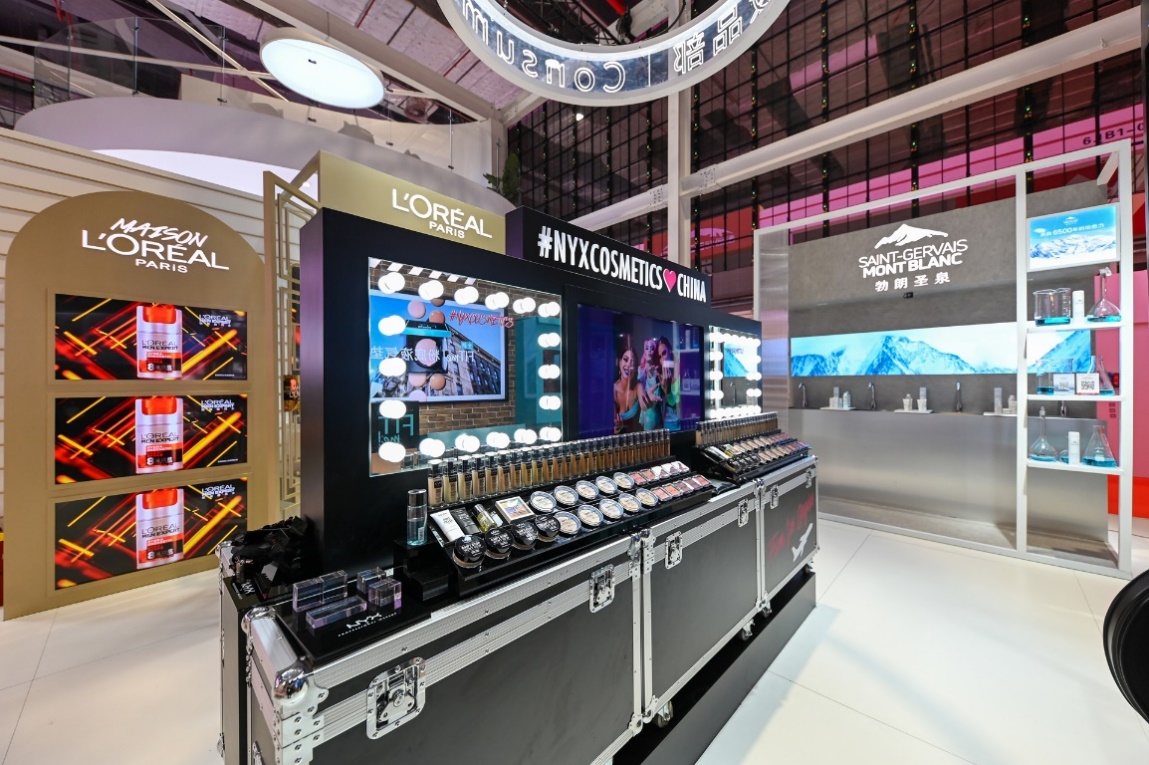 Top beauty and personal care companies from around the globe will showcase more new offerings and bring innovative products to China after seeing fruitful results from their presences at the China International Import Expo in previous years.

For the world's largest beauty and personal care group L’Oréal, brands like 3CE Stylenanda, Urban Decay and Saint-Gervais Mont Blanc have debuted at the CIIE in previous years amid rising demand for specific skin-care and beauty needs.

They have attracted new buyers after being introduced into the China market via both online and offline retail channels.

Chinese sales of Saint-Gervais Mont Blanc also exceeded those in France — its home country — and became the biggest overseas market.

This year it will present over 100 new blockbuster products and various tech innovations.

L’Oréal sales in the first half dropped 11.7 percent but China sales surged 17.5 percent thanks to new product launches.

In the second quarter, sales growth picked up to 30 percent, from a 6.4 percent increase in the previous quarter, after retail foot traffic gradually returned around the country.

L’Oréal has been elected as the first Rotating Chairman of the Enterprise Alliance Council at the CIIE.

“Against the backdrop of international trade and commerce harmed by the global pandemic, China will hold the 3rd China International Import Expo as scheduled, which sends a signal of openness, inclusiveness, shared benefits, and win-win to the world and fuels the global economic development. It embodies people’s hope for a world of shared prosperity.” said President and CEO of L'Oréal China Fabrice Megarbane.

"We hope that on a world-class economic and trade exchange platform that is open, inclusive, and broad-based as the CIIE is, we can deliver the beauty of uniqueness, diversity, and inclusiveness to the Chinese consumers and gather the wisdom and power from around the world and across industries to generate ecological synergy, to realize good consumption, and to enable consumers, the society, and businesses to co-create new value," he added.

The company said it's determined to give full play to its experience as a leading exhibitor and a member of the enterprise alliance in order to support the CIIE Bureau to synergize the strength of exhibitors.

Having firms like L'Oréal China, Shanghai is home to regional headquarters of about 60 multinational skin-care and beauty products companies and has also attracted industry research facilities of different sizes and functions.

The market size of Shanghai's skin-care and makeup industry is expected to reach 100 billion yuan (US$14.3 billion) by 2025, from about 70 billion yuan last year, according to the Shanghai Daily Chemistry Trade Association.

Shanghai is widely considered a shopping paradise and a top-notch destination for purchases.

The city is also encouraging the latest technology and novel ideas to take root. Officials expect them to become new engines for upgraded consumption, and the CIIE is a platform to introduce new ideas and products.

Consumers’ appetite for beauty products has been intact after the hit of the novel coronavirus pandemic. As many as 56 percent of consumers said they will pay more attention to products with good value for money instead of brand names, according to an OC&C Strategy survey of over 500 domestic shoppers in July.

Over 60 percent have tried beauty devices at home after skin treatment centers were closed during the pandemic.

Over half have also shown more interest in new beauty brands, higher than their counterparts in the UK, the US and Europe.

Skin-care and makeup preferences have also been altered by the wearing of face masks, with less focus on lip color but more attention to eye shadow and product packages with more hygiene features.

Estee Lauder also announced in March to upgrade an existing Asia-Pacific research facility in Shanghai to fuel breakthrough beauty innovations in China and the global market.

Two of its fragrance brands, KILIAN and Editions de Parfums Frédéric Malle, which both made debuts at the CIIE last year, have made their first physical appearance in the country in Shanghai's IFC Shopping Mall in June.

"The third CIIE to be held as scheduled is a clear signature that China's economic development has stabilized. We're fully confident of the Chinese market and we're committed to bringing high quality brands and service to local shoppers,” said Joy Fan, president of the Estee Lauder Companies China.

This year it will add 100 square meters of space to its previous booth.

A total of 10 brands from Amore Pacific recorded 62 percent increase of sales from a year ago and attracted 2.6 million new buyers on Tmall's Singles Day event.

Many more exhibits at the CIIE by Amore Pacific have hit the retail shelves.

Hit products like IOPE 3D tailor-made facial mask, Makeon skin therapy device and espoir's lip colors have drawn many visitors at the CIIE booth, creating opportunities for the company to extend more influence among a wider consumer base.

Japanese beauty firm Shiseido also plans to increase exhibition space with China debut of products like THE GINZA and BAUM planned for this year.

China has remained Shiseido's largest overseas market since 2017 and in March this year, it announced the establishment of a research facility in the Oriental Beauty Valley in Fengxian District to focus on environmental and sustainability-related research and share resources with partners in the park.