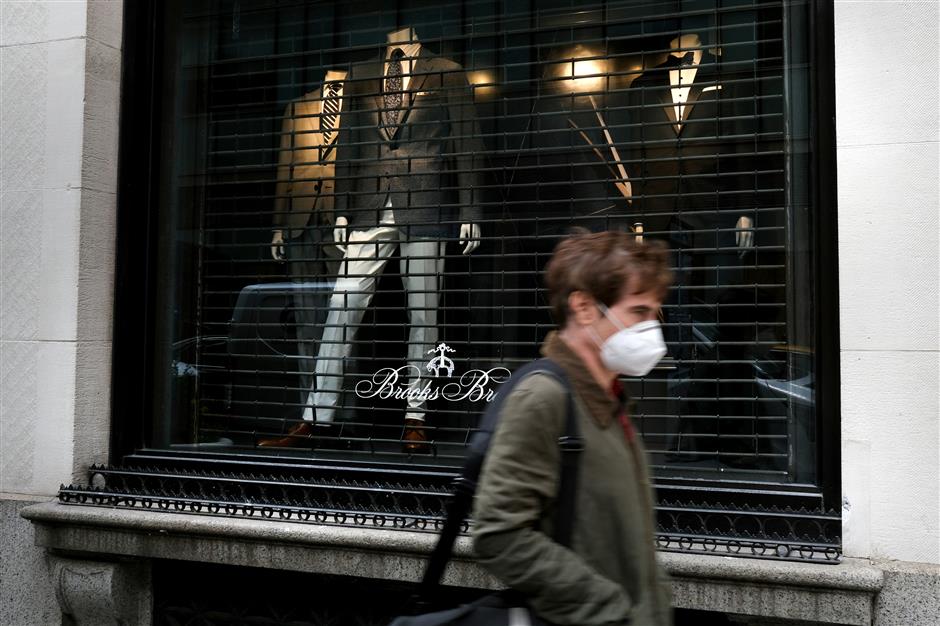 Men's business attire is displayed in the window of a Manhattan clothier on September 15, 2020, in New York City.

The Federal Reserve pledged on Wednesday to keep boosting the US economy with low rates to help recover the tens of millions of jobs lost in the pandemic, but said additional help from the government will be key.

Government stimulus provided in the early stages of the pandemic was "essential" to the better-than-expected progress made so far, Fed Chair Jerome Powell said, but another dose will likely be needed since the outlook remains "highly uncertain."

The Fed announcement came amid renewed optimism that the White House and Democratic leaders in Congress will reach a compromise on a new spending package, even as data showed spending gains have slowed and layoffs continue.

The policy-setting Federal Open Market Committee said it will keep interest rates low until it has achieved its goal of maximum employment, allowing inflation to push beyond 2 percent in order to spur job gains as the world's largest economy recovers from the COVID-19 pandemic.

Powell told reporters that "overall activity remains well below its level before the pandemic and the path ahead remains highly uncertain."

"It will take a while to get back to the levels of economic activity and employment that prevailed at the beginning of this year," Powell told reporters. "My sense is that more fiscal support is likely to be needed."

He noted that roughly 11 million people are still out of work due to the pandemic and as many were working in industries that are likely to struggle, "those people may need additional support."

Small businesses also continue to struggle, while state and local governments dealing with a drop in revenue at the same time spending has gone up, he said.

The median GDP forecast among the 17 FOMC members reflect the better-than-expected US recovery, and they now see the economy contracting by only 3.7 percent this year, compared to 6.5 percent drop expected in June.

However, growth expectations for 2021 and 2022 were more modest than previously.

US unemployment has fallen to 8.4 percent from its peak of 14.7 percent in April amid the most widespread pandemic business shutdowns, and the FOMC members' median forecast is for the jobless rate to end the year at 7.6 percent and drop to 5.5 percent by the end of next year.

"The labor market has been recovering but it's a long way from maximum unemployment," Powell said.

Powell, whose pleas have become increasingly urgent, said it is up to Congress to decide what form the aid will take.

Talks in Washington on a new bill to aid both workers and businesses hit by the coronavirus downturn have stalled for weeks, but Democratic House Speaker Nancy Pelosi and White House chief of staff Mark Meadows each made encouraging statements about the potential to break the impasse.

That message was quickly undermined by President Donald Trump, who renewed his attacks on Democrats while cheering a CNBC personality who called Pelosi "Crazy Nancy" in a live broadcast.

Pelosi and Senator Chuck Schumer slapped back at Trump but applauded his apparent call for more help.

"By the end of the week, 200,000 Americans will have died from the coronavirus. The lives and livelihoods of the American people depend on Republicans abandoning their obsession with doing as little as possible while the coronavirus rages through our nation," they said in a joint statement.

The Fed statement reaffirmed the policy shift that Powell announced last month, which means the central bank will keep rates low to return to maximum employment allowing inflation to heat up and hold above the 2 percent target for an extended period.

The new forecasts also show central bankers expect rates will stay at zero at least through 2023, while inflation is does not even reach 2 percent until the end of that year.

However, two FOMC members dissented in the vote, one indicating the policy might go too far, and the other that it was not aggressive enough.