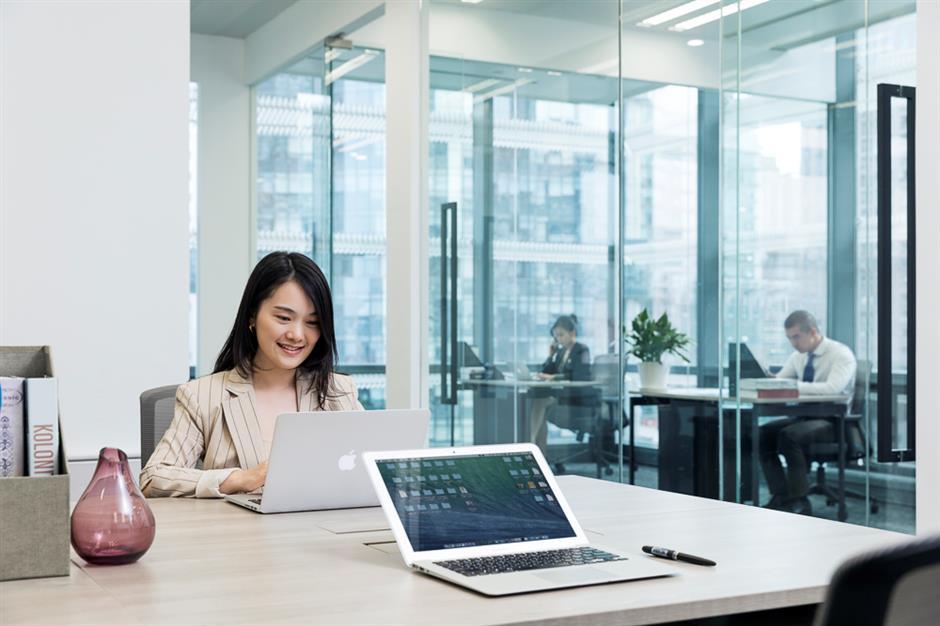 In the tranquil harbor front of Hung Hom Bay where a seaside promenade extends hundreds of meters and a ferry pier connects sea transports to North Point and Central, there exists a co-working space called theDesk — deep inside the Whampoa Garden residential community and located on the second floor of the Kerry Hotel.

For some time, surviving and thriving small and medium-sized companies, and to some extent, sole proprietors, have attracted constant discussions. The issue is felt more profoundly in a crowded urban environment such as Hong Kong, where land resources are scarce and rents are high. The economic and social phenomenon of co-working provided invaluable sustainability and growth opportunities for smaller operators.

Such attractions have not faded entirely and have resurfaced after initial setbacks at the outset of the coronavirus pandemic. James French, theDesk Hung Hom branch’s community manager, remains positive on the prospect of the co-working space industry during this uncertain time, despite the fact that Hong Kong has seen four major waves of infections.

French said his optimism comes from an observation that although the Hung Hom branch experienced a considerable drop in membership after the outbreak of the pandemic, a notable membership resurgence was recorded later on when unemployment became a sad reality and some companies started to cut costs by moving their entire workforces to co-working spaces. Meanwhile, more people became frustrated when working from home became a new norm, which often meant being confined in smaller living environments due to Hong Kong’s housing shortage, and started to prefer the flexible rental arrangements co-working spaces have to offer. According to the Census and Statistics Department, the seasonally adjusted unemployment rate was 7 percent in the period between November 2020 and January 2021, a 3.6 percent year-to-year increase.

Absolute numbers on desk occupancy do not dampen French’s optimism, as he believes the particular socioeconomic concepts that distinguish co-working spaces from other office settings that may appear similar are hard to match.

French said co-working represents a lifestyle of community and a spirit of entrepreneurial pursuit, not only a physical location.

“The ‘C’ in the word co-working is short for collaboration and community,” said French. “Co-working spaces are where like-minded individuals come together in a conducive and holistic environment to network, socialize, interact amongst members, share contacts, build social lifestyles and reach new markets for business development opportunities.”

On the contrary, French asserts that office spaces open for lease that lack the above characteristics and merely provide services such as a receptionist, mail, internet, telephones, cleaning, furniture and maintenance are not necessarily co-working spaces. They are in fact serviced offices.

“In a co-working space the community manager should be a connector and facilitator, providing growth opportunities in a socially friendly way for its members,” he said.

A former restaurant manager and son of restaurateur parents in Swansea, Wales, where he grew up, Mr French is confident the skills he learned in hospitality are very transferrable to a co-working environment.

“Hospitality is kind of in my blood,” he said.

According to French, the Hung Hom branch members’ business profiles range from information technology to finance to graphic design, and are not all startups. More often than not they are sole proprietors already in operation for some time, while some are individuals working for multinational companies based outside Hong Kong. The Hung Hom branch opened in August 2020 to replace Kafnu, which operated at the same location, is theDesk’s sixth location in Hong Kong and seventh overall including one in Shanghai. The company was founded by Thomas Hui in 2014.

(Hongyu Wang is a master's student in journalism at the University of Hong Kong.)