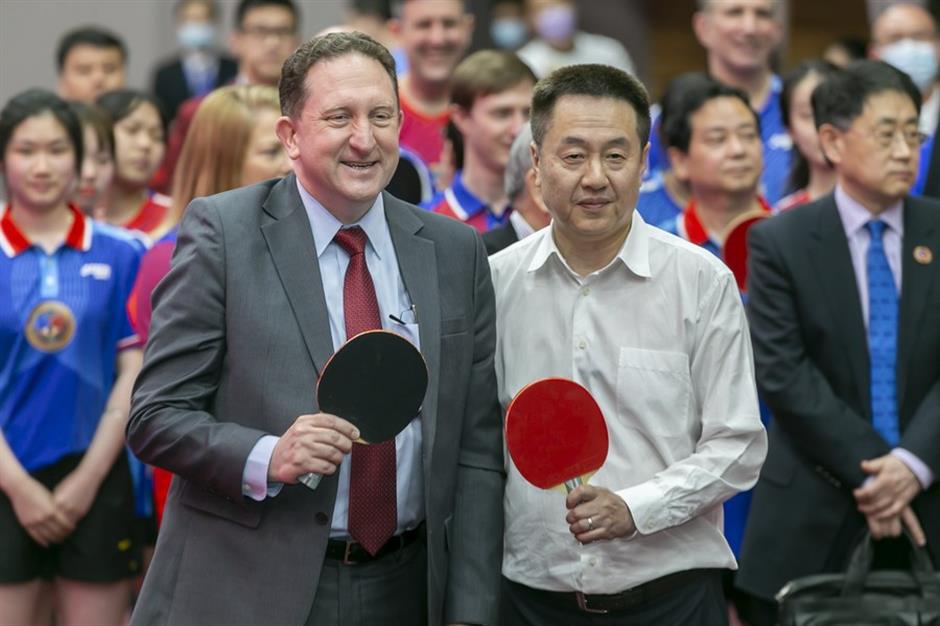 Vice president of the International Table Tennis Federation Shi Zhihao (R, front) and the US Consul General in Shanghai James Heller (L, front) pose for photos after playing the first shot for a China-US Ping-Pong friendly match during a special event to commemorate the 50th anniversary of the Ping-Pong Diplomacy between China and the United States in Shanghai, east China on April 10, 2021.

Shanghai, the city that witnessed "ping-pong diplomacy" between China and the United States in 1971, has played an important role and immensely benefited from the China-US economic and trade exchanges, according to entrepreneurs and experts in the city.

During a series of commemorative events on the 50th anniversary of "ping-pong diplomacy," some impressive investment and trade figures involving the two countries were released.

"Despite the extremely difficult situation in 2020, the bilateral trade continued to grow, which fully shows that the exchanges and cooperation between China and the United States are in line with the two peoples will," Sha Hailin, chairman of the Shanghai People's Association for Friendship with Foreign Countries, told Xinhua.

According to Huang Feng, president of the Shanghai Foreign Investment Association, after "ping-pong diplomacy" kicked off the normalization of China-US relations, American enterprises grasped the opportunity to launch their business in China and aimed at Shanghai as the entry point.

From the end of the 1970s to 1990, a batch of famous US companies including Coca-Cola and Pepsi entered China through Shanghai. Foxboro set up the first China-US high-tech joint venture, while 3M became the first wholly foreign-owned enterprise in the city, said Huang. 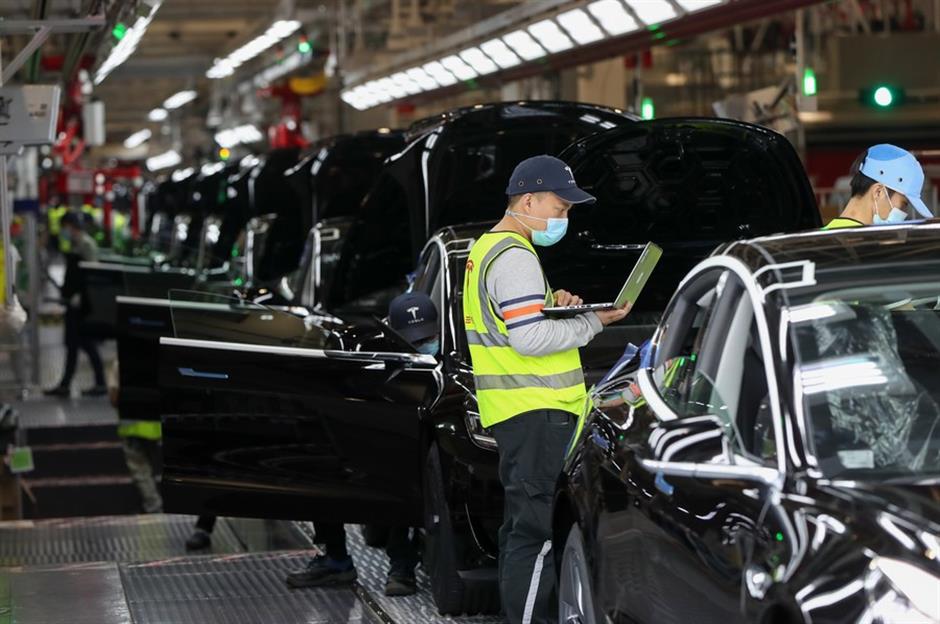 Employees work at the Tesla Gigafactory in Shanghai, east China on November 20, 2020.

The 1990s saw the advent of big names such as Intel and insurance company AIA in Shanghai. General Motors' joint venture became the largest investment project of US enterprises in the metropolis during this period, with the first phase investment exceeding US$1 billion, Huang added.

Over the past two decades, the service industry has gradually become a key area for foreign investment in Shanghai. The city has also further expanded its opening up with the establishment of the Pilot Free Trade Zone, benefiting more US companies. The Shanghai Disney Resort and Tesla's Gigafactory Shanghai have both become success stories, he noted.

American entrepreneur Owen Messick was only eight years old in 1971 when his mother, a librarian, started encouraging him to read books on China. In the mid-1980s, Messick made his first trip to the Asian country, which further augmented his interest in China.

Seven years ago, Doterra, an American company engaged in the production and marketing of essential oil, opened a wholly-owned subsidiary in Shanghai, and Messick was appointed as the president.

In November 2018, Doterra participated in the first China International Import Expo held in Shanghai. At the end of that year, Doterra upgraded its Shanghai subsidiary to a regional headquarters and started the construction of a Chinese factory and its first overseas laboratory in Shanghai.

Seven years ago, many Chinese did not understand what essential oil was, but today Doterra has nearly one million registered members in China, said Messick.

It was the ping-pong diplomacy 50 years ago that opened the door for the economic and trade exchanges between the United States and China, setting a historic landmark, Messick added.