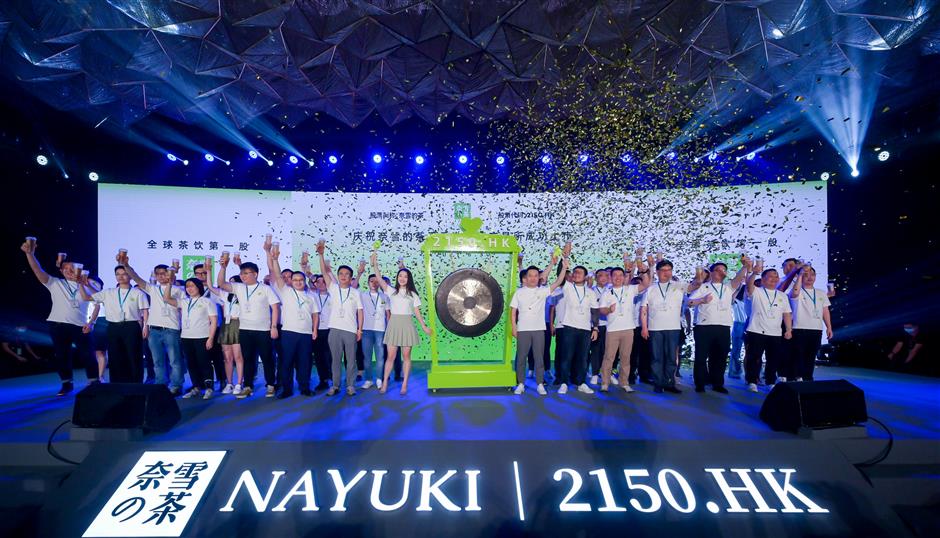 The Shenzhen-based company founded by husband-and-wife duo Zhao Lin and Peng Xin priced its listing at the top offering range of HK$19.8 per share with 257.3 million new shares.

The Shenzhen-based company founded by husband-and-wife duo Zhao Lin and Peng Xin priced its listing at the top offering range of HK$19.8 per share with 257.3 million new shares.

Shares closed 15.15 percent lower on Wednesday as some fear competition with another leading premium teahouse HeyTea and entry-level milk tea stores like MXBC Tea would drag down performance.

The tea chain store began expanding in the domestic market in 2017 after opening its first store in Shenzhen in 2015, featuring fruit-based fresh tea as well as bakeries, snacks and coffee drinks.

Last year, the company's revenue increased by 22 percent to 3 billion yuan (US$465 million), but it sustained a net loss of 203 million yuan.

Nayuki plans to use 70 percent of the IPO proceeds to open new stores and enhance technology and operations infrastructure, with an ambitious blueprint to more than double its outlets in three years to over 1,000.

"Emerging teahouses and beverage vendors have successfully responded to consumers' lifestyle change to pay a small premium to treat themselves, " said Jason Yu, managing director at Kantar Worldpanel China. "But Nayuki hasn't become a dominant tea brand yet like Starbucks in the coffee category, which requires long term brand-building efforts."

"We've come at the right time to popularize the Chinese tea culture and tea-drinking lifestyle," he said.

Emma Xiao, a partner at the strategy consultancy firm Ries China, estimates the freshly made tea drink market to maintain strong growth momentum in the next five years, and make up 44 percent of the 765-billion-yuan domestic tea beverage market by 2025. Tea powders, tea bags and other packaged tea drinks will be relatively small players.

Freshly made tea beverages will be the major growth driver in the tea beverage sector, with 24.5 percent annual compound growth in the next five years, while packaged tea beverage sales will remain relatively flat due to similarities across different brands, Xiao added.

"Market leaders like Nayuki and Heytea are still fighting for an iconic brand image to differentiate beyond the product perspective, and Nayuki's listing could help it speed up the expansion pace to build up a competitive edge," she said.

A total of 45 companies completed listings on the Hong Kong market in the first half of this year, with more than 80 percent of IPOs coming from Chinese mainland companies, accounting for 97.5 percent of total proceeds, according to consulting firm EY.

"With the inclusion of STAR in the Shanghai-Hong Kong Stock Connect, adjustments to constituent stocks of the Hang Seng Composite Index and the further advancement of the simplified listing system for overseas issuers, the IPO market in Hong Kong is expected to become more attractive and competitive," said Lawrence Lau, EY assurance partner.

The return of China concept stocks will have greater impact on total proceeds, while new listings in Hong Kong will also include those in the consumer goods and telecommunications, media and technology (TMT) sector, Lau said.