Symposium focuses on development in Lingang

A symposium held today examined the development of the Lingang area.

The 12th Symposium on Chinese Scholars and Shanghai Development in the 21st Century kicked off with the theme "Eyeing the Future, Lingang Special Area" during which a number of experts, scholars, government officials and corporate executives put their heads together to discuss the challenges and potential of Lingang's development.

Ding Zhongli, an academic at the Chinese Academy of Sciences and vice chairperson of the Standing Committee of the National People's Congress, suggested the area should emphasize all-around innovation in systems and regulations, broader implementation of high-level opening-up policies and an innovative ecology covering the entire process.

Ding also stressed the importance of attracting and retaining talent from China and abroad.

Qian Feng, an academic at the Chinese Academy of Engineering, brought the sci-tech innovation to the fore.

China ranked fourth in the manufacturing power development index, according to a report published at the end of 2020 by the Chinese Academy of Engineering, following the United States, Germany and Japan. However, the lack of innovation capacity is currently a key barrier to the country's development of cutting-edge industries, which has to be overcome to fuel economic growth, Qian pointed out.

Based on stronger sci-tech innovation, the area should focus more on high-end industries, such as integrated circuits, artificial intelligence, biomedicine and civil aviation, which can then lead to faster development and even breakthroughs in core technologies, including core industrial software and new materials, Qian said.

Xie Dong, head of Shanghai's local Financial Supervision and Administration Bureau, shared her views on the city's construction of an international financial center and Lingang's role in this development.

She proposed the Lingang area should focus on establishing major platforms, such as ones for international financial asset transactions, a national registration center for warrants of commodities and cross-border transfer of domestic trade financing assets. 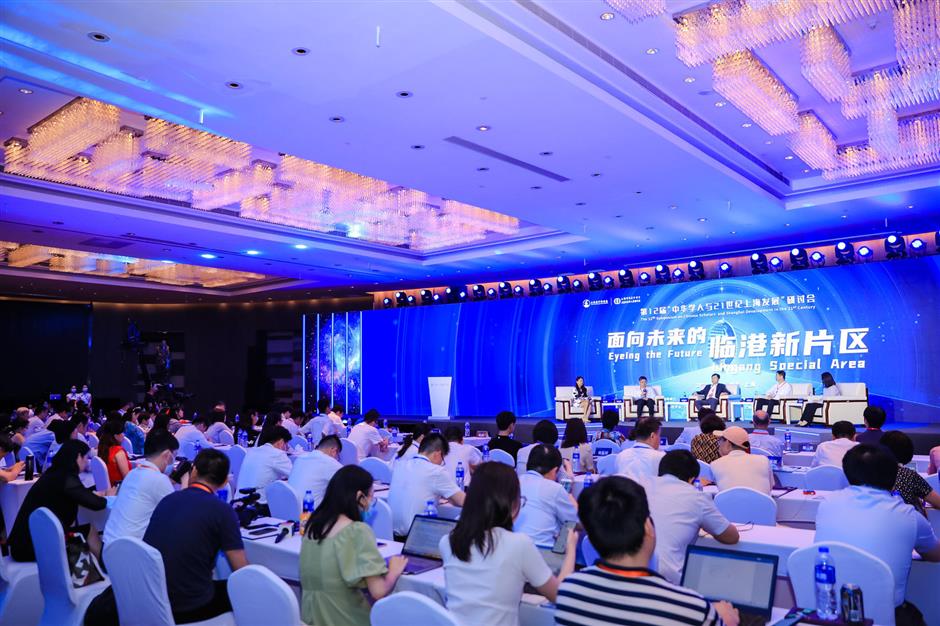 Experts, scholars, government officials and corporate executives discuss the challenges and potential of Lingang's development at the 12th Symposium on Chinese Scholars and Shanghai Development in the 21st Century.