Shanghai is making steady progress with its strategic master plan to build five "new cities" in suburban areas over the coming decade and beyond, officials from various government departments told a press conference on Friday.

Overall planning for the five "new cities," namely Jiading, Qingpu, Songjiang, Fengxian and Nanhui, has been completed, while design work for 23 key areas, including 10 demonstration zones, is also proceeding smoothly, according to Xu Jian, deputy director of the Shanghai Urban Planning and Natural Resources Bureau.

"Construction on about 40 major industrial projects, including the Hesai mega factory in Jiading and the Tencent AI supercomputing center in Songjiang, are in full swing at the moment, all developing in line with the differentiated positioning of each 'new city'," Xu said.

"Meanwhile, two regional headquarters of multinational companies, four research and development centers of foreign-invested enterprises, as well as a batch of industrial and R&D projects, have been added to the five 'new cities' during the first half of this year." 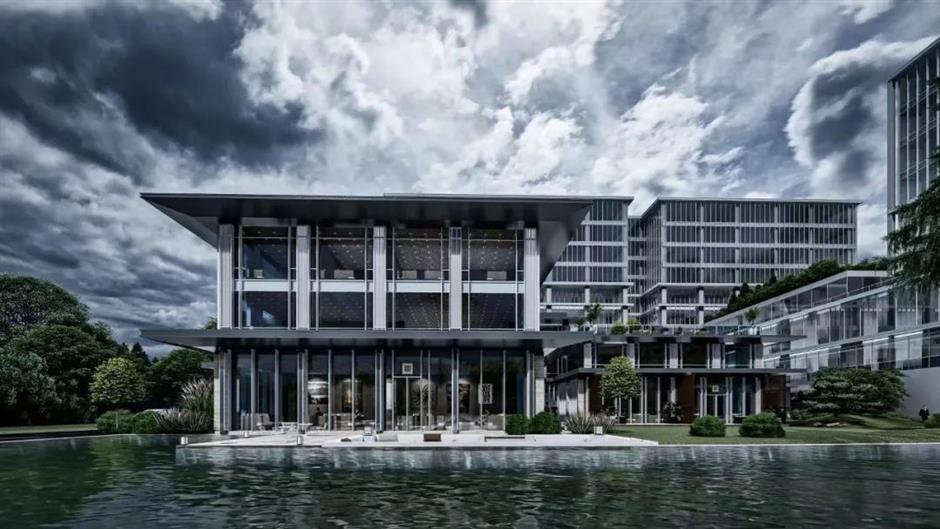 Shanghai first unveiled its plan to build the five "new cities" in January when it released its 14th Five-Year Plan (2021-2025), saying they will be developed into conveniently accessed livable areas where urban life and industrial development are well integrated, with each leveraging its own strength for future growth.

In Jiading, which has auto manufacturing, intelligent sensors and the Internet of Things, and high-performance medical equipment and precision medicine as its three key industries, a total of 37 manufacturing- and service industry-related projects are progressing in full steam.

In Qingpu, which focuses its development on the digital economy, 28 key projects with a total investment of around 9.8 billion yuan (US$1.52 billion) have been introduced during the first six months.

In Songjiang, whose future growth will be mainly driven by intelligent manufacturing, electronic information as well as culture and tourism, a number of heavyweight projects including the Tencent AI supercomputing center, the Henlius biopharmaceutical industrial base and the Yangtze River Delta International Film and TV Center are gaining strong policy support to expedite their development.

In Fengxian, site of the Oriental Beauty Valley which is a business hub focused mainly on the cosmetics, health and food industries, various efforts, including drafting supportive policies specifically catering to the biopharmaceutical industry, have been made to further consolidate its leadership as China's top cosmetics hub and move further toward its goal to stand out on the global stage.

In Nanhui, which prioritizes integrated circuits, biomedicine, new-energy vehicle and intelligent equipment industries for its future economic growth, 111 projects with a total investment of 116.5 billion yuan have been signed year to date.

To improve the accessibility and livability of the five "new cities," which have set a goal to have more than 5 million permanent residents by 2035, 50 public service projects covering education, health, cultural and tourism, and sports are either under construction or about to commence soon.

Construction of 17 key traffic infrastructure projects around the city, including the west extension of Metro Line 2 and the Jiamin Line, designed to provide a fast link for residents of Jiading and Minhang districts to the Hongqiao transportation hub, already kicked off in late June to boost connections to the five "new cities."

To optimize housing supply, authorities in the "new cities" will better allocate land resources and increase the plot ratio of residential parcels to increase supply. Leasing units will account for the majority of new build homes within 600 meters of metro line stations, catering to the needs of different groups.

Lands designated for public service facilities will account for 7 percent of the total land plan, whereas those earmarked for greenery space will take a 15-percent share. A multi-layer park system, for example, will be established in the five "new cities" to allow residents access to greenery within a five-minute walk.