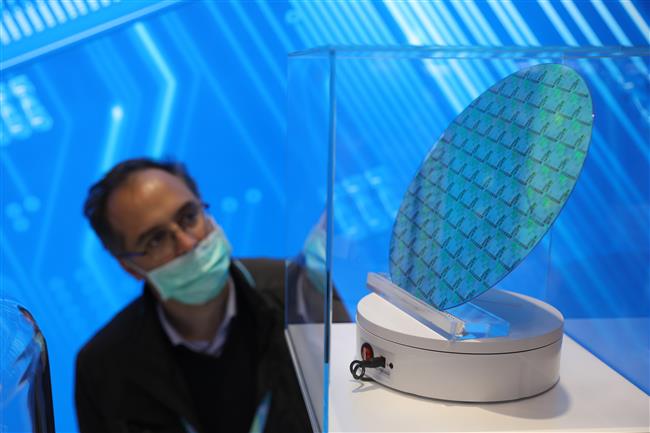 The Integrated Circuit Exhibition Area, which debuted at the 2021 China International Import Expo, attracted many visitors.

Shanghai is stepping up support for the integrated circuit and software industries as it rolls out new measures to boost the strategic sectors, according to Shanghai Development and Reform Commission.

The measures follow government consultation with key industry players, and are the latest response to changes in the domestic and foreign environments.

"As the industrial chain of the industries are getting more comprehensive in Shanghai, policies have to be improved to enhance support for them," said Qiu Wenjin, deputy director at the Shanghai Development and Reform Commission.

"The policy introduced in 2017 has expired and some measures are out of date, falling behind the latest trends."

The 27 new measures focus on six key areas, including talents support, enterprise incubation, financing support and R&D, aimed at expanding the scale of the industries and attracting more talent.

Good practices of the former policy will be kept while adding some new ones called on by industry leaders.

As an intelligence-intensive sector, the integrated circuit and software industries need high-level talents, which is a key part of the new policy.

Aside from improving the reward mechanism, the changes stress attracting and retaining talent, including housing incentives. Training is also highlighted.

Universities will shoulder the major talent-training task in return for access to companies' production lines.

Compared with the weight laid on manufacturing in the past, the new policy emphasizes materials, key parts and equipment.

"Key equipment and core materials to produce integrated circuits are the most basic weak link in the country's integrated circuit industry. The new policy will hopefully lead to breakthroughs in such fields during the 14th Five Year Plan (2021-2025)," said Guo Yiwu, secretary general at Shanghai Integrated Circuit Industry Association.

It is the fourth time Shanghai has reformed its policy support for the industries, after changes in 2000, 2012 and 2017.

Shanghai's software industry also maintained double-digit growth over the past four years and 28 more companies have listed on the exchange.

Shanghai has 200,000 professionals in the integrated circuit industry and 580,000 in software.