China has developed a world-class digital economy with "China wisdom," which bridges overseas brands and domestic consumers directly and empowers small businesses globally, speakers told a session of the Hongqiao Forum at the ongoing China International Import Expo on Saturday.

A Regional Comprehensive Economic Partnership, or RCEP, cross-border e-commerce index report was also released at the forum, showing rapid growth and the huge potential of the e-commerce industry during the pandemic.

The forum, with the theme Opening-up and Governance of Digital Economy, attracted speakers including government officials, academicians and business executives, such as Daniel Zhang, Alibaba's chairman and CEO.

China's digital economy accounts for 39.8 percent of total GDP, compared with 21.6 percent in 2012. The digital economy volume reached 45.5 trillion yuan (US$6.32 billion), ranking as the world's No. 2 only behind the United States. As well as these figures, the country has its own "China wisdom" on development, said Li Fei, Assistant Minister of Commerce.

Pamela Coke-Hamilton, executive director of the International Trade Center, told the forum in a video speech that trade and communications bring various benefits to small businesses and consumers, making the world "more connected in a sustainable way". 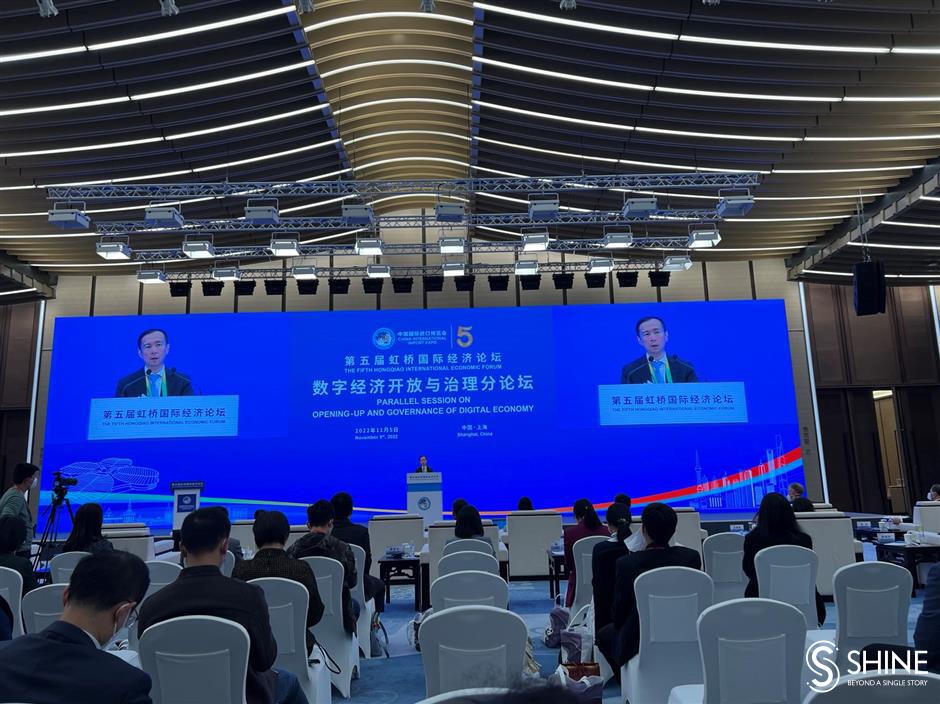 The RCEP SME (small and medium enterprises) B2B Index, with measures on trade volume, enterprise development and market diversification, almost doubled between 2019 and 2021, with an average annual growth rate of 34.4 percent. The figures are based Alibaba's and research analysis by experts from Zhejiang University.

The 15 countries in the RCEP region have a total population of 2.27 billion, contributing GDP that accounts for about one-third of the global level.

The digital methods mean global trade is still active despite challenges like the pandemic and an uncertain geopolitical environment, the company's CEO Zhang said.

With digital methods like e-commerce, artificial intelligence and cloud, the trade and the whole supply chain stability are predictable.

During the Singles Day online campaign in China, similar to the Cyber Monday event in the West, more than 750 overseas brands doubled transaction volumes in Alibaba's TMall online stores this year.

The company will invest more on digitalization in logistics and supply chain in the future, as it has established 12 global core logistics network centers, Zhang said.

In the next five years, the digital economy volume in Zhejiang Province, where Alibaba's headquarters is located, will double from the level of 2021.

Province Governor of Zhejiang Wang Hao said the province will improve the business environment while strengthening digital governance, such as the protection of personal information.

Business executives, from companies such as Microsoft and Accenture, also shared their visions on the digital economy at the forum.

"We care about data management and data governance, a key part of making the digital economy development sustainable," said Roan Kang, vice president of Microsoft, which has attended CIIE for five consecutive years.

Kang mentioned regulation compliance for data used in cloud and AI in regional markets including China.

Samantha Zhu, chairperson of Accenture China, shared her visions for multinationals' opportunities as the digital economy opens up.

Almost 60 percent Chinese companies will increase investment in digitalization within one or two years, with 33 percent of companies planning a 15 percent increase or more, as digitalization is required by all, Accenture said in its China Digital Transformation Index research recently.