Changshu to build closer industrial and manufacturing ties with Shanghai 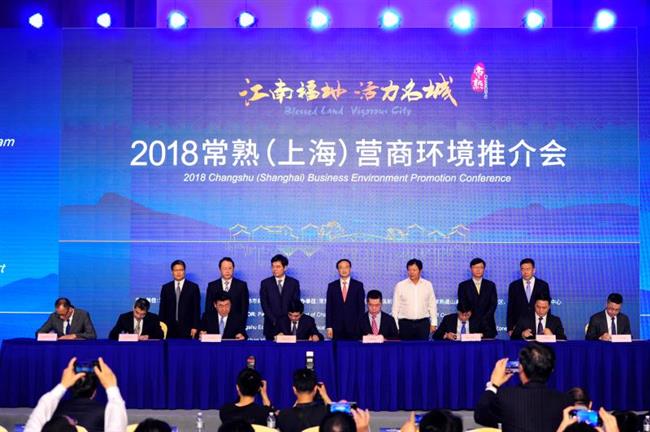 Forty-seven projects to be launched in Changshu with a total investment of 36.8 billion yuan (US$5.75 billion) were signed during the conference. They cover industries like automobile, garment, new material, new energy, new generation of information technology, environment protection, and modern services.

Changshu, a city in Jiangsu Province about one hour’s drive away from Shanghai, will try to further synchronize its industrial upgrading with places in the Yangtze River Delta Region, especially Shanghai, to boost its industries like manufacturing and garments.

“Changshu is capable of fast response to industrial upgrading and is good at interacting with neighboring cities,” Changshu Party Secretary Wang Yang said during a recent conference to introduce the city’s improved business environment.

“We hope to further integrate into the coordinated development of the Yangtze River Delta Region, and we are especially interested in partnering more with Shanghai to grow the sector of advanced manufacturing,” Wang said.

Changshu and Shanghai have already channeled in more resources for better connection. According to Wang, within two to three years people will be able to travel between the two cities within 20 minutes via high-speed train.

A committee made up of experts in the manufacturing sector from both Shanghai and Changshu was established at the conference, in a bid to promote further cooperation.

Also, 47 projects to be launched in Changshu with a total investment of 36.8 billion yuan (US$5.75 billion) were signed during the conference. They cover industries like automobile, garments, new materials, new energy, new generation of information technology, environmental protection, and modern services.

Earlier this month, top officials in Shanghai, Zhejiang, Jiangsu and Anhui provinces held a meeting, with a focus on accelerating coordinated growth in the Yangtze River Delta Region following a call to action from Chinese President Xi Jinping.