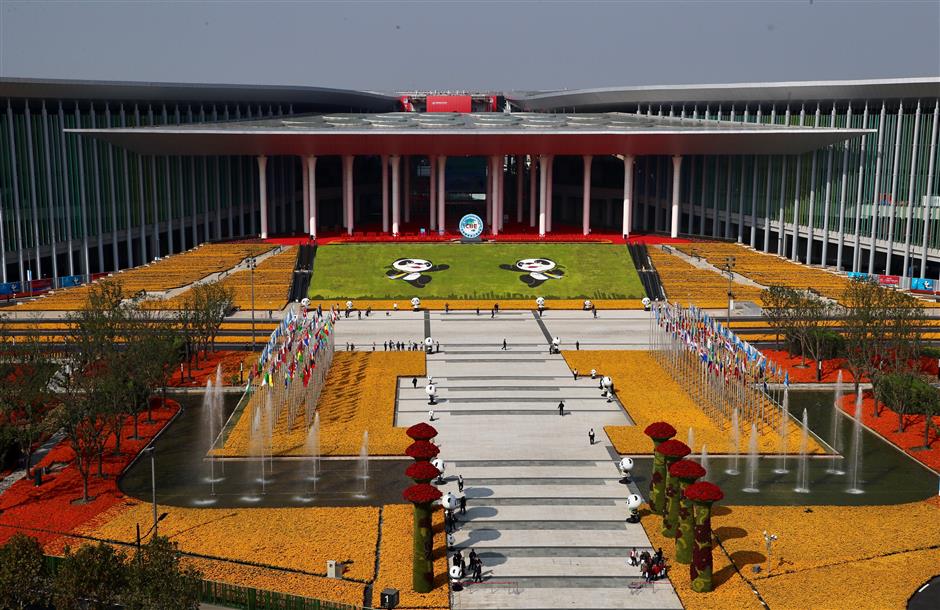 The first China International Import Expo concluded on Saturday with a total value of US$57.8 billion in intended deals signed.

The CIIE attracted 172 countries and regions, three international organizations, more than 3,600 enterprises as exhibitors, and over 400,000 buyers from home and abroad, said Sun Chenghai, deputy director of the expo bureau.

The expo covered an exhibition area of 300,000 square meters. As of midday on November 10, the total number of people entering the exhibition center had surged 800,000.

A total of 71 pavilions were set up in the national exhibition by 82 countries (including China) and three international organizations — the World Trade Organization, United Nations Industrial Development Organization, and International Trade Center.

The pavilions of the 12 host countries and other participating countries all had distinctive styles highlighting their own characteristics, and made full use of technology to display their unique regional cultures and advantageous industries, covering trade in goods and services, industrial conditions, investment and tourism, as well as products with unique features.

The 1,500-square-meter China Pavilion took the new development concept of "innovation, coordination, green, openness and sharing" as the main thread to display the achievements of China's reform and opening up and the new opportunities it has brought to the world.

In terms of the commercial exhibition, it attracted 3,617 companies from 151 countries and regions to exhibit their technology, services or products, with more than 570 new products, new technologies or services launched.

The first CIIE achieved, on a yearly basis, an accumulative intended deal value of US$57.83 billion signed.

Among them, US$16.46 billion was in the smart and high-end equipment exhibition area, US$4.33 billion in the consumer electronics and home appliances section, US$11.99 billion in the auto area, and US$3.37 billion in apparel and consumer goods. The food and agricultural products exhibition area clinched intended deals worth US$12.68 billion in total, the figure in the medical equipment and medical care area reached US$5.76 billion, and the service trade area it was US$3.24 billion.

Of note, transaction agreements with total value of US$4.72 billion were signed with the countries along the Belt and Road.

Meanwhile, over 370 support activities were held during the expo. At the supply-demand matchmaking fairs from November 6 to 8, a total of 1,178 exhibitors and 2,462 buyers from 82 countries and regions had several rounds of one-to-one talks on-site, and reached intentions for 601 further field visits and signed preliminary agreements on 657 transactions.

At the first Hongqiao International Economic and Trade Forum, an important part of the CIIE, over 40 leaders of relevant countries and regions, distinguished guests of industries and academia, and people in charge of international organizations, had discussions about stimulating new vitality in global trade, and more than 2,400 government representatives, exhibitors, purchasers and business representatives from relevant countries and regions attended the forum.

President Xi Jinping put forward higher standards and requirements for better hosting the expo in his keynote speech at the opening ceremony, stressing that "the CIIE, an event to be held on an annual basis, will feature good performance, good results and continued success in the years to come."

"We will review our experiences from all angles and also learn from the international first-class expo, to further promote the CIIE to be more international, professional, market-based and branded," Sun said.