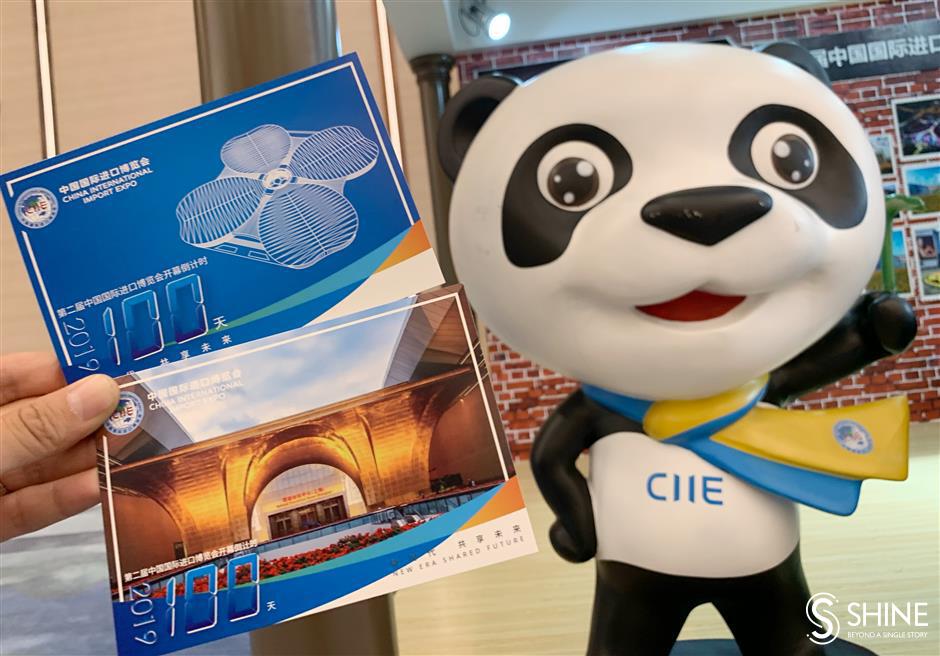 Commemorative postcards, in two versions, have been issued to mark the 100-day countdown to the second CIIE.

The second China International Import Expo, to be held at the National Exhibition and Convention Center in Shanghai from November 5 to 10, will have more participants and an expanded exhibition area at 300,000 square meters, 30,000 square meters larger than last year’s event.

So far, 61 countries have confirmed their participation in a 30,000-square-meter national pavilions area, including 15 honorary guest countries that include France and Italy, Vice Minister of Commerce Wang Bingnan said at a press conference on Friday to mark the start of the 100-day countdown.

More than 3,000 enterprises from over 150 countries and regions have confirmed they’ll take part — both numbers an increase from last year. More than 250 of them are Global Fortune 500 companies and leaders in various industries.

The seven sections will be sci-tech life, automobiles, equipment, medical equipment and health care products, quality of life, trade in services, and food and agricultural products.

Wang said the second expo will see many new highlights in the innovation of exhibition forms, setting up an experience area, an interactive area, an outdoor zone for self-driving cars and a special area to showcase intangible cultural heritage.

First-time exhibitors will include GlaxoSmithKline and Siemens, showing their latest products for the Chinese market.

Last year, more than 170 American companies took up more than 36,000 square meters of exhibition space, according to Ren Hongbin, assistant minister of commerce and deputy director of the CIIE’s organizing committee office.

This year, US companies are even more enthusiastic, with more exhibitors and a 35 percent increase in exhibition space.

“You can see the huge appeal of the Chinese market to enterprises both at home and abroad, including US companies,” Ren said.

“Even if there is trade friction between China and the United States, it can not stop American companies from attaching great importance to and showing great enthusiasm for the Chinese market.”

On July 19, Vice Premier Hu Chunhua said that the focus of preparatory work for the second CIIE has shifted from attracting exhibitors to seeking buyers and organizing the expo.

So far, 39 trading groups and nearly 600 trading subgroups have been formed by various provinces and cities.