With 100 days to go before the second China International Import Expo, China is pressing ahead to pursue more diversified, higher-end consumption choices and greener growth via the CIIE platform.

The second CIIE, slated to take place in early November in Shanghai, has attracted more than 3,000 companies from over 150 countries and regions to sign up, surpassing the numbers of the first expo.

More than 250 of the Fortune 500 companies and other leading enterprises are expected to participate in the expo, according to the organizer.

As China becomes a major buyer in the global marketplace, a more open CIIE with a higher level of exchanges is ready to create more dividends for the world to share. 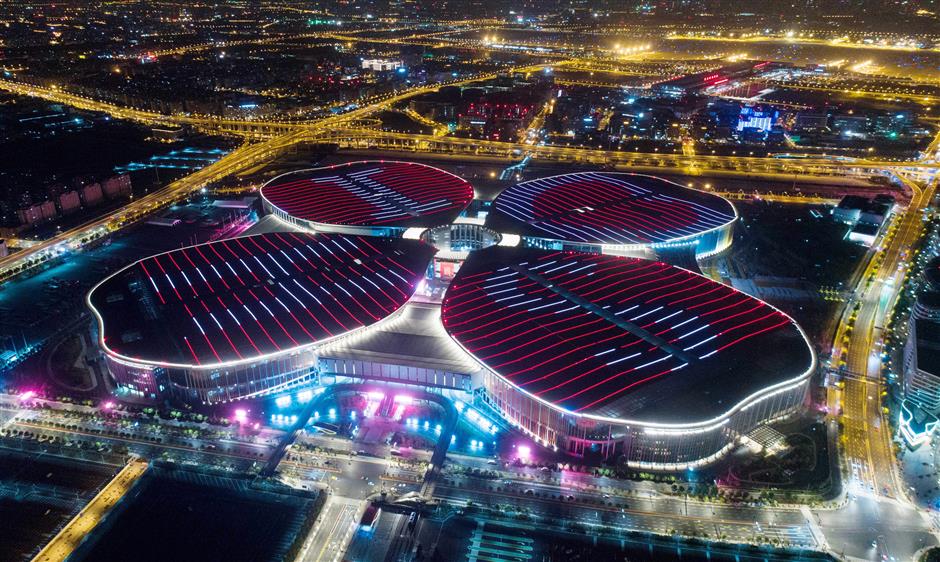 "The first CIIE reinforced our confidence in China's business environment policies and enabled us to see the country's continuously growing domestic market demand, which is like conducting large-scale consumer research ourselves," said Fabrice Megarbane, CEO of L'Oreal China.

By displaying the brand-new beauty products and technologies, the company is confident of targeting "Chinese appetite" more precisely in the second CIIE, according to Megarbane.

Deals for intended one-year purchases of goods and services worth a total of 57.83 billion U.S. dollars were reached in the first CIIE, held from November 5 to 10 last year in Shanghai.

The astonishing scale of the Chinese market and the more diversified consumer demands have attracted overseas investors and enterprises to take a share. 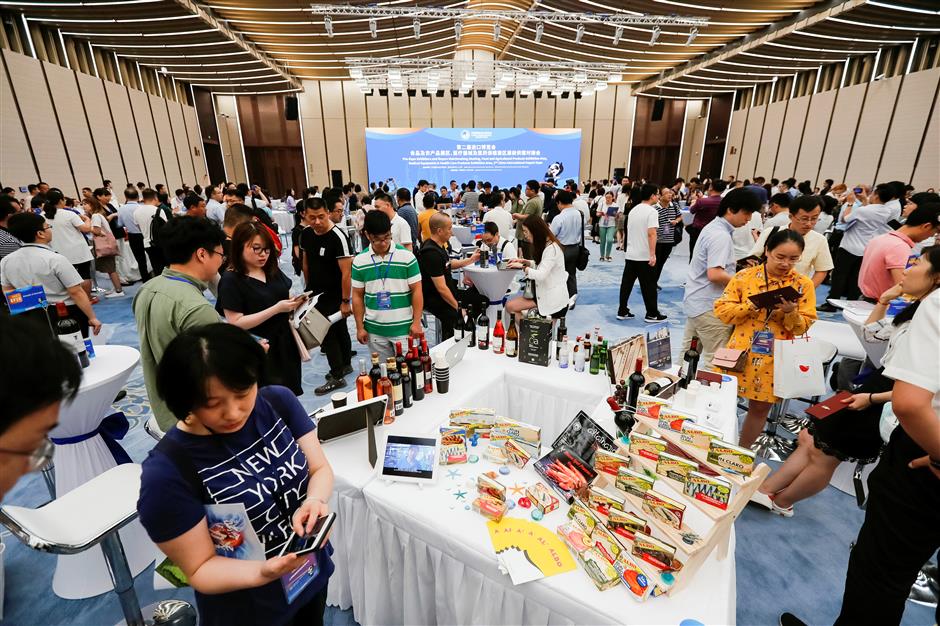 Kanpura s.r.o., a Czech crystal glass manufacturer with a century-old production base, plans to build a new design studio in China and invite designers from China and the Czech Republic to co-design new products that cater to the "Chinese appetite."

Chinese consumers have asked the company to adjust their designs of liquor glasses so they "look big, but have a very small capacity," and the new design will not only add gold foils to the bottom but also reduce the capacity by a third, according to the company. The new products, including the cup, are expected to debut at the expo this November. 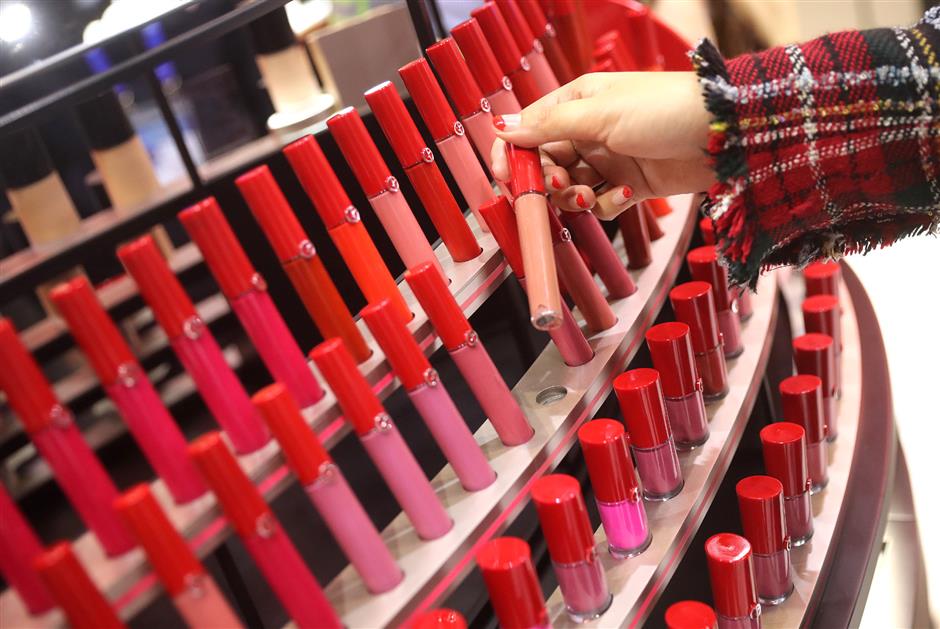 A visitor tries on makeup at the booth of L'Oreal at the first China International Import Expo in Shanghai, east China, on November 6, 2018.

This year's expo will increase the floor space for exhibitors to more than 300,000 square meters, creating platforms for companies to launch their new products, technologies and services, said Sun Chenghai, vice director of CIIE Bureau.

More AR and VR technologies, self-driving cars, The Internet of Things and blockchain technology will join the upcoming expo, where an exclusive exhibition area will be designated for high-end consumer goods.

Shanghai Shen Kang Hospital Development Center procured large quantities of medical equipment worth about 430 million yuan (about US$63 million) in the first CIIE.

This year, the center plans to purchase medical equipment worth about 460 million yuan at the expo, including two of the world's most advanced surgical robots.

The expo makes bulk purchases more convenient and offers a golden opportunity for the world's cutting-edge technologies and innovations to get closer to buyers, according to Li Bin, director of the center's assets supervision department.

New products and technological innovations to be launched are expected to exceed the first expo as well. 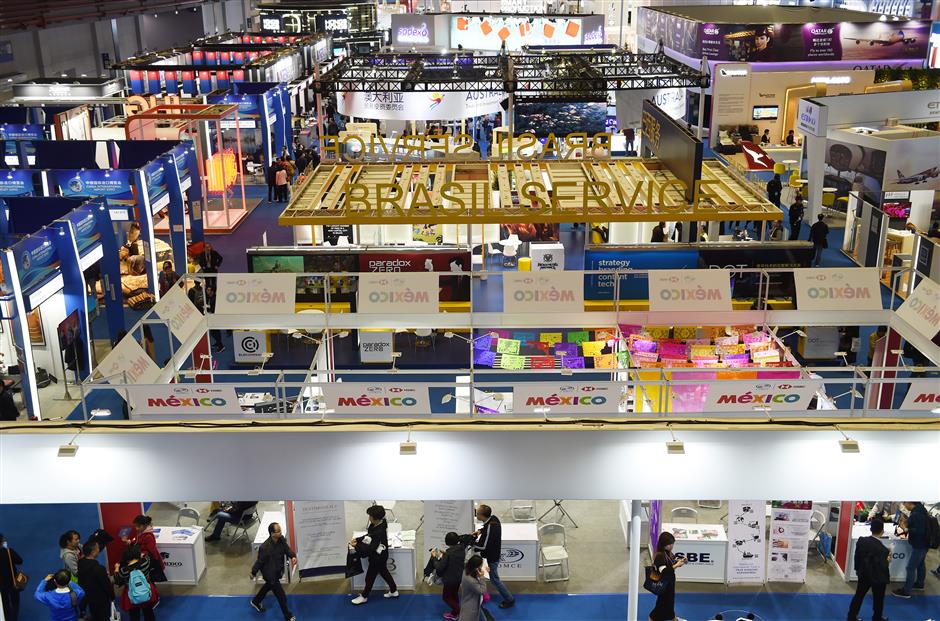 Visitors are seen at the Trade in Services area of the first China International Import Expo in Shanghai, east China, on November 10, 2018.

"The second CIIE will build a platform for the launch and display of new products and technologies. It demonstrates China's determination and confidence to implement free trade, and will further improve people's living quality and promote domestic consumption," Sun said. 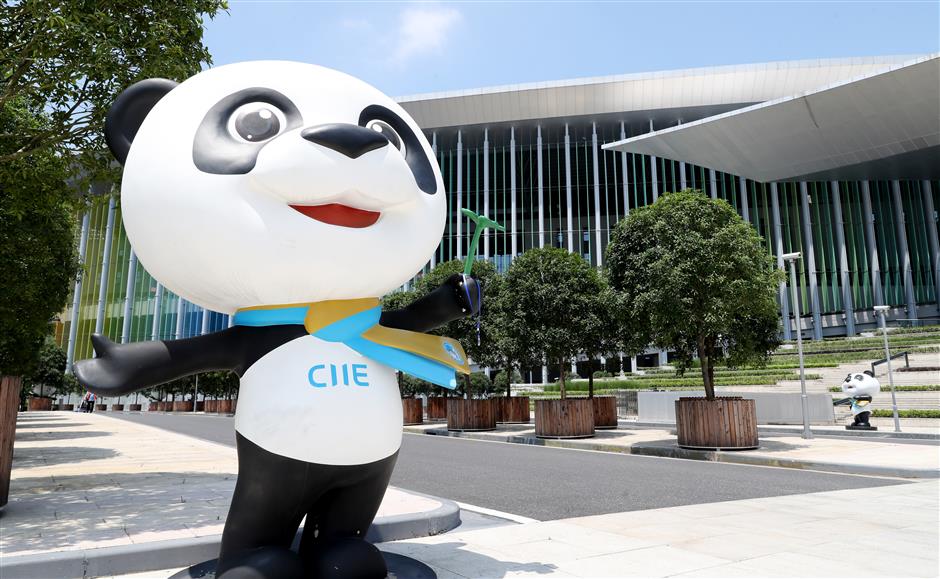 Jinbao, mascot of China International Import Expo, stands at the National Exhibition and Convention Center (Shanghai), the main venue of the first CIIE, in Shanghai, east China, on July 26, 2019.

The National Exhibition and Convention Center, the annual expo's venue, has carried out garbage sorting in preparation for the second CIIE, as the expo sets to become more eco-friendly.

Twelve electric shuttle buses, more than 2,000 240-liter trash bins with a newly formed team of more than 30 people are ready to ensure the proper disposal of waste during the expo, said the organizer.

Garbage sorting guides at the venue will also publicize the must-know knowledge of garbage disposal via broadcasts, electronic screens and brochures for participants.

Earlier this month, Shanghai piloted compulsory household garbage sorting and recycling, as the country wages war against the haunting headache of garbage disposal to promote green growth and develop a circular economy.

British design brand Joseph Joseph Ltd, a new exhibitor at the second CIIE, is expected to showcase its latest sorting bins, which can facilitate a more convenient sorting process as waste is stored according to type.

Priced at more than 2,000 yuan to 3,000 yuan, the bins designed by Joseph Joseph Ltd. were soon sold out in China's mid-year shopping festival, which has underlined the robust consumer spending in the world's second-largest economy.

Australia's Amcor group, the world's leading packaging company, signed up early this year to exhibit at the second CIIE. Many products familiar to Chinese consumers use the company's packaging, such as Dove chocolates, Lay's potato chips and Dettol hand sanitizers.

"About 200 to 300 million Amcor packages are active in the Chinese market every day, about 40 percent are recyclable or reusable," said Dong Meixu, vice president of Amcor China.

"Amcor has made a commitment to make all of its products recyclable or reusable by 2025 so that in the future you can use our packaging and put it in the recycling bin without much thought," Dong said.

In June, Amcor completed an acquisition, bringing its total factories in China to 13. The company also plans to open its first digital packaging research and development center in China and build a global smart factory showroom.

Shanghai's implementation of garbage sorting is encouraging, which has made the potential of the Chinese market even greater for Amcor, according to Dong.