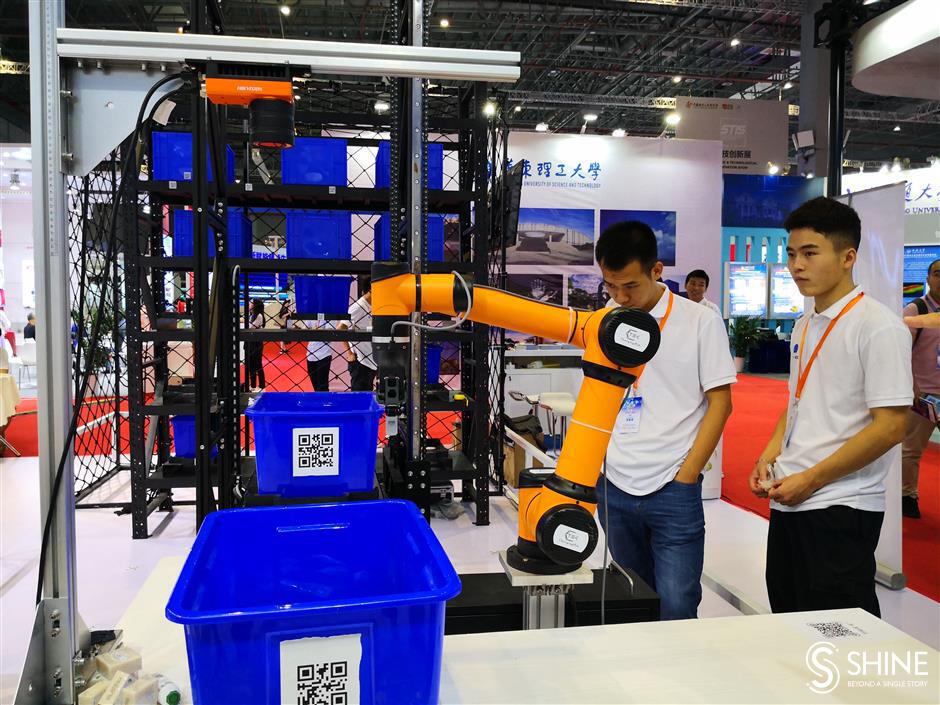 The RLOM reverse logistics platform in operation at the China International Industry Fair.

More than 750 inventions, technologies and entrepreneurial programs from universities are on display at the 21st China International Industry Fair at Shanghai's National Convention and Exhibition Center, including many robots.

These include a robot developed by the RoboWay team at Fudan University to send or receive packages.

The robot, shaped like a box, is called “lan peng you,” literally blue friend but sounds like boyfriend in Chinese. It has been tested on the university campus, running at speeds between 0.7 and 1 meter per second. It has multiple sensors for auto navigation and to avoid barriers.

By scanning the QR codes, users can place orders and the robots will pick up or deliver packages. It send messages to users five minutes before it arrives at an address.

At the Shanghai Polytechnic University booth, a system shows how robots can deal with returned products.

His team has developed the RLOM reverse logistics platform to handle the problem. It includes a flying robot to sort and rank returns and track reasons for returns. Those still valuable will be put in the warehouse and a flying robot can check inventory regularly. They will be sold online and robots will be used to take down products from high shelves according to orders, while a robotic arm can hand products to buyers accurately.

“Checking inventory is tedious and sometimes dangerous as the shelves are usually very tall and some warehouses are in high or low temperature,” said Hao. “Robots can liberate human beings from such work and every step can be traced with our computer system.”

The system is said to be helpful for companies to build greener supply chains, saving 30 to 50 percent of losses and improving profits by 5 to 8 percent.