The bonded logistics center in the Hongqiao Central Business District was launched on Wednesday as a platform offering "6 + 365 days" one-stop trading services to support the China International Import Expo, with a batch of foreign companies signing agreements to bring imported products to the center.

The day also marks the 40-day countdown to the start of the second CIIE on November 5.

The Type B Bonded Logistics Center covers an area of over 50,000 square meters, aiming to serve as a distributing center for imported commodities and to expand the spillover effect of the import expo.

Orient International Group, one of the major operators of the bonded logistics center, said it will focus on promoting the spillover effect of the CIIE, the new bonded exhibition and trade mode, and the “first store economy” (which is to attract more domestic and foreign enterprises to choose Shanghai as the site for their first stores in China), so as to develop the center as a new shopping highland for imported goods. 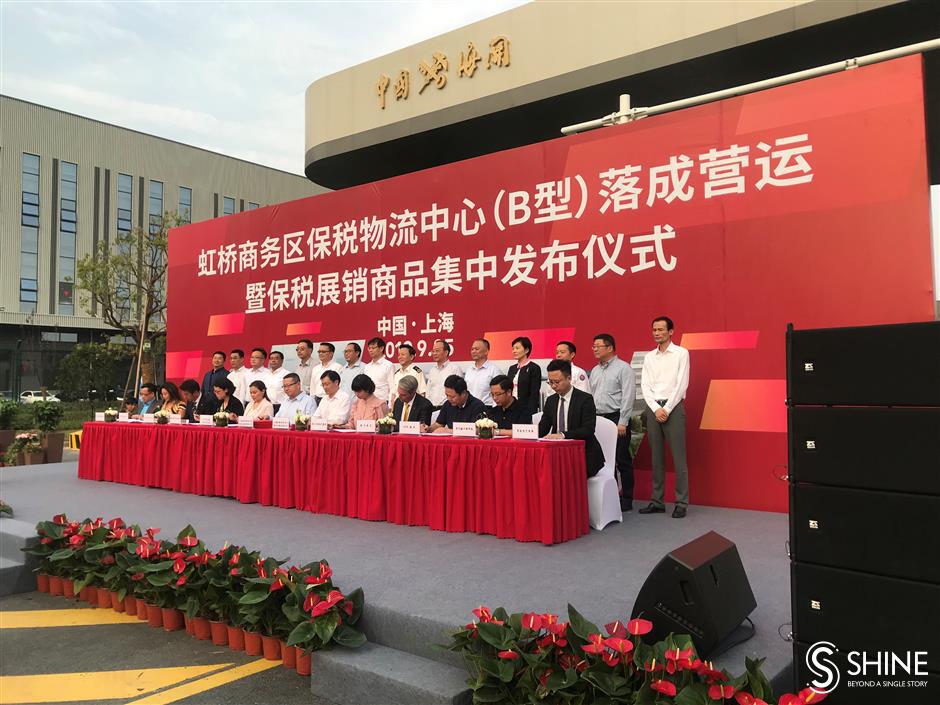 A signing ceremony after the official launch of the bonded logistics center in the Hongqiao Central Business District.

Also on Wednesday, a support event was held on the them of “expanding the spillover effect of the CIIE and promoting the integrated development of the Yangtze River Delta” at which government authorities of various Shanghai districts and some nearby cities shared the progress they’ve made and their plans for future development.

Wu Bin, deputy director of the Minhang government, said the district is the core area of Shanghai’s southern sci-tech innovation center, and has promoted 53 foreign companies in the district to register for the second CIIE as exhibitors and 64 companies will attend the expo as buyers, with an estimated over US$1 billion contribution to total turnover.

Songjiang District also emphasized the development and promotion of the G60 Sci-tech Innovation Corridor project, according to Chen Xiaojun, the district's deputy director.