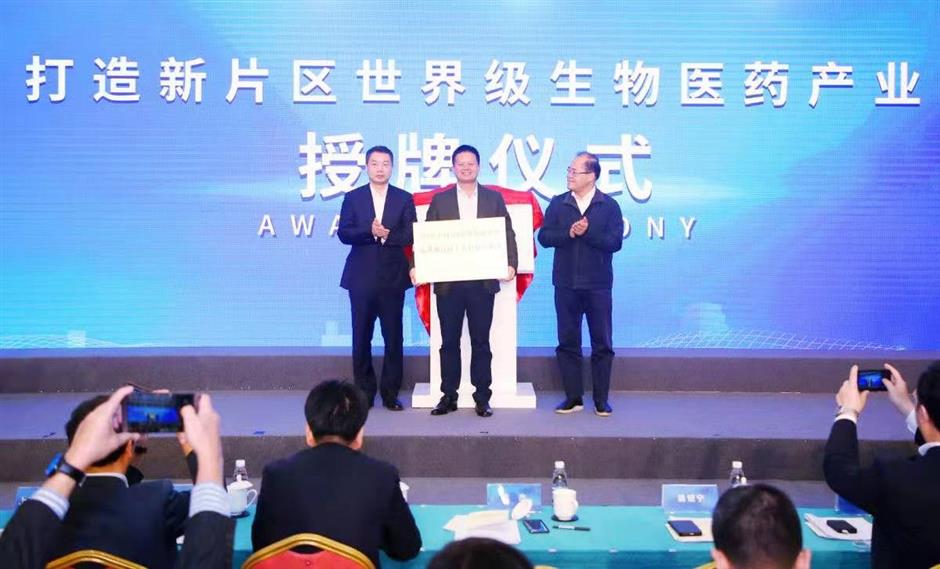 The Lingang Life Science and Technology Park is officially unveiled on Friday.

The Lingang Special Area Administrative Committee released a raft of policies on Friday to foster industrial development in the area as well as supporting measures designed to boost growth in integrated circuits, artificial intelligence, biomedicine, and aviation and aerospace.

The so-called "1+4" initiative, consisting of 56 policies —16 general and 10 each for the four key industries — were issued less than two months after the area was officially taken into the China (Shanghai) Pilot Free Trade Zone.

"A major highlight of our latest initiative is that the series of policies and measures comprise both widely applying and precisely targeting ones," said Chen Jie, the committee's deputy director. "With these policies and measures, we are committed to offering strong support to enterprises from various industries seeking development here."

The 56 policies mainly focus on improving technical innovation, integrating industries, and enhancing regional industrial strength. They will also help boost the establishment of a world-class frontier industrial cluster and accelerate the construction of an open industrial system boasting international competitiveness.

The policies are aimed at supporting the breakthrough of core technologies and products, the building and enhancement of industrial capacity, the building of independent innovation capacity as well as the fostering of an innovation-friendly industrial environment.

For the development of integrated circuit industry, 10 policies have been issued to support companies and projects involved in IC design, manufacturing, packaging and testing, equipment materials, and electronic design automation.

In artificial intelligence, the policies will mainly promote deep integration of AI technology with other industries such as integrated circuits, biomedicine, aviation and aerospace, high-end equipment manufacturing and some other emerging industries of strategic importance.

In biomedicine, the policies focus on high-end research and development, manufacturing and service, with a zoom into sectors such as biotechnology drugs, precision medicine and high-end medical equipment.

To boost growth of the aviation and aerospace industry, the policies will focus on large aircraft and engines for civil aviation use and offer support for aviation and aerospace-related institutions and organizations with domestic and international competitiveness mainly through relaxing restrictions on registered capital and investment methods.

"In general, the 56 policies announced today are designed to attract more enterprises to the Lingang Special Area, and boost their development and growth," said Gu Changshi,  the committee's chief planning officer for industrial development. "They also aim to enhance their innovation and production capabilities."

The Lingang Life Science and Technology Park, with a planned area of 4.5 square kilometers, was also unveiled on Friday. The first phase of the project, due to go into operation by the fourth quarter of this year, will comprise offices, R&D centers and production facilities for enterprises involved in biomedicine and high-end medical devices.