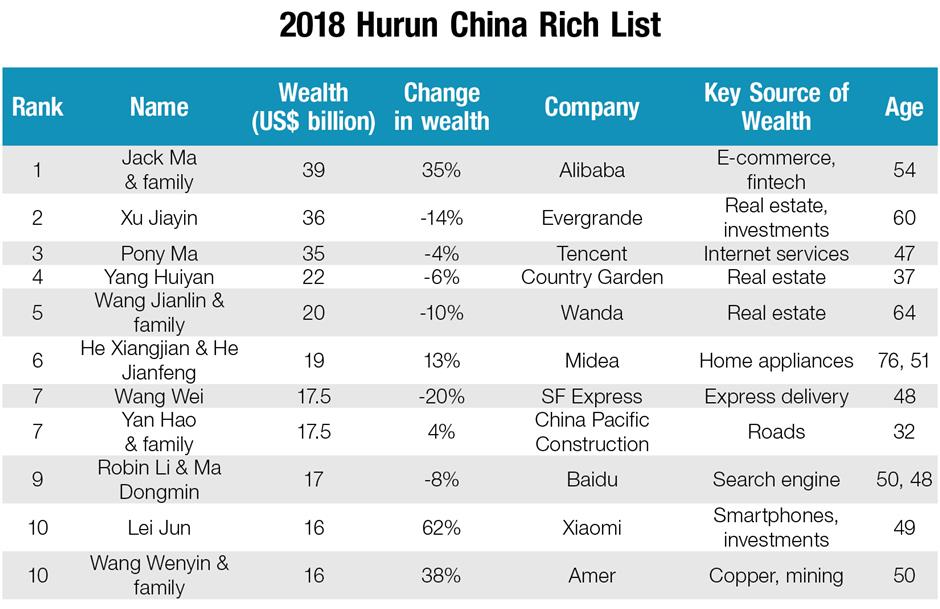 The 2018 Hurun China Rich List was released today, with Ma Yun of Alibaba becoming the richest man in China, with a fortune of US$39 billion.

"A 20 percent drop in the stock exchange, on the back of a slowing economy and the US-China trade tension, resulted in 456 drop-offs this year, the highest since records began twenty years ago," Rupert Hoogewerf, chairman and chief researcher of the Hurun Report said.

Hoogewerf highlighted the influence of the depression on the stock markets. "This year, entrepreneurs from 34 listed companies had their shares frozen," he said.

Ma Yun, 54, and his family shot back to the top of the list for the second time in four years. Ma’s wealth increased by US$10 billion to US$39 billion this year, on the back of a hike in the valuation of Alipay mothership Ant Financial.

"The 'Big Three' are pulling away from the rest," Hoogewerf said.

There were 219 new faces, led by 38-year old Colin Huang Zheng of e-commerce giant Pinduoduo, and five new faces shot straight into the Top 100. Others include ‘Battery King’ Zeng Yuqun of CATL, a battery maker for the e-car industry, and ‘Blockchain King’ Zhan Ketuan of Bitmain.

Lei Jun, of smartphone maker Xiaomi, saw his wealth shoot up the fastest at a massive 62 percent to US$16 billion, breaking him into the top 10.

Hoogewerf said, "The scalability of the market coupled with a strong investor ecosystem is creating big new businesses fast."

By industry, 60 percent of the list made their wealth from the "Big Four" industries of manufacturing, real estate, investments and Internet technology.

Manufacturing has been the main source of wealth for the past five years, although the number of individuals from this sector dropped slightly to 26.1 percent from last year’s 27.9 percent, on the back of the US-China trade war.

Real estate, which was the top wealth creator for the first 15 years of the list, came in second, edging up from 14.6 percent to 14.9 percent.

New energy, retail, food, and clothing and apparel all edged up, whilst natural resources, culture and entertainment, and agriculture edged down.

It's worth mentioning that the number of women in the list made up 28.7 percent, a record high since the list began 20 years ago. Yang Huiyan of Country Garden remained the richest female in China, with wealth totaling US$22 billion.

The list released by rich list compiler and research platform Hurun Report welcomed its 20th anniversary and was presented in association with Lexus this year.