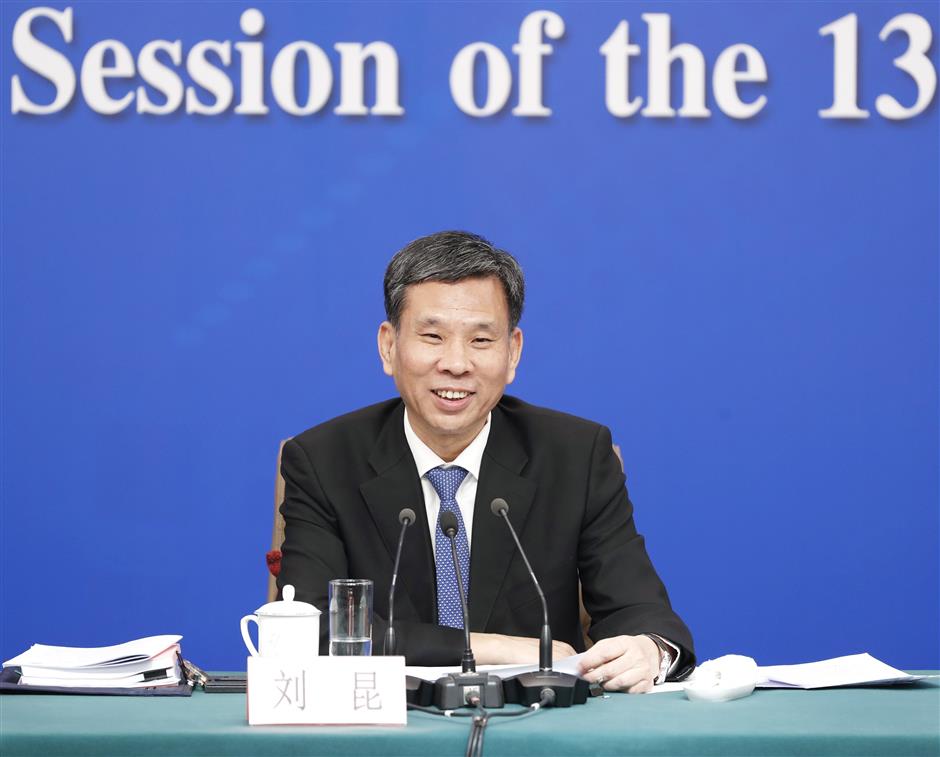 Minister of Finance Liu Kun speaks at a press conference on the sidelines of the annual legislative session in Beijing on March 7, 2019.

The Ministry of Finance said Thursday that risks of China's local government debts are controllable and measures are being taken to prevent any increase in hidden debts.

The debt balances of both China's central and local governments are within the legal limit, Minister of Finance Liu Kun told a press conference on the sidelines of the annual legislative session.

The debt balance of local governments stood at 18.39 trillion yuan (US$2.74 trillion) at the end of last year, well below the official ceiling of 21 trillion yuan, official data showed.

The local debt ratio was 76.6 percent last year, significantly lower than the international warning line of 100 percent to 120 percent, while the total government debt ratio, taking into account the debts of central government, came in at 37 percent, also far from the alert level of 60 percent set by the European Union, Liu said.

"Given the figures, the government debt risks China faces are very low," he said.

China is "very serious" about hidden debts, and prohibits the debt-raising practices of local governments that disregard solvency, Liu said.

The ministry will take a sound approach in handling existing debts, strictly prevent illegal borrowing, and ensure that no systemic risks will emerge, Liu said.

Liu said China sticks to principle that the central government will not offer bail-out and the borrower is responsible for the debt.

A market and law-based mechanism has been established to deal with debt defaults, the minister said, calling the progress in reducing existing debts positive.

The appropriate increase of the deficit-to-GDP ratio is an important decision of the Communist Party of China Central Committee and the State Council in line with economic and social development needs and sustainable fiscal development, Liu said.

The move will enhance counter-cyclical adjustment to facilitate steady and rapid economic development. It will also accommodate to tax and fee cuts in a larger scale, effectively lower the burden on enterprises and energize market entities, Liu said.

Profits turned in by designated state-owned financial institutions and enterprises directly under the central government will be increased and local governments are asked to put various funds and assets to good use through multiple avenues, expanding fiscal resources and allowing only a moderate deficit-to-GDP ratio increase, according to Liu.

The 2.6-percent target is lower than the international 3-percent deficit warning line and those of the world's major economies. The goal has factored in balance of fiscal revenue and spending and issuance of special-purpose debts and leaves room for macro regulation, Liu said.

Unlike many other countries, China's government debts are used mainly for effective investment instead of maintaining government operation and employee payment, Liu pointed out.

China's overall income of the pension funds is greater than the expenditure, and the operation of the fund is in good condition, Liu said.

"Nationwide, China can ensure that the pension is paid on time and in full," Liu said.

The cumulative balance of pension funds stood at 4.6 trillion yuan at the end of last year, he added.

In 2018, China established a system allowing the central authorities to adjust corporate pension funds at the national level, Liu said, adding that 22 provinces had benefited from the arrangement last year.

"Judging from current financial arrangements, each provincial region can achieve the balance of pension funds this year," he said.