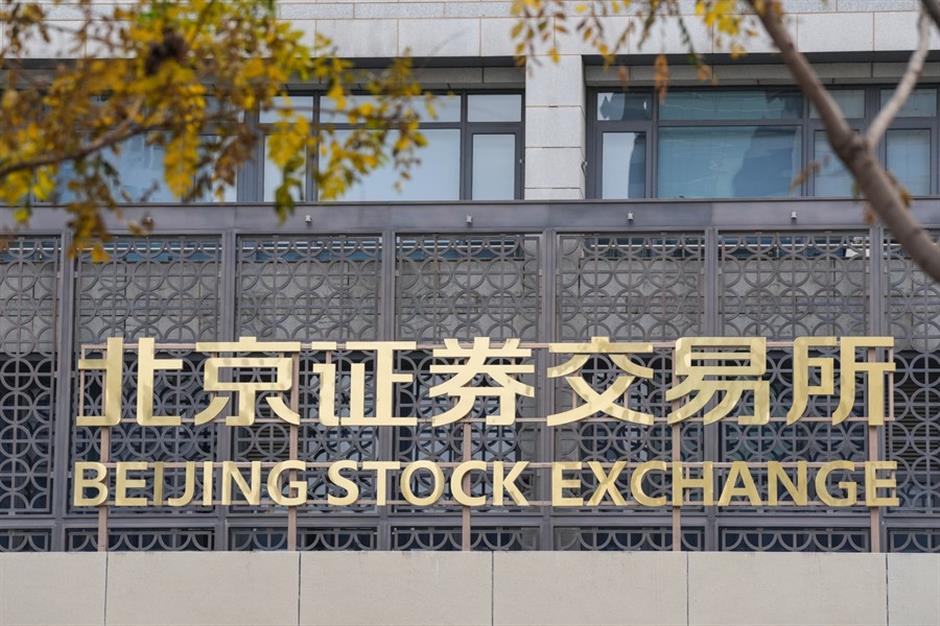 Photo taken on November 15, 2021 shows an exterior view of the office building of the Beijing Stock Exchange, in Beijing, capital of China.

As of Tuesday, 82 companies were listed on the bourse, of which 11 were newly approved and 71 were transferred from the selected tier of China's National Equities Exchange and Quotations (NEEQ), also known as the "new third board," BSE data shows.

The exchange saw a total turnover of 47.9 billion yuan (US$7.52 billion) for 82 listed stocks after its debut on November 15, when the first-day turnover hit a new high since the selected tier started trading, according to the data.

"In the first month of trading, the BSE saw an uptick in market activity and an overall stable price trend," said an official with the exchange.

As the reform started to show effect, positive changes were seen in the market, such as more enthusiastic investors and improved liquidity.

Statistics show that the exchange saw over 4.6 million new qualified accounts during the first month, 2.7 times the number before the bourse was announced.

"Investors have tended to be rational, and the overall transaction enthusiasm remains reasonable," said the BSE official, adding that the bourse, together with NEEQ innovation and basic tiers, will continue to create opportunities for investors to share the development dividend of innovative SMEs.

It adopts the registration-based initial public offering system, in line with the Nasdaq-style sci-tech innovation board, also known as the STAR market, on the Shanghai Stock Exchange, and the tech-heavy ChiNext market on the Shenzhen Stock Exchange.

More SMEs have seen the possibility and opportunity of listing after the BSE debut, while listed companies are showing stronger will and taking faster steps to be listed on the Beijing bourse.

As of Tuesday, there were more than 1,200 listed companies that met the financial conditions of the BSE, with an average net profit of 36.66 million yuan. Many of them have entered the application process, or are preparing to go public.

Some 57 enterprises, mostly concentrated in high-tech emerging industries and featuring high R&D intensity, outstanding growth and high profitability, were under review by the exchange as of December 10.

"The importance of BSE is beyond doubt," said Liu Jie, fund manager and deputy director of Harvest Fund Research. "In the future, more high-quality enterprises will choose to be listed here, forming a positive cycle of exchanges, listed companies and investors."