But Apple’s rebound may be “short-lived” in the fourth quarter as competition heats up, according to analysts.

China’s smartphone sales totaled 119 million units in the third quarter, down 5 percent. Huawei, Oppo and Vivo were top three vendors in China, followed by Xiaomi and Apple, according to Canalys.

Apple’s declining streak in China, however, has come to an end as sales soared 40 percent from 8 million units a year ago to about 11 million units in the third quarter — Apple’s best performance in China in the last eight quarters.

“Apple’s growth this quarter is only temporary. The high sales cater to pent-up demand of iPhone upgraders, said Jia Mo, Canalys' research analyst. "Price cuts on earlier models following the release of the iPhone 8 have also helped. However, Apple is unlikely to sustain this growth in Q4.”

The top Chinese brands have launched or announced the launch of flagship models, such as Huawei’s Mate 10 released two weeks ago and Oppo’s R11s that will debut on Thursday. 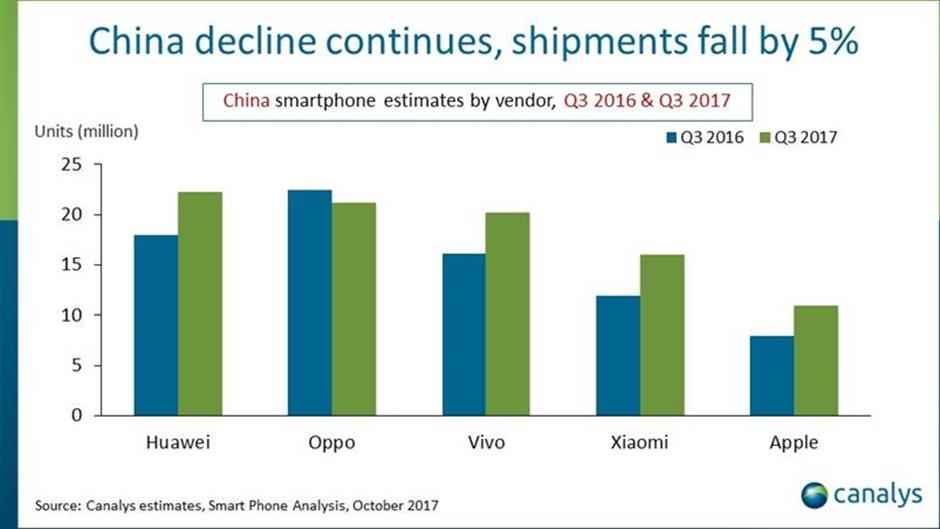 China's smartphone growth in the third quarter, according to Canalys