The shares in the world’s fourth-largest smartphone maker recovered somewhat, closing at HK$16.8, a 1.2 percent discount to its offer price of HK$17.

The issue, once ballyhooed as the biggest in the world this year, was scaled back to its lowest price range. Among the setbacks confronting the offer were concerns about mounting China-US trade tensions that have roiled the technology sector, and the company’s backdown from earlier plans to issue Chinese depositary receipts.

“It’s a new start for Xiaomi after an IPO for more innovation and global expansion,” he said at the Hong Kong Exchange and Clearings, adding that “it’s a tough timing for an IPO.”

One factor in Xiaomi’s disappointing debut may hinge on how investors view the company’s business.

Some investors think Xiaomi is not an Internet company but “a purely consumer firm with the genes of technology,” according to Sinolink Securities in a research note.

The Chinese market is a “cashcow” of Xiaomi but the whole market is “shrinking.” That is the reason why xiaomi has to get listed now for capital on research and overseas expansion despite the bad timing, said Jia Mo, an analyst of Canalys.

Meanwhile, Xiaomi internet services like reading and game are not competitve compared with tier-one players like Tencent in China, industry insiders said.

Xiaomi is sometimes called the “Apple of China.” Its products include smartphones, TVs, routers and other smart devices. The company reported a two-thirds surge in revenue last year to 114.6 billion yuan (US$17.25 billion). A third of that income comes from global sales, Lei wrote earlier in a public letter.

The company is the first in Hong Kong to sell shares with a dual-class structure since the city changed listing rules to allow company founders to keep outsized voting rights.

Businesses in the “new economy” will continue to boost IPO activities on both the mainland and in Hong Kong in the second half, EY predicted in a report in June. 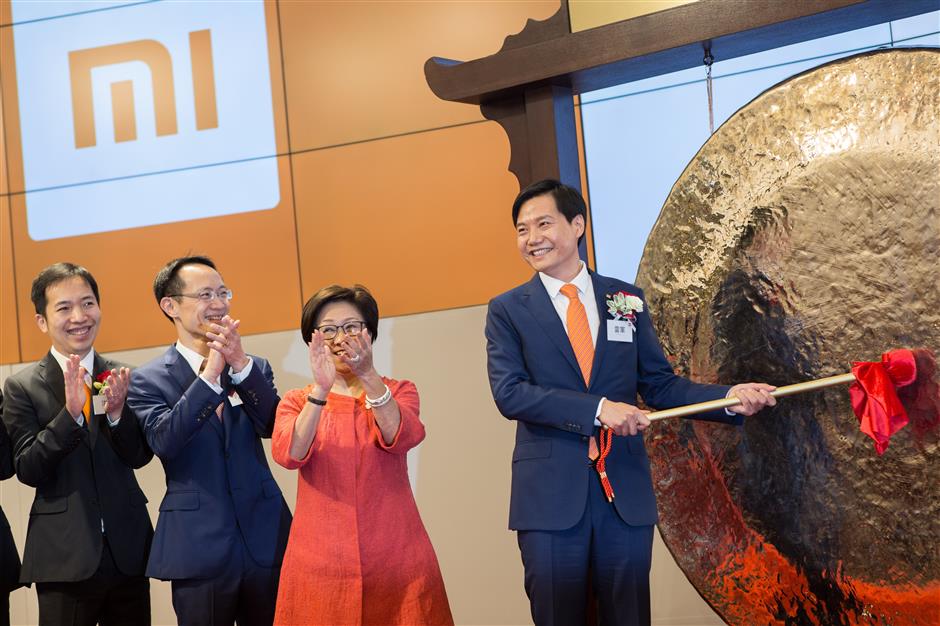 When Xiaomi priced its IPO at the bottom end of a range between HK$17 and HK$22, it effectively reduced its valuation to about US$54 billion — roughly half of the initial goal set by the company. The deflated issue now ranks as the second biggest in the world this year.

Some institutional investors saw bids as low as HK$15.20 in gray-market trading ahead of the formal start of trading, 11 percent below the IPO price, according to a Bloomberg report.

Shanghai’s stock index is down almost 20 percent so far this year, while Hong Kong’s Hang Seng Index has dropped about 5 percent.

Analysts cite the mounting trade dispute between China and the US, which has been especially heated in the technology sector.

Xiaomi was among the first companies to submit an application to issue the depositary receipts when China issued rules for a pilot program in the new market in June as part of plans to encourage the domestic listing of innovative companies.

Xiaomi’s sprawling businesses, which include artificial intelligence speakers, air purifiers and wristband, still depend on smartphones for 80 percent of revenue.

Then Xiaomi gradually expanded into other smart devices and opened off-line stores nationwide.

It also moved aggressively into India where its phones have become popular sellers.

Lei insisted that Xiaomi had evolved beyond just smartphones into a maker of intelligent and Internet of Things devices. He said the company had limited the margin of hardware products to 5 percent

Xiaomi’s road toward IPO in HK

2011 Debut of its first smartphone which is sold only online

2013 Debut of Xiaomi’s entry-product line RedMi with price below 1,000 yuan

2015 Release of the second-generation TV products starting from 1,999 yuan

2017 Release of its Mi 5C that uses a self-developed processor; Xiaomi becomes the top smartphone player in India