Changing rules of the game in health care 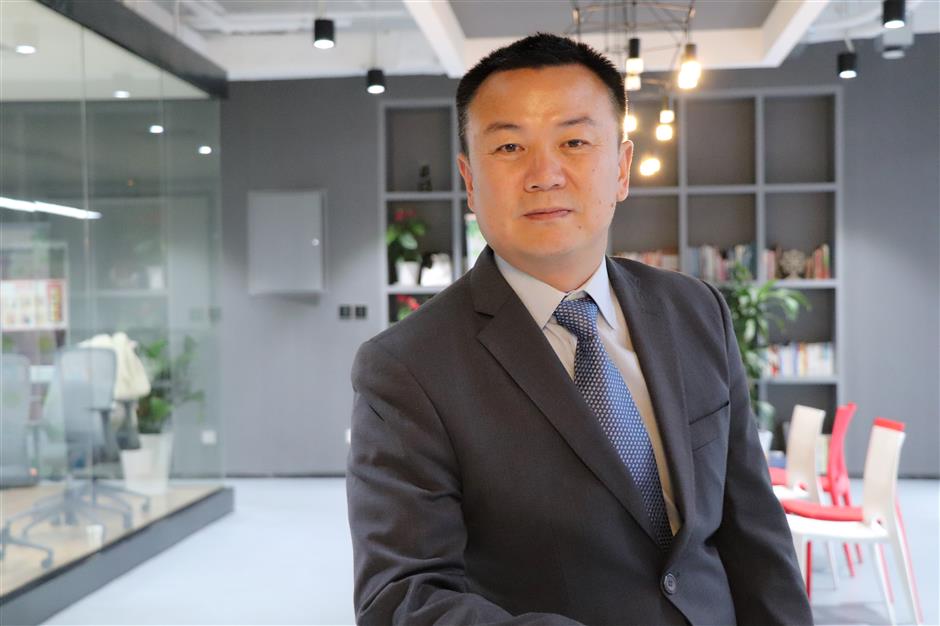 "They (other players on the market) sell hardware, I sell services."— Zhu Jiping, founder and chief executive of LIF

The relentless urban rat race means that a large number of overworked city dwellers are battling health issues. Some may even be at risk of karoshi, or death caused by overwork, without even knowing it.

A host of intelligent wearable devices has sprung up in the form of wristbands and smart watches. With functions like monitoring heartbeat and calculating paces, they are proving to be a hit with joggers and health-conscious yuppies.

Zhu Jiping, founder and chief executive of LIF, a company based in Zhangjiang High-Tech Park, is one of the many who are taking advantage of the burgeoning market.

Founded in 2010, LIF started out making wristbands and watches, gradually diversifying its product line to include a pendant and a clip-on that can be attached to a belt or suit lapel.

Zhu, 53, a US-educated engineer and former Wall Street investor, proudly told Shanghai Daily at the 2018 China International Industry Fair that ended on Sunday that even the earliest LIF products were “superior to the latest models from tech giants like Apple and Xiaomi.”

His confidence is not just idle boasting. LIF products are designed to respond immediately to life-threatening situations, like when the user has a stroke or is immobilized after a stumble.

Apple’s latest gadgets require users themselves to decide if their conditions are “critical” enough to warrant immediate medical attention and a call for an ambulance. By comparison, Zhu said equivalent products from LIF are capable of sending out an SOS and arranging for emergency rescue based on automatic analysis of specific vital signs.

“If the user passes out, a manual help-seeking function is meaningless,” said Zhu.

Technologies such as geofencing, which is often applied to stem the random and illegal parking of shared bikes, have also been incorporated into LIF products to set up a perimeter for users with Alzheimer’s or dementia.

Their custodians or caregivers will be alerted at once if the patients, limited to moving within a certain radius of homes or hospitals, stray from the designated “geofenced” area.

Following a series of upgrades, LIF products have expanded the scope of health indicators to be monitored, from heartbeat, length of sleep and skin temperature to electrocardio signals and ambulatory blood pressure.

At the recent fair in Shanghai, hype quickly began to build around LIF products equipped with the latest 3D positioning technology. Traditional two dimensional positioning used in car navigation is unable to locate a person or object in vertical terms. “Whether he is on the elevated highway or on the ground, you cannot tell,” said Zhu.

But 3D positioning can immediately reveal the position of a person in need of help, while drastically reducing the margin of error to dozens of centimeters.

In Zhu’s words, knowing exactly which floor of a building the patient is on is critical, saving a “tremendous amount of time in getting to and rescuing him.”

All these technological superiorities combine to offer Zhu’s company unique leverage in the US market, where it made its debut in 2014.

The company has established a client base of over 30,000 and joined forces with a dozen partners to help distribute its products in the US.

But the ambitions of this entrepreneurship won’t stop at manufacturing. Instead, Zhu has set his sights on the goal of building a “closed loop” health monitoring and pre-warning system.

The biggest failings in Xiaomi and Apple wearables, he said, are that they provide only numbers, leaving users to scratch their heads. Seldom do big tech firms follow up with valuable health advice or action.

“What’s the point of giving users information they can barely make sense of?” he asked. “What do changes in their pulse rate or blood pressure tell them about their health? It’s your job to tell them.”

To change what he sees as a lack of post-sale services in the wearables market, Zhu and his co-workers at LIF collaborated with American doctors and therapists several years ago, culling data from a wealth of clinical studies.

The system proceeds to take precautionary measures accordingly, from dispensing advice on a healthy lifestyle to contacting doctors to intervene — before it’s too late.

For example, a person considered “sub-healthy” will receive notices suggesting, say, to take more vitamins or get more sleep. Symptoms indicative of potentially fatal conditions will lead to emergency calls to doctors or medical institutions in partnership with LIF to provide help.

That’s what sets his business apart from the rest of players in the market, big or small.

LIF has woven together a health service network comprising hospitals, nursing homes, social rescue bodies and volunteer groups in the US. In addition, it also operates a call center dealing with emergency SOS requests sent from its products and passes them on to the nearest rescuers on the ground.

Zhu recalled a conversation with a grateful user who became aware of his potentially fatal sleep apnea syndrome only after being alerted by the LIF pendant he wore. “Customer testimonials like these gave us confidence,” said Zhu, who said his company views itself as “guardian of health.” 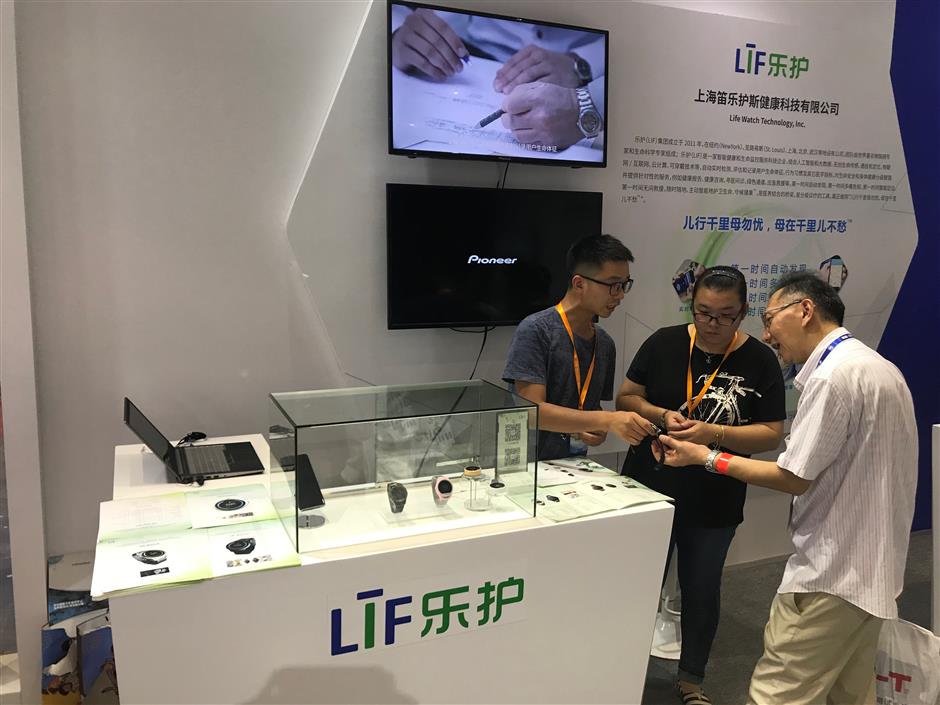 Staff from LIF show a visitor how to use their intelligent wearable devices at the 2018 China International Industry Fair in Shanghai, which closed on Sunday. — Photos courtesy of LIF

That vision took shape because of two tragic deaths in 2010.

In the first, Zhu had an appointment with a body-building friend in Beijing, only to be told that he had died of a heart attack the previous night at age 36. Still grief-stricken, Zhu learned in December that an investor friend from Hangzhou died in his sleep after a dinner party in Shanghai. He was only 29.

These two incidents prompted him to rethink his career as an investor and motivated his career switch to the smart health industry.

Such a switch might appear difficult, but for Zhu, there is an element of consistency in what he once did and what he is doing now. Back in the States, he was a celebrated engineer responsible for research on ABS, or antilock brake systems designed for vehicle driving safety.

“My previous role was to guarantee the safety of motorists and passengers” he told Shanghai Daily. “Now it’s to safeguard the health of people.”

The reason he tested his entrepreneurial idea first in the US had to do with a demographic trend. The US population aged rapidly in the 1980s, giving rise to a senior care industry and growing demand for related products.

The other two obvious explanations for LIF’s US debut are relative familiarity with the market there as well as the knowledge that what works in the US — a more mature and thus “difficult” market — tends to be applicable elsewhere.

Zhu said he is gearing up for an entry into the China market later this year. It has been delayed. in large part, to a shortage of production capacity.

He plans to adopt a twopronged strategy in China: partnership with hospitals and other institutional players on the one hand, and online and offline retail sales on the other.

Zhu noted an interesting finding reported by his American partners, indicating that at least half of the SOS requests they handled came from the elderly, not because they were necessarily ill, but often because they lived alone and yearned to talk to someone.

Zhu drew an important business lesson from that finding.

“Our services must be adequately customized to cope with the varied needs of clients, in China as well as in the US,” he said.

In tapping the China market, the entrepreneur is hatching plans to not just “be there,” like many other foreign players. Rather, his stated aim is to create a lot of noise by changing the rules of game in the segment of senior care insurance products, but he didn’t disclose details.

In the long run, the company’s mission is to further enrich the variety of its products by rolling out more ubiquitous wearable items like socks, shoes and clothing. Talks are already ongoing with a renowned Italian haute couture brand.

When will all this likely happen?

“I don’t know,” Zhu said, with a sly smile, “but our current pursuit is to monitor health every step of the way.” 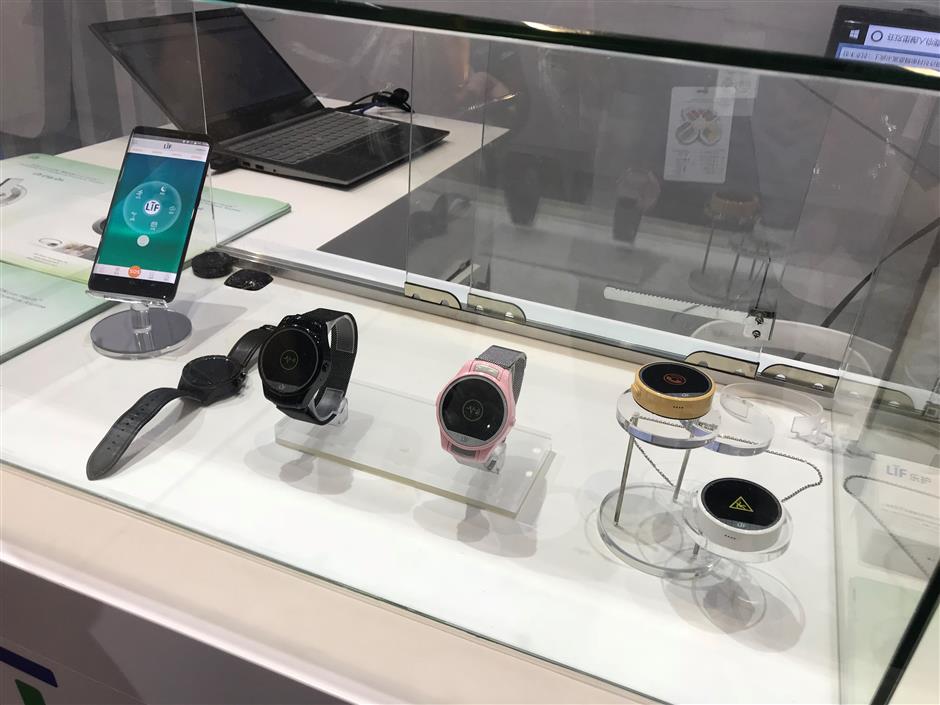