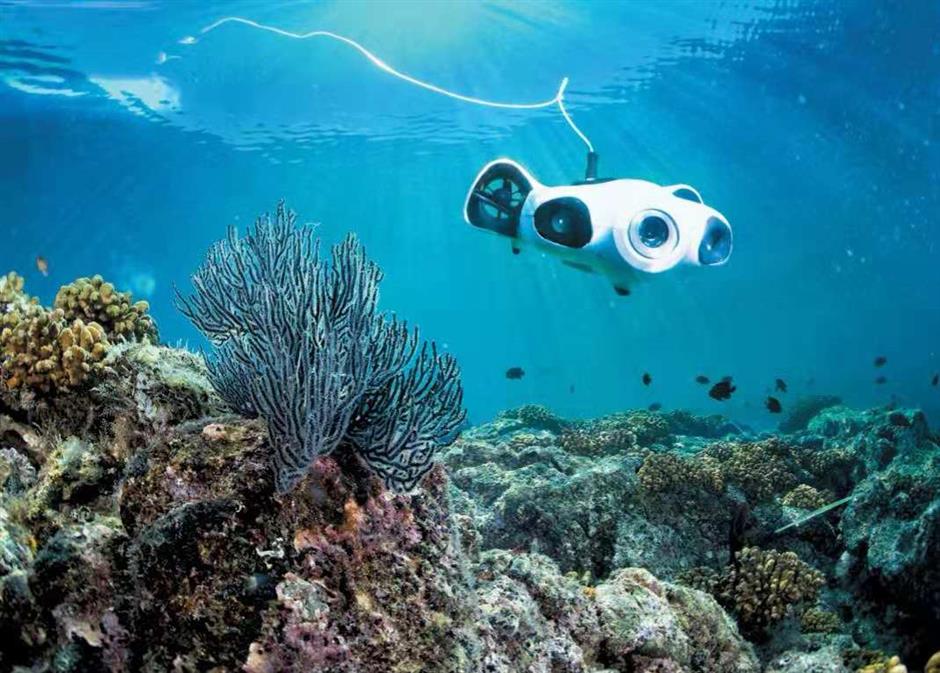 Robots from Youcan, a leading Shanghai-based manufacturer of smart underwater drones, have sparked a range of interest in exploring the sea and further opend our eyes to the splendid undersea world. 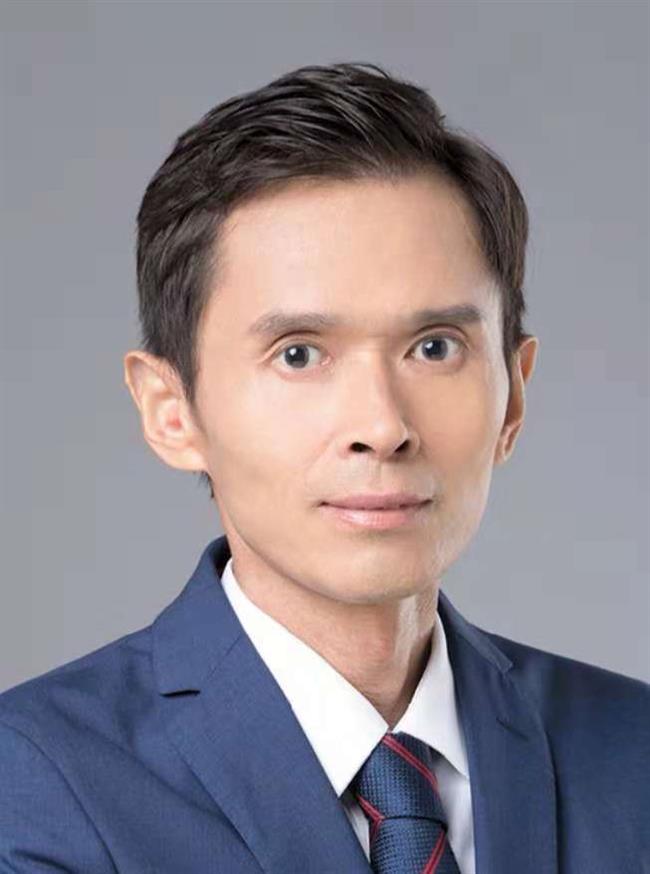 Commercial drones have shown that the sky is no longer the limit. Among the many candidates with the potential of repeating the success of drones in consumer technology are underwater robots.

Snow Lee, 44, is a pioneer in this fledgling industry. Youcan Robotics, a start-up company he founded in Shanghai's Lingang Area in 2016, is a leading manufacturer of consumer underwater robots with tracking and navigation capabilities.

Its products proved to be a big hit when Lee began selling them to North American and European markets. Consumers there stand along a shoreline and use a remote to control the robot's movement in the water. They can send image and video back in real time to be viewed on an iPad-sized screen without getting wet.

Lee hatched the idea of a robotics company in 2016, when he took two products to a consumer electronics trade fair. The automated guided vehicle displayed at his booth drew cold shoulders, but the prototype of what was to become the first-generation Youcan product was wildly popular among visitors.

It was an epiphany for Lee, who then decided that underwater robots were the future and that's where he needed to put his focus.

Lee was also mindful of the big picture when making this decision. In 2016, the commercial drone market was starting to show signs of a bubble, and Shenzhen-based DJI's domination of the market “at home and abroad” threatened to edge out lesser players.

"The technology is there, the supply chain is mature, so it makes no sense to manufacture homogenous products," Lee observed.

By contrast, underwater robots, especially those built for recreational purposes, represented a "blue-sea market." Pioneers like Lee describe themselves as "trailblazers" because this is a frontier riddled with technical difficulties.

Compared with drones, underwater robotics face a far more complex working environment, such as water pressure, currents, seawater's corrosive effects and obstacles like coral reefs or caves. All this means that Lee's product developers have had to bring in experts with backgrounds in, say, hydromechanics and water-proof materials science.

A bigger problem is the supply chain. Unlike drone companies, which have an army of suppliers to provide parts, central functions of underwater robots, like image transmission modules, essentially had to be invented.

"So, we literally built the company from the ground up, with no past experience to rely on," Lee told Shanghai Daily.

With more than 20 years of experience in semiconductor and video-processing businesses, this engineer-turned-entrepreneur was unfazed.

He still recalls the thrilling moment the first Youcan product, which came out of a 3D printer, hit the water in Dishui Lake and sank to a depth of one meter.

"But it stopped there and didn't go deeper,” Lee said, with a laugh. Luckily, it moved in the water and sent back an image."

Despite problems with a leaking hull and blurry images, the prototype gave Lee the confidence to go further. Over the next two years, he went on to develop five generations of Youcan products. The newest is a model called BW Space.

It can sink up to 100 meters under the sea and automatically follow a moving object when so programmed.

As Lee sees it, demand for auto-piloting underwater robots is strongest in countries where yachting and scuba diving are part of the lifestyle. Diving clubs and yacht owners from North America account for more than half of Youcan's customers. The rest of the orders come from Australia, Europe, Japan, South Korea and a few Southeast Asian countries.

"Their numbers grew rapidly," Lee said of his clientele.

In cities with famous beaches, like Sydney or Miami, there is an obsession about using the latest high-tech gadgets to explore the sea.

Constantly travelling around the world to connect with buyers and partners, Lee said he is often moved by effusive comments from users. He once came across a buyer who volunteered to write several pages of test reviews without seeking any remuneration. That input was later incorporated into the upgrading of a product.

Lee said he is deeply grateful for customers’support and wants to involve them in product design and upgrading. It's a way of repaying their trust and also maintaining user "stickiness." 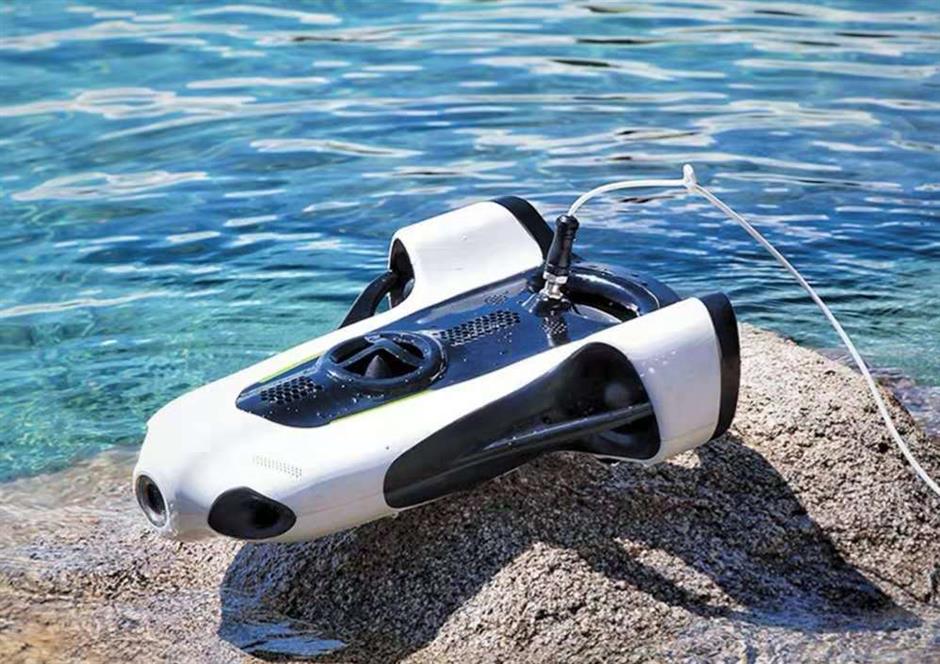 With a size of 52 long, 39 wide and 14 centimeters high, this BW Space drone has the auto-piloting technologies that enable it to sink up to 100 meters under the sea and send back image and video.

Normally priced within a range of US$1,649 to US$1,949, Youcan products are now sold via direct online sales platforms like Amazon and Global Source and also crowd-funding websites like Indiegogo and Kickstarter. The company's official online store is scheduled to launch in November. Lee predicts that this year's sales could reach several thousands of units.

In a departure from the business logic of some Chinese firms who test their products first in mature overseas markets, Lee said his globalized strategy was necessitated by market conditions.

Indeed, survival is high on the agenda of a start-up company like his. Still, he admits the vast buying power of Chinese consumers will one day lure Youcan's focus back to its home market. No timeframe is given. "It depends on customer awareness and education," he said.

Mankind's exploration of the sea was given huge impetus by the legendary French adventurer and conservationist Jacque Cousteau (1910-1997), who helped invent the aqua lung in 1943 and brought the underwater world to public view through his popular documentary series.

Lee said he hoped Youcan's robots can insulate man from risks that come with underwater adventure.

In his opinion, there is big money to be made if robots can be used to generate content for mass entertainment.

Whether that can truly happen is down to the ingenuity of consumers in finding new, sometimes mind-blowing, ways to use the products. DJI drones are evidence that such ingenuity is never in short supply.

Lee said he believes this is quietly becoming a reality with underwater robots, too. The best user scenario, he figures, lies in the live-streaming industry.

Earlier this year, the manager of a Shanghai-based underwater hockey club approached Lee, asking for substitutes to unreliable handheld camera to film games in a swimming pool. Lee's robots came up trumps and aced the job.

That was a huge inspiration for Lee, who has since begun building a multimedia ecosystem based on an app developed for his photo- and video-taking robots.

"People are happy to show off their works in groups, now in the form of aerial photography," said Lee. "In the future, it will be pictures taken underwater.?

To fully embrace this new business frontier, Lee has complemented the engineering know-how of his team with a handful of new hires with backgrounds in user-interface design and broadcast media.

Ideally, when Youcan grabs enough market share – it already sits among the top three players in the market – new business models will be formulated to cash in on opportunities from live-streaming, photographic contests and other activities.

Constraints, like China's often unclean waterways, don't seem to deter him. Youcan robots are fitted with a self-adjusting lighting system to navigate waters with low visibility.

His faith in his products was put to a major test when a Shanghai-based public construction company was looking for a supplier of advanced underwater positioning technology to help collect data for building a bridge near the city's Yangshan Deep-Water Port.

According to Lee, the procurement manager was deeply impressed by Youcan robots that not only relayed positioning information, but also detected and bypassed obstacles – a feat that even labs from top-notch universities like Tsinghua failed to pull off.

Youcan is now in talks with the Shanghai consortium to sign a contract. "We are the first in the world to be able to bypass obstacles," Lee proudly claimed to Shanghai Daily.

The intrepid entrepreneur's next goal is to add functions to his models so that they can be applied to more diverse situations, such as prospecting for oil reserves and identifying locations of victims awaiting rescue.

The latter is particularly relevant in view of Tesla founder Elon Musk's offer for his underwater robots to be used to free members of a Thai youth football team trapped in a cave in June.

Nationwide, Youcan is competing with dozens of companies, mostly startups in Shenzhen, dubbed "China's Silicon Valley," and in Beijing and Tianjin.

Cutthroat competition in the saturated drone market has taken its toll, forcing many loss-making manufacturers to be shuttered. Some might be tempted to transition into commercial underwater robotics.

"As with drones, it is 'the survival of the fittest' for underwater robotics," Lee said, adding that Youcan enjoys a head start in the race.

To make sure products coming off his assembly line can satisfy the most discerning customers, the savvy Shandong native has gone from outsourcing production to building a plant of his own in an industrial park in Pinghu, Zhejiang Province.

Once completed, the plant will also serve as an underwater lab and intelligent global logistics center.

Youcan's flagship model, the BW Space, comprises 1,000-plus components and scores of modules. Almost 90 percent of the chips inside are now sourced from domestic suppliers rather than imports.

Although chips are now considered the Achilles heel of "Made in China 2025" – the country's strategic plan to develop homegrown technology powerhouses – Lee takes an optimistic view of the situation.

He cites Japan as an example. Twenty years ago, Japanese consumer electronics were well ahead of Chinese equivalents, but the tables have been turned by a legion of fast-growing artificial intelligence companies in China.

This is evident in service robotics, an industry where Japan is arguably a world leader. Japan may still surpass other nations in new materials and optical devices, but these things are becoming less important by the day, with machine-learning dominating much of the talk at the moment. This is the area where the Chinese are catching up fast, and even countervailing, to some extent, US leadership in the realm. "At the end of the day, what matters most is the algorithms to power the chips, not some lens," Lee said.

Since more than half of Youcan robots are shipped to North America, the escalating China-US trade tensions would seem to pose a risk to the company's revenues. But Lee is undaunted.

Even if the Trump administration hikes the tariffs on Chinese imports to a whopping 60 percent or higher, he said he can cope by shifting sales to other locations.

He added that the upward pressure on Youcan's retail prices is manageable if the company maintains the high integrity of its products.

"Consumers are not so much price-sensitive as they are quality-conscious," he argues.

Ever the visionary, Lee see a future where fancy robotics will have a real impact on the human lifestyle, just as the aqua lung of Jacques Cousteau did half a century ago. 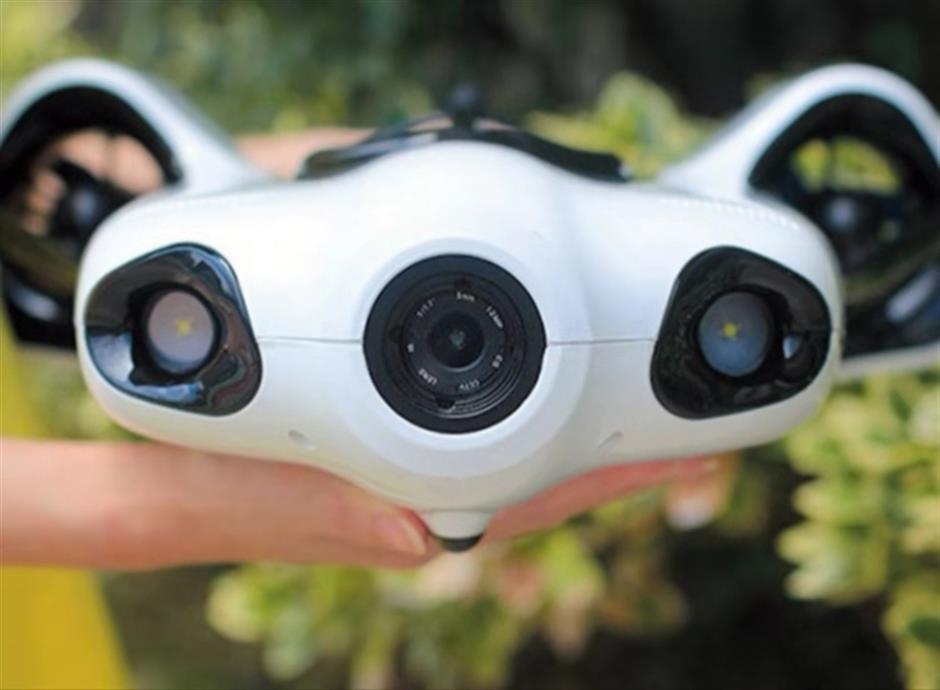 The front of the Youcan BW Space model that can not only track objects, but also bypass obstacles.