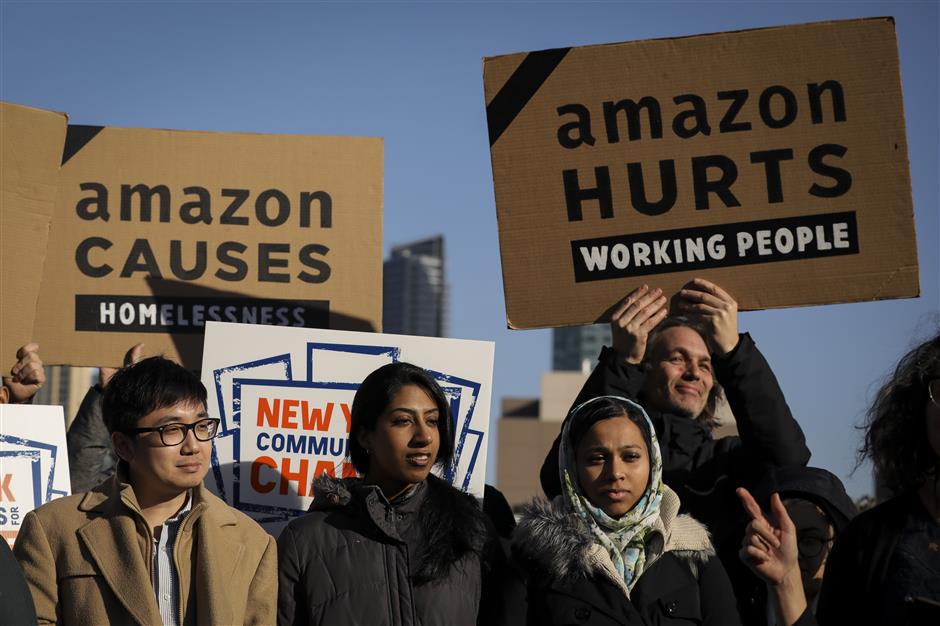 Activists and community members who opposed Amazon's plan to move into Queens rally in celebration of Amazon's decision to pull out of the deal, in the Long Island City neighborhood, February 14, 2019, in the Queens borough of New York City.

Amazon abandoned plans for a new headquarters in New York City on Thursday, blaming opposition from community leaders angry at the huge subsidies being offered to one of the world's most successful companies.

The New York neighborhood of Long Island City was one of two locations Amazon selected last year after a long search for a second headquarters or "HQ2."

The online retail giant had promised the sprawling complex in the borough of Queens would create 25,000 jobs in exchange for nearly US$3 billion in state and city incentives — which had riled some New Yorkers.

"While polls show that 70 percent of New Yorkers support our plans and investment, a number of state and local politicians have made it clear that they oppose our presence and will not work with us to build the type of relationships that are required to go forward with the project," Amazon said in a statement.

"We are disappointed to have reached this conclusion — we love New York, its incomparable dynamism, people, and culture — and particularly the community of Long Island City, where we have gotten to know so many optimistic, forward-leaning community leaders, small business owners, and residents."

Amazon, which is also in cloud computing, streaming media and artificial intelligence, chose the site after a lengthy search, saying it was outgrowing its home in Seattle, Washington.

The company said it would "continue growing" its 5,000-strong workforce in New York.

It added that it would not reopen the bidding process but would "proceed as planned" with a site in northern Virginia and a logistics center in Nashville, Tennessee.

The New York plan had been endorsed by Mayor Bill De Blasio and Governor Andrew Cuomo, but ran into fierce opposition from some local politicians and community activists, including newly elected Democratic Representative Alexandria Ocasio-Cortez, whose district borders the New York site.

"Anything is possible: today was the day a group of dedicated, everyday New Yorkers & their neighbors defeated Amazon's corporate greed, its worker exploitation, and the power of the richest man in the world," she tweeted.

De Blasio sounded bitter about the reversal of a deal clinched after months of negotiations.

"We gave Amazon the opportunity to be a good neighbor and do business in the greatest city in the world. Instead of working with the community, Amazon threw away that opportunity," the mayor said in a statement.

"If Amazon can't recognize what that's worth, its competitors will."

Cuomo meanwhile lamented that "a small group politicians put their own narrow political interests above their community" to pressure Amazon to withdraw.

He said the state Senate, which appointed an Amazon opponent to a key board, "has done tremendous damage" and "should be held accountable for this lost economic opportunity."

Conservative and liberal opponents have argued that the company led by Jeff Bezos, who tops the Forbes rich list with a personal wealth of US$134 billion, does not need what some describe as "corporate welfare."

"I'm relieved because I'm a renter here," said one female resident of the Queens neighborhood who declined to give her name. "I'm not sure these jobs would have been what the people living in this community need."

But others like David Katzen, who owns a construction company in the neighborhood but does not live there, were disappointed.

"It was a horrible decision by the local legislators to oppose it," he told AFP. "It was short-sighted and ultimately what's going to happen here? Nothing. There's no good that came of this."

George Miranda, who leads the local branch of the blue-collar Teamsters union, said after the announcement: "New Yorkers made it clear that Amazon wasn't welcome in our city if it would not respect our workers and our communities. Apparently, the company decided that was too much to ask."

Scott Galloway, a New York University professor and author, said on Twitter after the announcement: "Immunities kick in and NYC finds its testicles. This is good for NYC, and America. Billionaires should not have their hand(s) out."