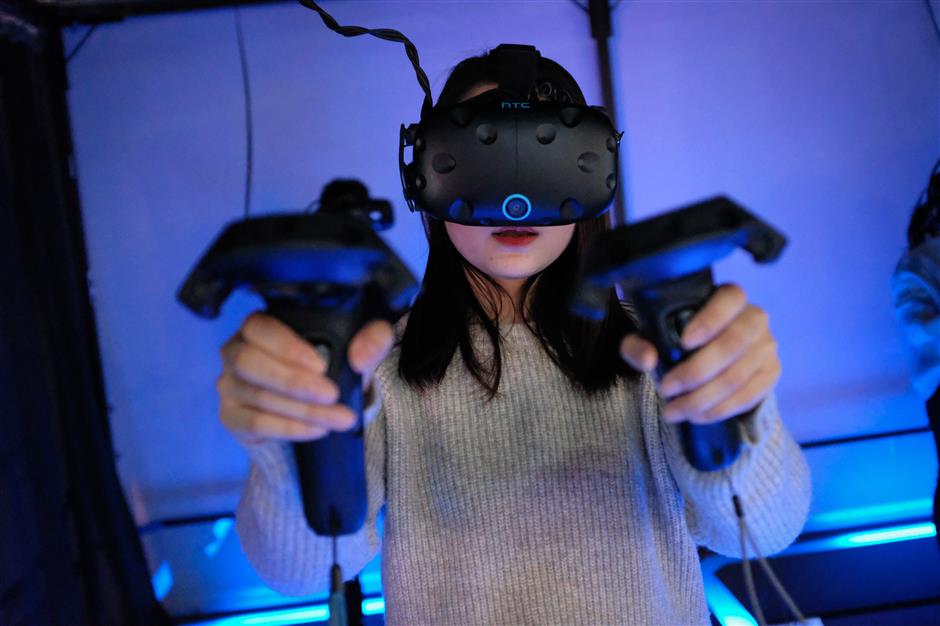 A woman plays a video game using a virtual reality headset at an arcade in Shanghai. China’s VR market is expected to grow 13-fold in 2016-2021 to US$782 million, a joint report by iResearch Consulting Group and Greenlight Insights says.

Chen Jiuxiao puts on virtual reality goggles and is immediately transported to a snow-covered ski slope, down which she slaloms without ever leaving Shanghai.

“I felt weightless skiing down the mountain,” Chen, 25, gushed after re-emerging in the material world.

“The scenery around me was so authentic.”

Chen, a hospitality worker, said she ventured into one of Shanghai’s VR arcades due to word of mouth from her tech-savvy friends.

China had an estimated 3,000 VR arcades in 2016, and the market was forecast to grow 13-fold between then and 2021 to about 5.25 billion yuan (US$782 million), according to a joint report by iResearch Consulting Group and Greenlight Insights.

Add in the profits to be made from headsets, equipment, games and other products, and it’s little wonder that augmented reality and virtual reality industries are excited about China.

“Chinese growth in the next five years could see it dominate AR/VR long-term — and not by a small margin,” Silicon Valley consultancy Digi-Capital said in a report last year.

“China has the potential to take more than US$1 of every US$5 spent” in the industry globally by 2022.

One key factor is China’s government.

Tens of millions of Chinese have become obsessive players of mobile video games, causing concern that China was raising a generation of myopic youngsters addicted to battle games.

Authorities imposed curbs last year on the number of new game releases and playing time for youths, rattling the industry and shaving billions off the market value of big players including gaming giant Tencent.

But the government is pushing hard for China to become a world leader in next-generation technologies including artificial intelligence and autonomous vehicles. VR has been lumped into that favored class, benefitting from a slew of preferential policies.

He cites the relatively high cost of arcade play up to 70 yuan or more for a 15-minute game — and of setting up home systems.

“It’s hard for minors to get addicted,” he said.

The nascent VR games industry suffers from a shortage of high-quality games, however. At Shanghai’s VR+ Amusement Park, a new game lands only once every three months, officials there said.

Firms such as Tencent remain hesitant to dive into the arcade scene until the sector reaches critical mass, analysts say.

But the company, along with fellow Chinese giants Alibaba and Baidu, is investing in virtual online shopping and VR entertainment, all of which could trickle down into gaming.

Already several towns and cities in China have declared themselves incubator zones that are integrating VR into research, manufacturing, education and other spheres, luring in capital.

Seekers VR, based in the city of Wenzhou in Zhejiang Province with a franchised chain of 200 arcades in more than 70 cities across China, is working with the Wenzhou government to establish a college focused on educating students about VR and using the technology in lessons.

“There is no dominant competitor in the VR industry since it is so immature, and we will bring more and more opportunities,” said Seekers VR’s CEO Belle Chen.

The wide-scale adoption in China of ultra-fast 5G networks is expected to further boost VR development, and foster growth in areas such as education and training, said the Shanghai arcade Machouse’s manager Chen Wei.

“There is no better way to learn skills, and at a lower cost, than VR. Even though VR is still educating users about what it is, it could explode someday,” he said.