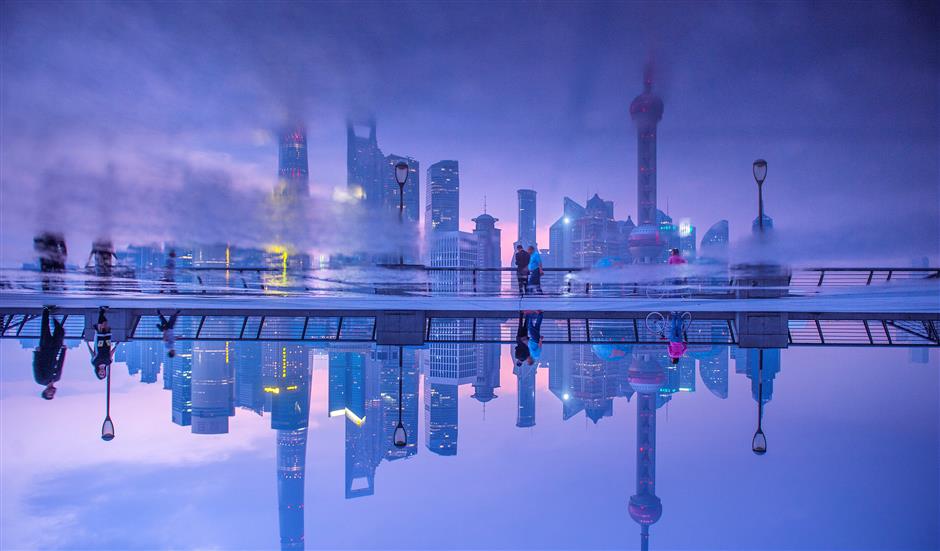 Photo rotated 180 degrees shows skyscrapers reflected in a puddle of water in the early morning at the Bund in Shanghai, the landmark of Shanghai, east China.

5G technology is reshaping urban life in Shanghai, as the city's first 5G video call was made, and 5G innovations are springing up.

Faced with uneven medical resource allocation, the city has been exploring ways to benefit all with its medical experts and cutting-edge techniques.

With the 4K HD live streams of surgeries supported by the 5G network, the operating rooms in Huashan Hospital, which is affiliated with Fudan University, now become learning bases for doctors nationwide.

The hospital, famous for its neurosurgery, now can broadcast the entire process of operations via the 5G network. Trainees across China can watch and learn without being on site.

"Neurosurgery is often carried out in a narrow space in the human bodies, and even the surgeon's vision can be limited," said Mao Ying, deputy director of Huashan Hospital, "However, 5G live streaming has offered an innovative solution to the remote education of medical techniques."

"Live streaming surgeries is very practical for doctors in primary-level hospitals like us," said Huang Lide, a neurosurgeon at the People's Hospital of Baise in southwest China's Guangxi Zhuang Autonomous Region who is studying neurosurgery at Huashan Hospital.

Real-time ultrasound images of local patients can be transmitted to Shanghai without delay for an expert consultation, whether the patients are from cities in northwest or southeast China.

The cutting-edge technology has not only contributed to the medical system but has also been put into use in the entertainment industry.

In April, live streams and VR games using the 5G network showcased on the 1,000th race of Formula One held in Shanghai, which allowed the audience to experience another kind of high speed.

Instead of simply watching racecars rush by, the audience was able to watch real-time movements of the racecars and contestants' subtle expressions.

The delay in traditional Internet live streaming was shortened to a few hundred milliseconds, with the realistic transmission of multi-angle images.

"Combining 5G with live streaming, VR and games, which attract young people, is a good start for the commercialization of 5G," said Li Meng, chief expert of the industrial economy research project of the Shanghai Academy.