China and US don't really compete in development of AI A latest AI report describes AI advantages in the US, China and the UK

China and the US have become leaders in the development of artificial intelligence, which means they are often regarded as competitors in innovation and fundraising.

In reality, each nation has its own advantages and strategies on artificial intelligence, or AI. Industry insiders say they are more complementary than competitive.

“No dot-com giant firm has succeeded both in China and the United States,” said Wu Jun, managing partner of Amico Capital, a veteran information technology executive and author of popular books on the technology industry. “The AI firms face totally different situations and environments in the two countries.”

Globally speaking, China and the US have leading AI industries in numbers and fundraising. They are also “code nodes” for international AI cooperative networks, according to a report released recently.

On the subject of international cooperative networks, China and the United States are the two “core nodes,” based on published professional papers. Between 2013 and 2018, there were 304,914 AI papers published. Of them, 74,408 papers came from China and 51,766 from the US. The two countries’ work is “deeply changing and reshaping” the global development of artificial intelligence, according to the report.

Facebook, Amazon, Microsoft, Baidu, Alibaba, and Tencent are the top six AI firms globally — all of them from the United States and China. They have advantages by virtue of massive research budgets, their own operating systems, and professional manpower and technology resources, Li said in his latest book “AI Superpowers,” which predicts industry trends into the next decade.

AI is now interdisciplinary, covering computing, engineering and mathematics, as well as practical application. With rapid development, AI has changed and improved research in physics, astronomy, energy and decision science, the report said.

In applications, the US has a leading position on artificial intelligence used in industries like finance, insurance and smart driving, Li said.

However, the development focuses of the two countries are still quite different.

Artificial intelligence has been used to reshape industries in the US, such as finance and automotive. China has advantages in applications such as voice, image recognition and computing vision. But many Chinese firms still lack the ability to monetize their technologies, said Wu.

Wu has worked for Google and Tencent in the past. He is the author of popular books like “On Top of Tides” and “Global Technology History.”

Of the top 100 most cited professional papers on artificial intelligence, China lags behind the US and UK. Chinese collaboration between research organizations, such as universities, and companies still has room for improvement. The US and Israel lead in that realm, according to the report.

“AI has become a worldwide focus covering all countries, rather than just a tech-savvy word spouted by major economies,” the report said.

In 2018, 12 countries and regions covering all the major global economies have set up national strategies or blueprints for development of AI, according to the report.

Industry experts are more concerned about trends in the field than talk of competition between countries.

Artificial intelligence is expected to replace humans in many jobs in the next decade. Countries and people must be well prepared for the radical challenge of job cuts and an increasing gap between rich and poor. It’s an unstoppable trend, according to Li.

In his latest book, “Global Technology History,” Wu focuses on how technology innovation, rather than empires and wars, change the world.

Technology innovation is one of the most powerful drivers of civilization, Wu said recently in a lecture at Shanghai Jiao Tong University.

China is taking serious steps to improve its AI education system. For example, it has published AI textbooks for university and middle school students.

"We will work on fostering multi-layered talent for AI and smart education, provide more space for the application of AI in education, train high-caliber teachers for AI education, and provide scientific and research innovations on the topic," Minister of Education Chen Baosheng said recently. To date, 85 degrees or academic projects on artificial intelligence have been established in 75 universities nationwide, according to the AI report. 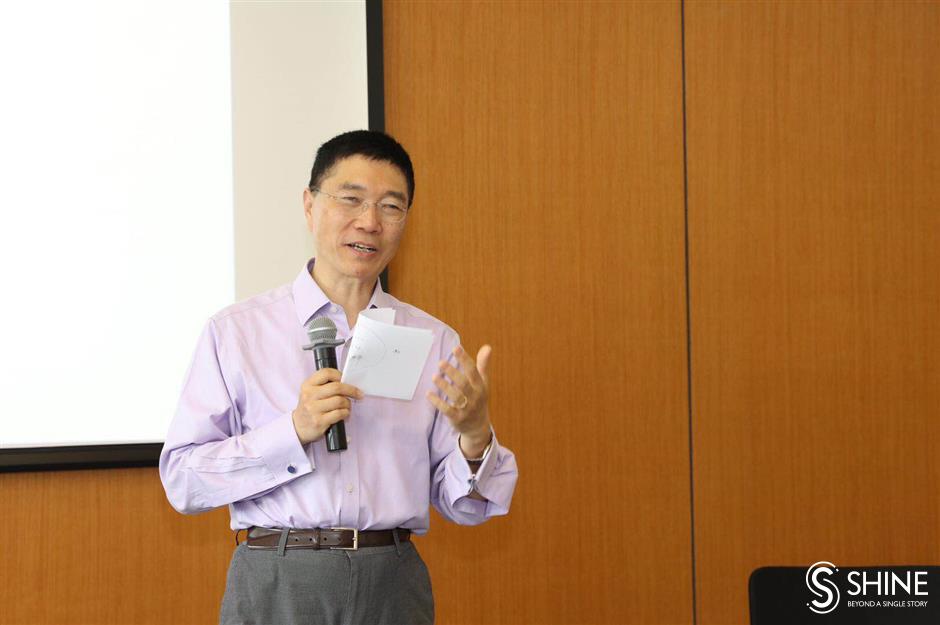 Wu Jun, a vetran IT industry executive and author of popular books, gave a lecture in the Shanghai Jiao Tong University recently.