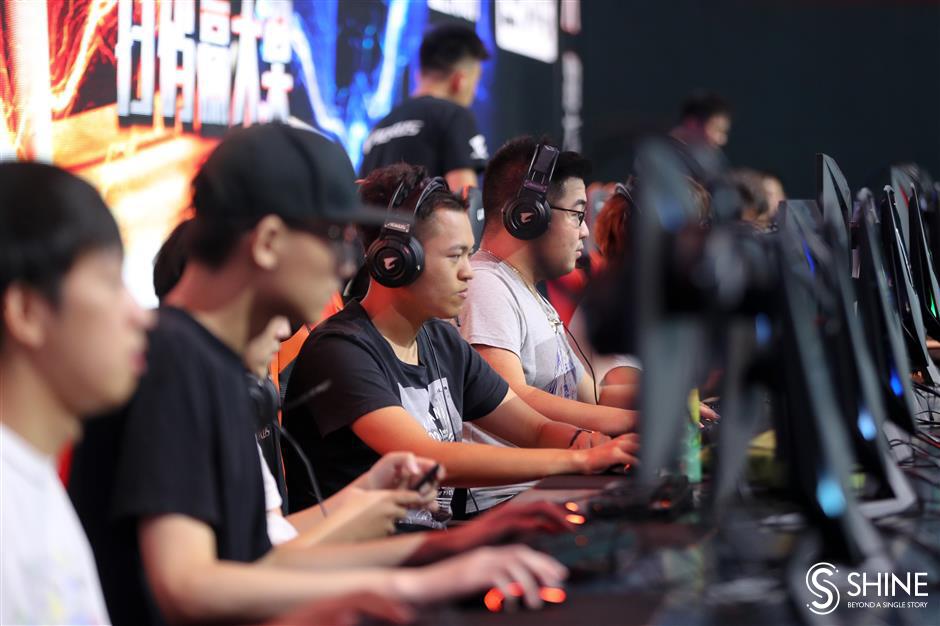 ESports players focus on a match of popular online game PUGB, or PLAYERUNKNOWN’S BATTLEGROUNDS, during the opening of ChinaJoy last Friday.

The development of eSports is a “city-level strategy,” which will fuel the development of various industries and create a new business ecosystem, according to Yu Xiufeng, director of Shanghai’s culture and tourism administration.

The city also announced guidelines on the construction of eSports venues.

Yu was speaking at a forum on the future of eSports in Shanghai at ChinaJoy, Asia’s largest gaming and digital entertainment exhibition, over the weekend.

Shanghai will hold its first eSport masters tournament during November and December this year.

Government officials and industry giants, including Tencent, Perfect World, NetEase and Blizzard, talked about their expectations of the industry and Shanghai’s hopes of becoming a global center for eSports within the next three to five years.

Li-Ning Gaming eSports, a new division of the sportswear company, claimed eSports had great potential in China and the rest of the world. Its influence and audience numbers will surpass those of soccer in the future, it said.

As per the guidelines issued by the administration, eSports venues will be categorized into four types based on size and capacity.

A-level venues, which will be at least 50,000 square meters and can accommodate more than 10,000 people, will host world-class events.

B-level venues, no less than 2,000 square meters with room for over 500 people, will be used for international and national games.

Smaller C-level venues will have some national and regional games while D-level ones will offer livestreaming videos and host tryouts.

On Saturday, 134,823 people attended the event, which ends on Monday, at the Shanghai New International Expo Center.