For days, Chen Shuxin stood at the store's gate to greet shoppers and photographers. As the head of Huawei's first directly managed flagship store, he has been overwhelmed by surging crowds during the weeklong National Day holiday that started Tuesday.

"We have to restrict the flow of customers every day," he said. "There's a lot of traffic coming in, and the queue often runs from the southern gate to the northern gate of our store."

The flagship store, which opened on September 28, is designed for people to "explore Huawei's most novel and comprehensive products, experience the fastest 5G connections, and discuss products and technologies." In addition, Chen said people can gain inspiration and exchange feedback here, too.

The three-story building with all-glass curtain walls has emerged as a new internet sensation in south China's Shenzhen.

The flagship store held a number of promotions during the National Day holiday. Chen said customer satisfaction during the opening period averaged 96 percent, according to the store's survey. 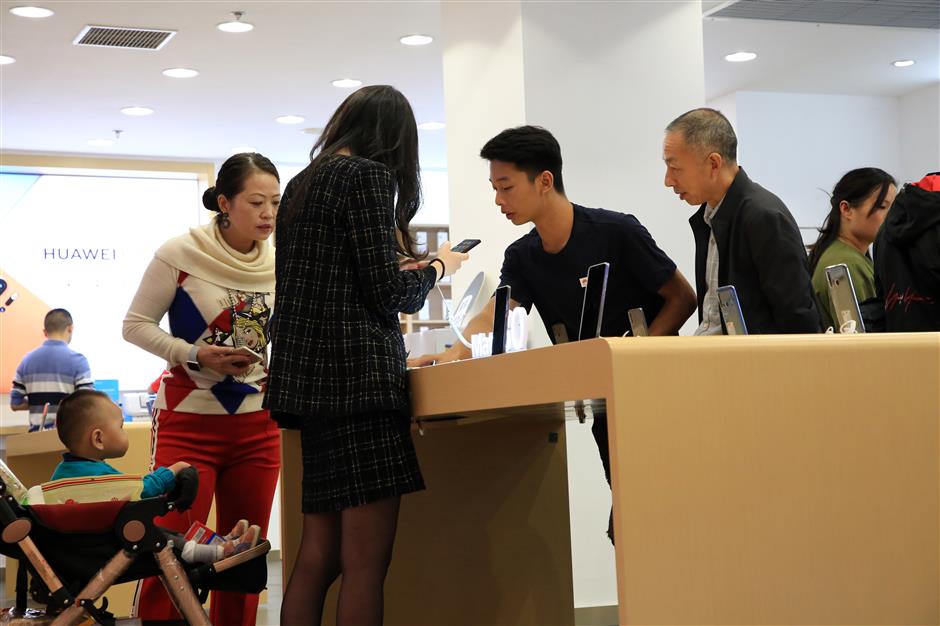 "We have to limit the purchase of some popular products to one for each customer," he said.

The most appealing is no doubt the Mate30 series of mobile phones.

"I am greatly impressed by the fact that the Mate30 Pro 5G phone supports NSA/SA networking," said Sun, who traveled 600 km to Shenzhen from Xiamen, Fujian Province. He was also very satisfied with its powerful camera features.

"Compared with the top products of Apple and Samsung, Huawei's products are of the same quality and have their own advantages and characteristics. I think they are almost on the same level," he said.

"I would never have imagined such a rise two or three years ago, when I thought Apple phones were the best," he added.

The Mate30 series of smartphones is Huawei's flagship product of the year. Huawei has not responded to questions about sales since the launch of the Mate30 series in Shanghai on September 26. Feedback from some e-commerce platforms and brick-and-mortar stores suggests sales of the device are booming both online and offline.

Yu Chengdong, CEO of Huawei's consumer business, had previously expected sales of the product to reach 20 million units over its entire lifecycle.

In the eyes of some market participants, the products sold like hotcakes and long queues of buyers demonstrate Huawei's resilience and the great potential of China's high-end manufacturing sector to face complex external shocks and challenges.

"In the past, Chinese consumers would only queue for new iPhones, but now it's a different story," said an entrepreneur making terminal units for brands such as Huawei who asked to remain anonymous.

"With the rise of Chinese mobile phone brands such as Huawei, Apple is no longer the sole weather vane of the global smartphone industry," he said.

Huawei is his number one customer this year as the company continues to ramp up production.

Yu Chengdong, CEO of HUAWEI Consumer Business Group, introduces the Kirin 990 chip during a speech at the opening press conference of the Internationale Funkaustellung Berlin (IFA), an international consumer electronics fair, in Berlin, Germany, on September 6, 2019.

The upturn in the terminal sector is only a microcosm of Huawei's response to external challenges.

Huawei Chairman Liang Hua admitted in an earlier interview that Huawei's mobile phone business has suffered a sharp decline in some overseas markets since May due to the lack of authorization from Android.

However, the launch of the Mate 30 series on September 26 was dazzling. According to Yu Chengdong, shipments of Huawei's smartphones and laptops rose 26 percent and 249 percent year on year in the first eight months, respectively.

At an earnings conference for the first half of 2019 held on July 30, Liang Hua said that difficulties would not alter the direction taken by the company.

In the first half of this year, Huawei recorded a sales revenue of 401.3 billion yuan (US$56.7 billion), up 23.2 percent from one year earlier, with a net profit margin of 8.7 percent.

Industry observers believe that with core technologies such as 5G and strong risk awareness, Huawei was able to cope with external shocks. In the case of the Mate 30 series, the handset installed with a self-developed Kirin 990 chip, it has retained the lead in some functions despite the interrupted availability of its operating systems and select parts.

At the Huawei Developer Conference held on August 9 to 10, Huawei officially launched the HarmonyOS, a microkernel-based and distributed operating system designed for various devices and scenarios.

Huawei has been investing heavily in technology research and development (R&D), which is expected to reach 120 billion yuan in 2019.

Liang Hua said the company remained confident and would continue to invest in the future. Meanwhile, Huawei plans to invest US$100 billion over five years to make its network architecture simpler, faster, safer and more credible.

Ren Zhengfei, founder and CEO of Huawei, gestures during a round table meeting with the media in Shenzhen City, south China's Guangdong Province on January 15, 2019 in this file photo.

At an open dialogue on September 26, Ren Zhengfei, founder and CEO of Huawei, renewed his call for collaborative innovation in global markets. The 5G standard, a brainchild of hundreds of countries and tens of thousands of scientists, will support the development of an AI society, he said.

Huawei's long-term vision is contributing to the rest of the world in the fields of science and technology.

In an earlier interview with Xinhua, Ren said that Huawei remains proactive in participating in global scientific research and innovation. Huawei has set up dozens of R&D centers around the world.

"The beneficiaries of Huawei's overseas R&D investment are scientific research institutions worldwide, including universities in the United States," he said.

Xu Wenwei, director of Huawei's strategic research institute, said that the "Innovation 2.0" Huawei was promoting would be open, innovative and inclusive.

Huawei would set up a special fund to support basic scientific research and talent training, and promote breakthroughs in basic theories.

Huawei is currently investing US$300 million a year in partnerships with universities and other research institutions, Xu said.

"We will work with more universities to set up innovative technology labs which focus on breakthroughs and innovations in basic research to provide win-win outcomes among academia and businesses," Xu said.