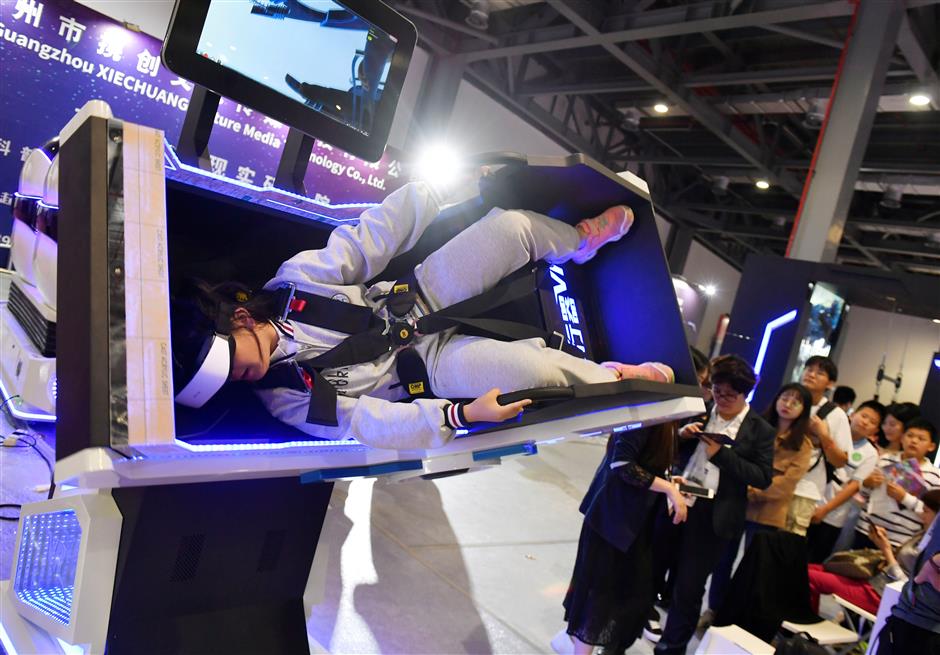 A visitor at the 2019 World Conference on VR Industry in Nanchang, Jiangxi Province, enjoys the virtual roller coasters with VR glasses.

The 2019 World Conference on VR Industry kicked off on Saturday in Nanchang, capital of east China’s Jiangxi Province, highlighting the latest technologies, products and types of businesses related to the virtual reality industry.

Themed “VR Adorns the World, VR plus 5G for a New Era of Perception,” this year’s conference aims to explore the 5G-enabled development of the VR industry in the initial stage of 5G commercialization, which is expected to cultivate new opportunities for various VR application.

More than 7,000 experts, scholars and entrepreneurs in the field of VR, AR (augmented reality) and MR (mixed reality) from home and abroad attended the conference, nearly 300 of whom will share their insights at the main forum and 23 parallel forums, according to the organizers.

Antonio Julia just had time to sit down to sort his materials after seeing off a group of Chinese business representatives who came to inquire. His booth was a much-visited one at the 2019 VR/AR Products and Applications Exhibition held concurrently as part of the conference. It is the first time for the co-founder of DronOSS, a German startup that trains would-be drone pilots using VR, to attend the expo.

“Our VR training system will not only help increase flying proficiency, but reduce equipment losses since unskilled operation often leads to crash of unmanned aerial vehicles and other equipment damages,” Antonio Julia said.

DronOSS has found potential partners in Europe and Japan, and the hot VR conference brought the company and its co-founder to Jiangxi.

“China is a gigantic market and Jiangxi has cultivated a mature VR industry chain. Hope to find a partner here,” he said.

With a tripled display area totaling 60,000 square meters compared with the 2018 edition, this year’s expo received 215 domestic and overseas corporate exhibitors and industry organizations from Japan, India, Germany and other countries and regions, demonstrating their latest development of VR and AR products and applications.

Guo Ping, the rotating chairman of Chinese tech firm Huawei, said that VR and AR, which are revolutionizing human-computer interaction, will be the vanguards of 5G application as their technical challenges are being overcome one by one.

“VR with 5G is bringing the experience into a ‘comfort phase’ and Huawei has positioned itself in building digital superhighways for VR and AR to help industries prosper,” Guo said.

“China has one of the most active VR markets in the world, with an innovative VR industry and huge growth potential,” said Miao Wei, China’s minister of industry and information technology.

China’s VR market will amount to 54.45 billion yuan (US$7.7 billion) by 2021, according to the Ministry of Industry and Information Technology.