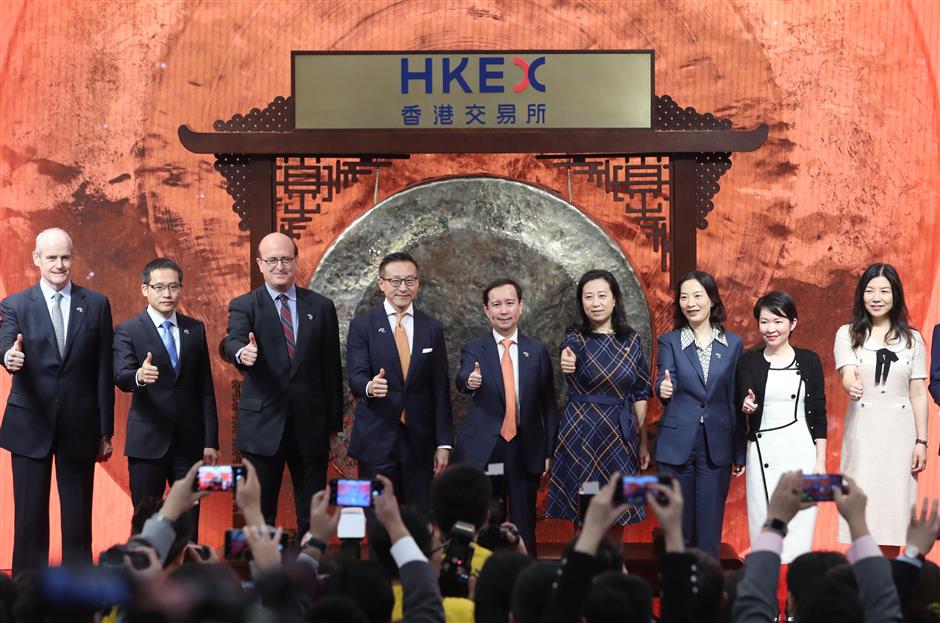 Alibaba Group CEO Daniel Zhang (center) poses for commemorative photo at the ceremony for becoming listed on the Hong Kong Exchanges and Clearing Limited in Hong Kong on November 26.

Shares in Chinese online retail giant Alibaba soared almost 8 percent on their Hong Kong debut on Tuesday, after raising at least US$11 billion in the city's biggest IPO in nearly a decade.

The company drew back the curtains on the trading day and immediately saw its share price rally. It had set the price for each share at HK$176 (US$22), but it soon jumped 7.67 percent to HK$189.5 in the first few minutes.

Alibaba called the listing a vote of confidence in the city.

Asia's most valuable company, which is also listed in New York, has said previously it could raise almost US$13 billion via the initial public offering.

With 500 million shares offered to investors, the company has said it would raise HK$88 billion. Eight is considered an auspicious number in China. Meanwhile, its stock code is 9988, which is also auspicious in Chinese culture, meaning "longstanding prosperity."

If it chooses to use its over-allotment option to sell a further 75 million shares, Alibaba could bring in HK$101.2 billion.

Even at the low end, the listing would still be Hong Kong's largest initial public offering since insurance giant AIA raised US$20.5 billion in 2010.

Chinese mainland authorities have also stepped up moves to attract such listings, including launching a new technology board in Shanghai in July.

Alibaba's debut comes after the city's exchange tweaked the rules to allow double listings, while Chief Executive Carrie Lam had also been pushing the firm's billionaire founder Jack Ma to sell shares in the city.

The company said in the statement that it "plans to use the proceeds from the Global Offering for the implementation of its strategies to drive user growth and engagement, empower businesses to facilitate digital transformation, and continue to innovate and invest for the long term."