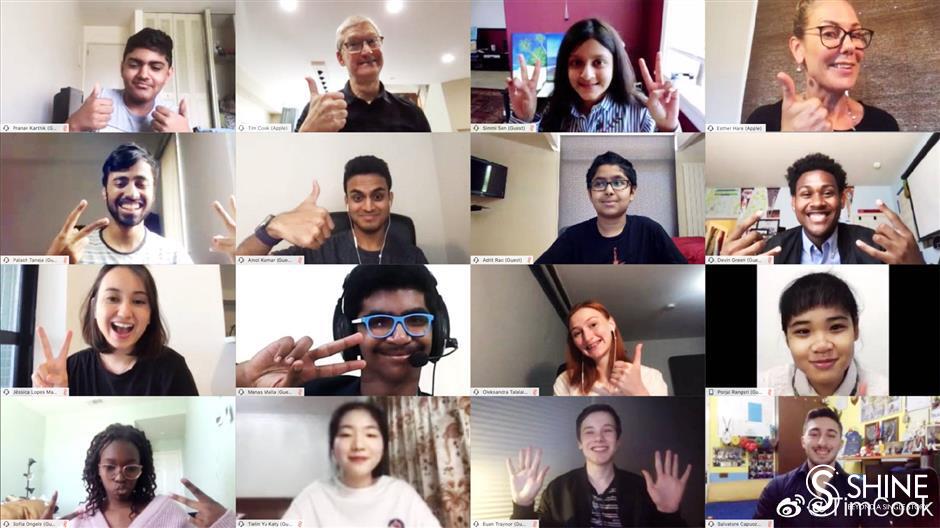 Apple Inc announced system and interface updates for the iPhone, iPad and Mac during its annual developer conference, including some adaptions to Maps specially for China.

Student developers from Shanghai were also invited to talk with Apple’s CEO Tim Cook online. He said they were creating apps that “do incredible things like help prepare for pandemics, reduce our carbon footprints and connect victims of sexual assault with resources they need.”

On his Weibo account he wrote: “Amazing to see how they’re dreaming big and changing the world.”

The developers included 17-year-old Yu Tieling, a high school student. She had created an app on paper cutting, a traditional Chinese art.

She liked talking with Cook and other developers and wants to use coding to change the world, Yu told Shanghai Daily.

“I do not only want to use my code to affect the world, but my passion and ability to lead more girls into the world of programming as well,” Yu said.

At this year’s conference — a virtual event due to the coronavirus pandemic — the tech giant announced a series of updates including details of its upcoming iOS 14 software for the iPhone. The majority of updates will be available later this year.

Updates to iOS 14 include an app Library with improvements to the way they appear on screen, a digital car key initially to be used in a BMW model, a translation feature for 11 languages powered by Siri and a revamped Apple Maps.

Maps will for the first time include directions for bicycles and check limits on car numbers automatically in cities including Beijing, making it easier for riders to navigate amid complicated policies for environment protection.

The new iOS interface and features have many similarities to Android functions, industry observers said, but they added that Apple still lags behind in China other smartphone brands such as Huawei, Oppo and Vivo, all of which have launched localized Android interfaces.

According to researcher Counterpoint, Samsung was the global market leader with a market share of 18.5 percent in the first quarter, followed by Huawei’s 14.2 percent, and Apple’s 13.7 percent.