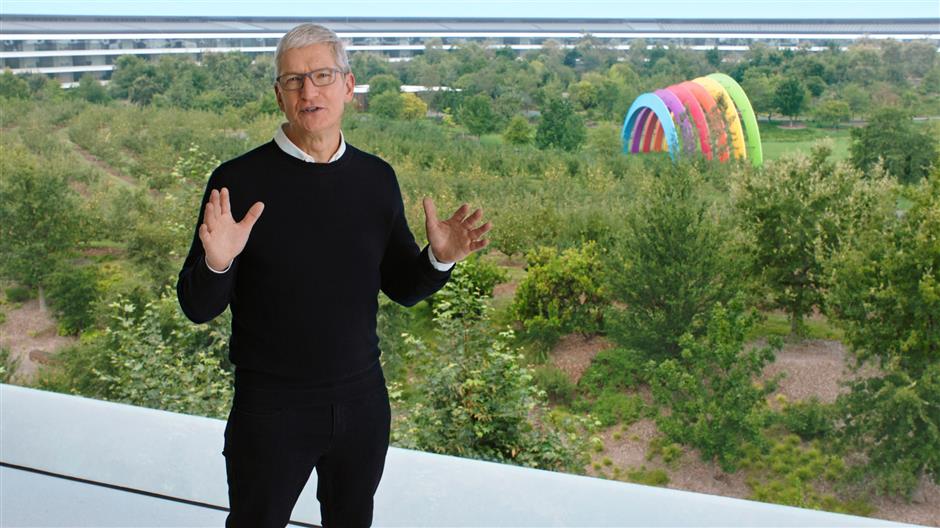 A handout still image from the keynote video released by Apple Inc shows Apple CEO Tim Cook kicking off a special event at Apple Park in Cupertino, California, on September 15, 2020.

Apple said on Tuesday it is putting TV, music, news and more in a subscription bundle as it increases its push into services tied to its iPhone "ecosystem."

An Apple One bundle to be available later this year will start at US$15 monthly and include a freshly launched fitness service tied to Apple Watch.

The Silicon Valley titan made no mention of a keenly anticipated iPhone 5G considered vital to the company's fortunes, with analysts expecting that debut next month, due to disruption in production caused by the coronavirus pandemic.

The US$15 Apple One bundle includes Apple Music, Apple TV+, the Apple Arcade game service and iCloud storage. A US$20 family plan can be shared by up to six people.

"With Apple One, you can access the best of Apple entertainment across all your favorite devices with one simple subscription," said Apple Senior Vice President of Internet Software and Services Eddy Cue.

The Fitness+ service introduced by Apple is tied to its smartwatch line-up, which was enhanced with a Watch SE at US$279, a price lower than that of its flagship watches.

Apple also unveiled its Series 6 smartwatch, starting at US$399, and added new features including monitoring sleep and blood oxygen levels as well as detecting when wearers are washing their hands.

"Hand washing detective recognizes the motion and sound when washing your hands and encourages you to continue for the recommended 20 seconds," Apple Chief Executive Tim Cook said during a presentation streamed from the company's spaceship campus in Silicon Valley.

Apple touched on the roles its smartwatch, iPad and digital services could play in working or learning remotely and staying healthy as the pandemic continues to disrupt people's lives.

Apple Watch also serves as an anchor to the tech giant's mobile software, since it syncs with the iPhone.

"The key part for Apple is to keep the base of iPhone users and sell them a ton of accessories like AirPods and get services," said analyst Patrick Moorhead of Moor Insights and Strategy.

Apple also announced its eighth-generation iPad with its A12 Bionic chip starting at US$329, and a more powerful iPad Air from US$499, powered by the A14 Bionic chip.

"While the focus for the street remains the iPhone 12 5G supercycle set to kick off in early October, the launch of the next generation Apple Watch, iPad Air, and services bundle are key ingredients in Cupertino's recipe for success," Wedbush analyst Daniel Ives said of the Apple announcements.

5G networks are touted as promising an exponential leap in the amount and speed of wireless data, enabling advances in self-driving vehicles, virtual reality, connected health and more as sensors and servers communicate instantly.

Apple "absolutely needs" a 5G version of its iPhone, according to Techsponential lead analyst Avi Greengart.

"Not for the US, but for China where 5G is driving purchase decisions," Greengart said.

Apple rivals have already introduced 5G models, and China is far ahead of the US when it comes to the new generation networks.

New generation 5G networks have also taken shape in South Korea and in parts of Europe.