Bitcoin owners and traders had their Cyber Monday with the cryptocurrency price hitting US$20,000 on Tuesday.

The price rise comes with more institution investors, halved supply, transaction support of mainstream platforms such as eBay and recognition and development of blockchain, a key technology adopted by Bitcoin, industry insiders said.

“BTC hits a record high and has its big cycle, with halved market supply and other reasons,” said Kang Luzhi, Huobi’s senior analyst.

After every 210,000 blocks, the reward of each block, or the output of Bitcoin, will be halved, according to Bitcoin’s mechanism designed by its founder Satoshi Nakamoto.

Bitcoin has risen by more than 170 percent this year, benefiting from an unprecedented increase in demand for risky assets under fiscal and monetary stimulus globally, investors’ thirst for anti-inflation assets and expectation that cryptocurrency and its technology will gain mainstream recognition, according to media reports and analysts. 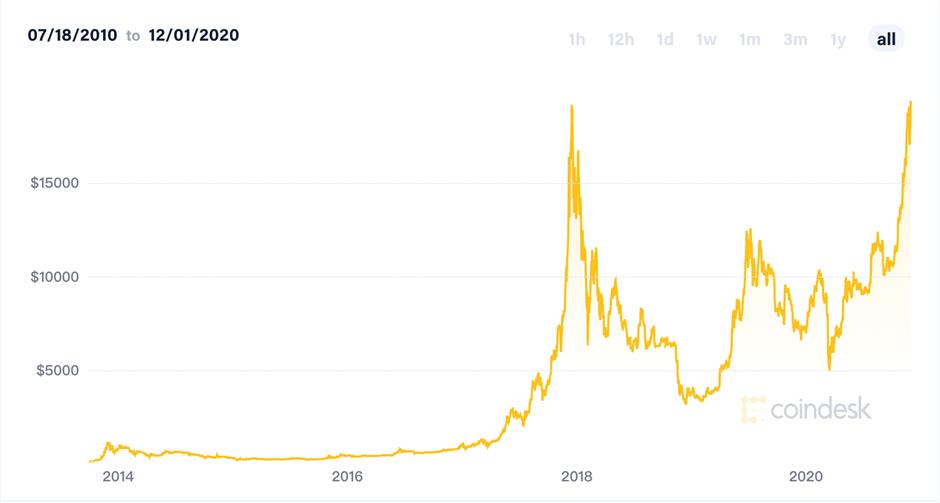 Bitcoin has risen by more than 170 percent this year to hit a three-year high.

The entry of institution investment and payment platform Paypal support for cryptocurrency transactions are a “new power” in the cryptocurrency market to fuel the Bitcoin price, said Kang.

For example, Guggenheim Funds Trust filed an amendment with the US Securities and Exchange Commission to invest 10 percent of the fund’s net asset value in Bitcoin, or US$500 million, Coindesk reported at the weekend.

Central banks, including the People’s Bank of China, are testing or drafting plans on digital currency, using various technologies including blockchain.

In October, China’s central bank issued 10 million yuan (US$1.47 million) worth of the new e-yuan currency, called digital currency electronic payment (DCEP), in a trial in several regions. It made China the first major economy in the world to advance its own digital currency.

Bitcoin is the biggest application of blockchain now, which raises global investors’ expectations regarding the cryptocurrency.

Chinese cryptocurrency trading and tool firms and blockchain and supply chain service providers surged in the stock markets on Tuesday.

But the market will probably face fluctuations after hitting the record high. The line of US$10,500 has strong support, said Kang.

China has strong regulations on cryptocurrency trading for personal investors and operating platforms, which often bring high risk and frauds.

Chinese regulators have shut down Plus Token, a cryptocurrency platform, and seized part of its cryptocurrency assets valued 14.8 billion yuan totally, including 194,800 Bitcoins. The platform’s operators have been sentenced to up to 11 years, a Jiangsu Province court said last week.

There are big differences between China’s official digital currency and cryptocurrencies such as Bitcoin.

The official e-yuan will be a legal currency, based on national credit and a stable value, while cryptocurrencies are dependent on the consensus of the user community and often have highly volatile swings in value, industry officials said.