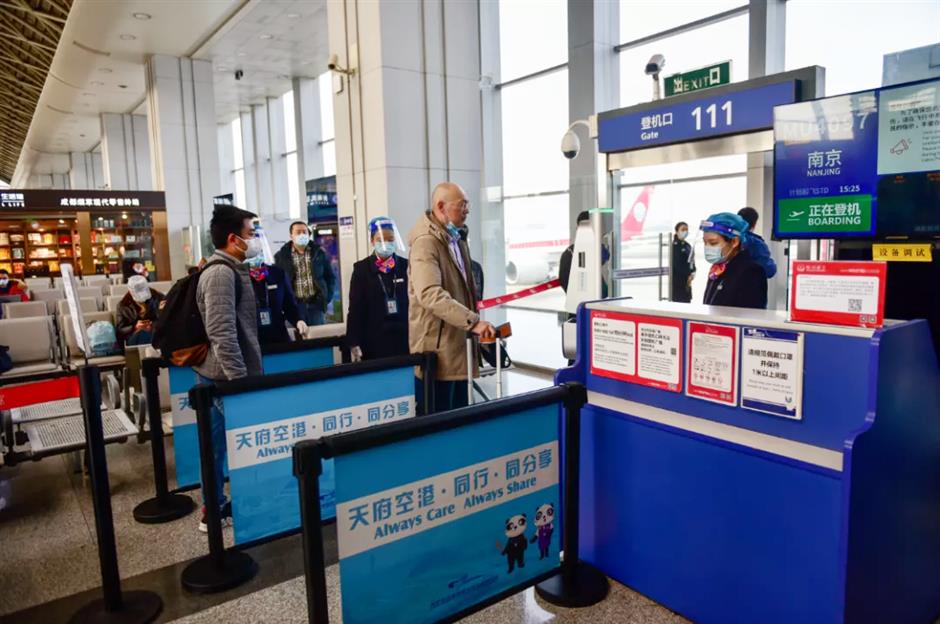 Passengers board a flight with contact-free procedures in operation.

A contact-free security and boarding system is in operation at Chengdu airport in southwest China's Sichuan Province to protect passengers during the pandemic.

The system, powered by artificial intelligence, has features that include a virtual reality guide, facial recognition of people wearing masks and a contact-free security process, said its developers, including Huawei, TravelSky and CloudWalk, an AI startup.

The system made its debut on Friday ahead of the Spring Festival travel rush, the busiest days of the year for airports and railway stations.

The system can offer automatic 3D video images after identifying passengers to allow them to easily find their destination gates. Passengers can pass security control gates within a second, even wearing masks, based on an intelligent recognition algorithm used in domestic airports for the first time, according to CloudWalk.

CloudWork is one of China's “Four AI Dragons,” along with Megvii, SenseTime and Yitu, each of which is valued at more than US$1 billion. CloudWalk has applied to list in the Shanghai STAR Market.

Shanghai’s airports have launched similar contact-free features for holiday traffic during the pandemic. They include security verification machines, a luggage tracking system with radio frequency identification technology and the trial operation of a self-service boarding gate (Gate 47) at Hongqiao airport’s Terminal 2.