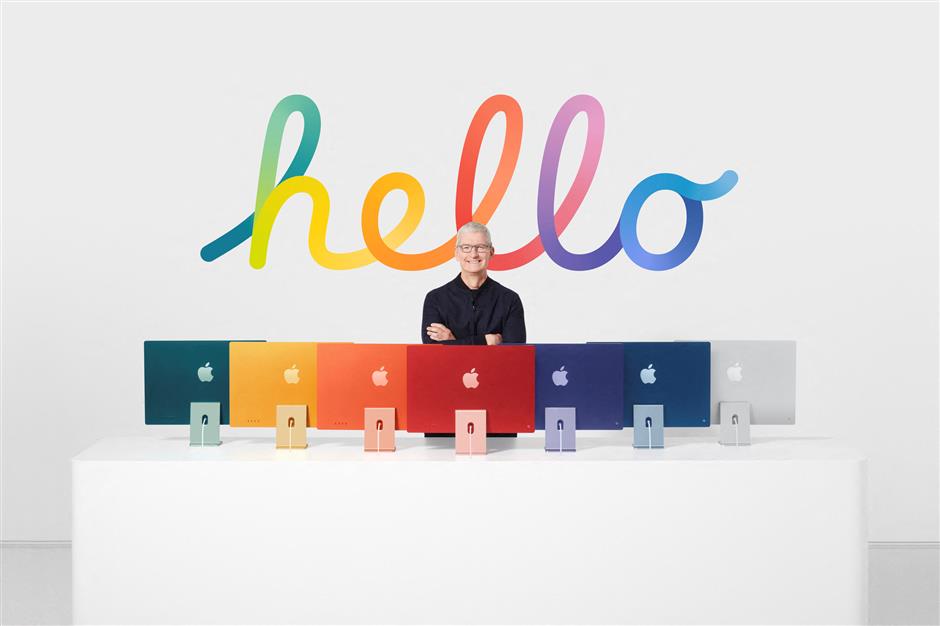 This handout released and taken on April 20 by Apple Inc shows Apple CEO Tim Cook posing next to the redesigned iMac featuring the company's new in-house M1 chip during a special event at Apple Park in Cupertino, California.

Apple Inc announced on Tuesday a range of new computers, a paid podcasting service and devices for finding lost items, signaling the continued expansion of its once-simple product line into more and more corners of customers' lives.

The new US$30 AirTags, tiny devices that can be attached to items such as keys and wallets to locate them when they are lost, were applauded by analysts as a likely hot-seller that would also keep the company's more than 1 billion customers locked into its products.

A new iPad Pro tablet, featuring the same Apple-designed processor that powers the company's more recent Mac computers, has keyboard and trackpad options that help make it a full-blown alternative to traditional laptops and desktops.

And a refresh of the Mac desktop line boasts seven color options, harkening back to the famous candy-colored Macs that helped Steve Jobs revive the company in the 1990s.

The announcements show how the iPhone maker is accelerating the expansion of its product portfolio and working to keep customers committed to its family of devices even as government scrutiny of the power and reach of major technology firms intensifies.

Most of the product introductions had been telegraphed before the presentation, which had no major surprises. Shares of Apple were down 1.3 percent, slightly more than the 1 percent drop in the Nasdaq index.

The new iMacs, which start at US$1,299, feature a higher quality front-facing camera and microphone, responding to complaints from consumers during the pandemic that the computer's cameras had not kept pace with iPhones and iPads during an era of pervasive video calls.

"Apple cameras in their computers have been terrible, frankly. They finally have a reasonable camera in the iMac," said Bob O'Donnell, head of TECHnalysis Research, who added that the new colors were likely to stand out in a market dominated by black, white and silver machines. "For right now, it feels fresh and new."

The new iPad Pros, starting at US$799, use the same M1 chip as Apple's other computers, rather than the beefed-up version of iPhone chips found in previous models. The tablets also have additional ports for connecting monitors and 5G connectivity, while featuring a higher-quality display than the company's laptops.

Analysts said that when combined with Apple's keyboard and trackpad accessories, the new iPad Pro models could be a compelling replacement for a laptop, especially for content creators or business travelers. But those accessories also push the price to nearly US$1,100 — more than Apple's cheapest laptop, the US$1,000 MacBook Air.

Ben Bajarin, principal analyst for consumer market intelligence at Creative Strategies, said the devices are not likely to be volume sellers but will target the niche of consumers who value versatility.

"If you want to go the gamut from mobile production, content consumption and or creativity, that’s the device that does it,” he said.

Apple also announced podcast subscription services that will compete with rival Spotify Technology SA, a move to regain ground in a market it popularized years ago but never made money from.

Apple shares have risen nearly 95 percent over the past year, faster than the 63 percent rise in the Nasdaq Composite Index, thanks to a record US$274.5 billion in sales for fiscal 2020 as consumers stocked up on electronics during the pandemic.

The AirTags announcement could result in a new round of complaints to lawmakers that Apple is hurting smaller rivals. Tile, a private company that has sold a competing tracker for nearly a decade, last year testified before the US House of Representatives that Apple's App Store rules had made it harder to use Tile's products and will be called before the US Senate to testify on Wednesday.

Apple has said it subjects all apps, including its own, to the same App Store review rules, and recently allowed third-party developers to access the same systems as its AirTags. 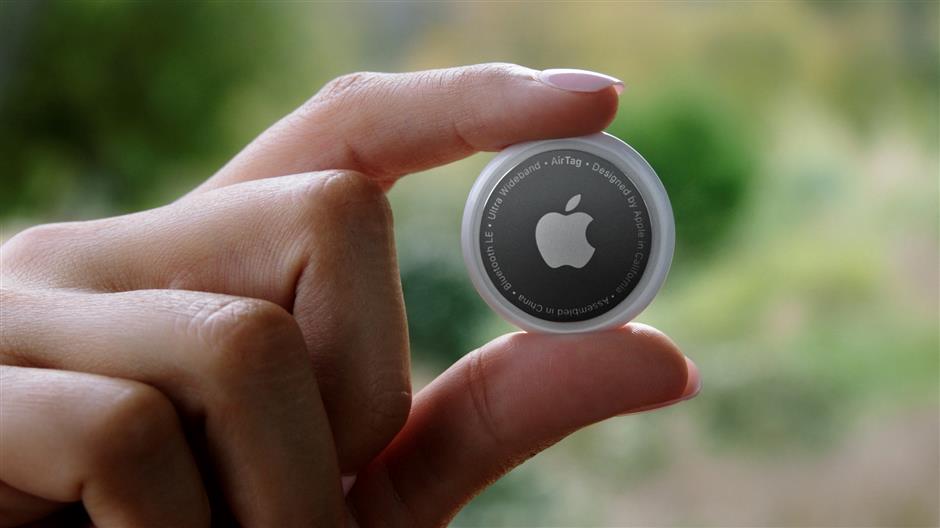 This handout released and taken on April 20 by Apple inc shows the Apple Air Tag during a special event at Apple Park in Cupertino.