Pan Qiuyun, Party secretary of Yutian Village of Jinze Town, is confident of the development of the town thanks to the landing of Huawei Research and Development Center.

"In the past, young people went to the core area of Qingpu to work due to shortage of jobs here. But now, professionals in other parts of Qingpu are eager to work here," said 53-year-old Pan who was born in Yutian Village.

"It was all because of the Huawei Research and Development Center which brings infinite possibilities to the tranquil town in the west zone of Qingpu," said Pan.

Residents here made a living by farming for decades.

In November 2017, they learned during a meeting about the launch of the Huawei project.

"It was like breaking news for us as nobody ever expected such a big project would land at our small village," Pan recalled, still excitedly.

Covering more than 2.2 million square meters, the project has an intended investment of more than 10 billion yuan (US$1.5 billion).

It focuses on the research and development of wireless networks and the Internet of Things and is part of Huawei's strategy for diversified industry development.

It is expected to accelerate the gathering of high-tech industries and fuel regional economic development in Jinze. 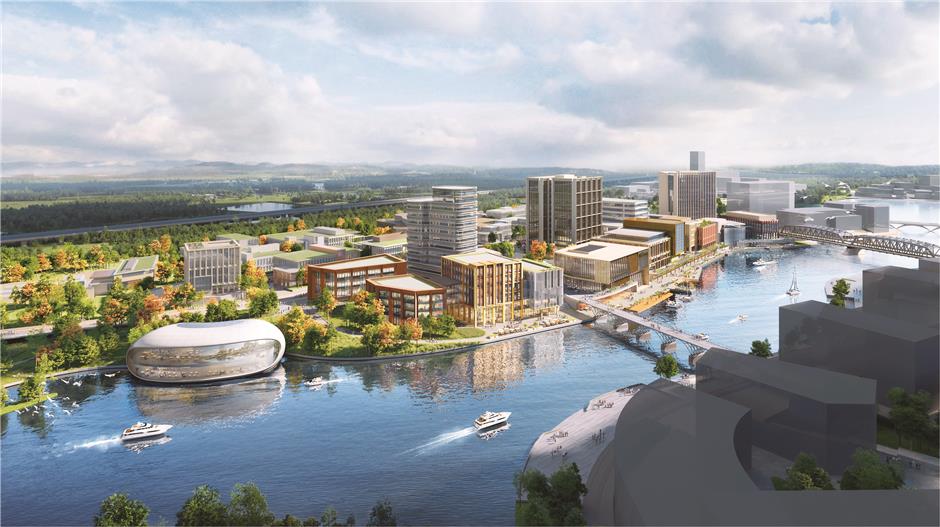 On January 17, 2019, a plot of land was allocated for the complex, an important landmark in the project.

"It is part of Huawei's strategy to integrate into the development of the Yangtze River Delta region and participate in Shanghai's building-up of a science and technology innovation center with global influence," said district officials. "It also marks a step forward to turn Qingpu into the 'gate of Shanghai.'"

In September 2020, construction of the center started, and it is scheduled to be completed in 2023.

The construction of some supporting facilities such as relocation housing, the west extension of Metro Line 17 and nearby roads has also started.

It means for Yutian Village residents that convenient traffic, quality medical treatment and education resources on their doorstep are no longer a dream.

Based on the project's blueprint, it will create a classic micro city and a modern classic architecture museum, comprising different scenes such as urban blocks, colleges, hills and watertowns.

It will be turned into a multi-function complex community with research and development, office and training functions. After completion, small trains and boats will be set up as short-distance transportation inside the industrial parks.

Jinze Town is expected to become a talent pool and home to an estimated 30,000 research and development professionals.

A science and technology innovation center is taking shape in Xicen area thanks to the magnet effect in the industry chain of Huawei.

Covering about 200 hectares of land, the Xicen Science and Technology Innovation Center will be located west of the Huawei Research and Development Center.

It will develop industries in the high-end information technology spectrum with Huawei and gather a cluster of innovation industries in the Yangtze River Delta Ecology and Greenery Integration Demonstration Zone.

It will also develop tourism, culture and sports industries and high-end business R&D centers under the spill-over effect of the Huawei Research and Development Center.

A trillion-yuan-level digital economic belt is taking shape in Qingpu under the national strategy of the integrated development of the Yangtze River Delta region and China International Import Expo, the advantage of Qingpu's digital economy development.

"In the beginning, most villagers held a wait-and-see attitude about the project, and it took nearly one year for the first batch of 169 households to sign relocation contracts," said Pan.

"It was shortened to seven days for the second batch of 96 households last year as they became familiar with the project," said Pan. "Recently, even my former classmate now working in the United States asked me about the Huawei project as he plans to return."