We are growing! Online criticism of tree-planting scheme refuted by Ant Group 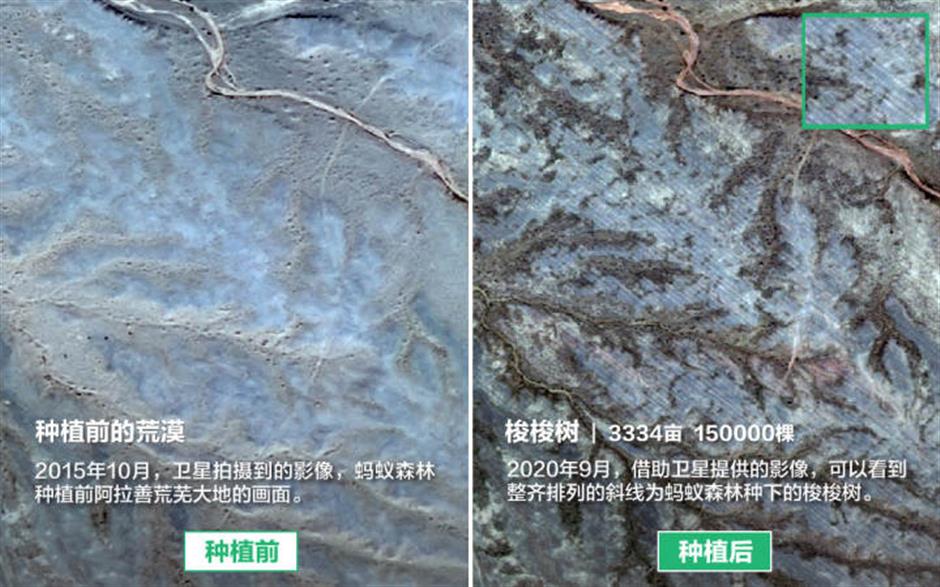 Recent satellite footage of the No. 277 plot at the Alxa League in the Inner Mongolia Autonomous Region shows noticeable green areas (right) compared with footage taken in 2015 (left).

Ant Group refuted online claims that its tree-planting program which began in 2016 has not planted greenery as it promised at some plots.

A social media post began to circulate over the weekend, claiming that almost no saxaul trees have been planted at plot No. 277 at the Alxa League in the Inner Mongolia Autonomous Region.

Ant Group said in an official post on Monday that the planting of 150,000 saxaul trees at plot 277 was completed in 2019 and has received certification from third-party supervisory bodies.

Ant said it has made a donation to the China Green Foundation, which was responsible for tree-planting at the plot in 2019, and the latest satellite footage shows plenty of noticeable growth compared with footage taken in 2015.

Saxaul trees have been sparsely planted with about 45 trees for every 666.7 square meters of land to follow ecological plantation and greenery rules, it said.

Alipay's Ant Forest was launched in 2016 and has been encouraging users to adopt digital payment services and redeem virtual green energy points to have trees planted.

It has attracted more than 600 million participants and has led to the planting of 326 million trees in 11 provinces in collaboration with environmental protection bodies.

The blogger with more than 1.4 million followers who originally made the post on the Twitter-like microblogging site Weibo has apologized that he failed to notice the short saxaul trees and made incorrect allegations.