Apple China posted a revenue growth of 21 percent in the fourth quarter, confirming the Chinese market as a major growth engine for the brand's record-high quarterly global income, Apple said on Friday.

Apple was crowned as the No. 1 brand in Q4 in the domestic market, the first time since 2015, thanks to strong demand for iPhone 13 models, said researchers, including Canalys.

In the fiscal quarter ending in December, Apple posted 11 percent growth in revenue to hit US$123.9 billion, a quarterly record that beat analysts' expectations. iPhone revenue grew 9 percent to US$71.6 billion.

In China, Apple's revenue reached US$25.8 billion in the quarter, up 21 percent from a year ago.

"Apple provided an adequate supply to the Chinese market amid its tight global supply. Apple's China market share was its highest, a record for Apple since it entered the market in 2009," said Canalys Analyst Toby Zhu. 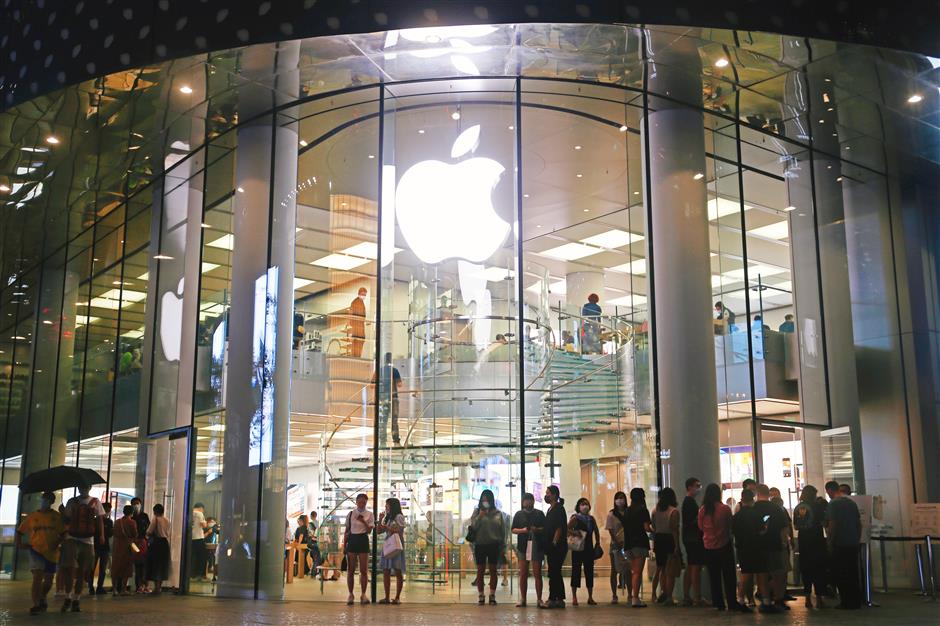 Apple surprised the market with a lower launch price for the iPhone 13 series, greatly stimulating consumer interest in Q4 at a time when overall retail consumption was subdued in China, said Canalys.

The strategy received a warm market response in China where people waited several weeks to get popular models like iPhone 13 Pro and iPhone 13 Pro Max. Last year some users paid an additional 500 yuan to 1,500 yuan (US$78-234) to scalpers or on auction websites to get their iPhones early.

"Thanks to Apple, it brought me a generous year-end bonus (in 2021)," a Shanghai-based marketing person, who declined to be named, told Shanghai Daily. The person worked for a company in the iPhone supply chain.

Apple was crowned with the highest local market share of 25 percent in Q4, followed by OPPO, Honor, Xiaomi and Vivo, which held 15 to 16 percent share, Canalys said in a report on Friday. 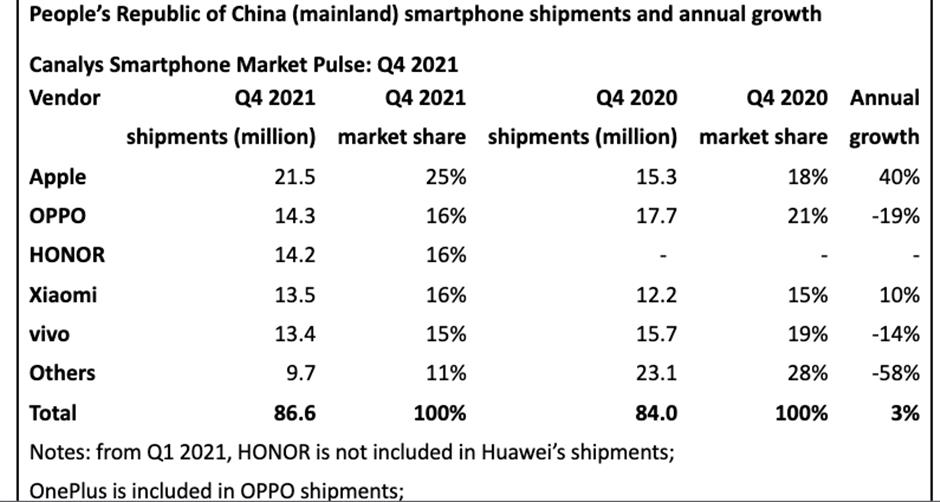 Previously, Chinese makers like Huawei, OPPO and Vivo dominated the domestic market while overseas giants like Apple and Samsung lagged behind.

The absence of strong Android competitors in the high-end segment also contributed to Apple's stellar performance this quarter. For example, Huawei struggled amid strict US tech sanctions.

As Shanghai Daily reported, Chinese smartphone brands have launched their own counter-attacks to Apple's surprise surge since the fourth quarter.

They vow to reclaim the high-end market share that Huawei lost and Apple now owns and include well-established Xiaomi, Vivo and OPPO and fast-movers like Honor, Realme and OnePlus.

They have fast-tracked their flagship range debuts since December, introducing foldable models and features that Chinese consumers like, such as eSports, selfies and fast-charging.