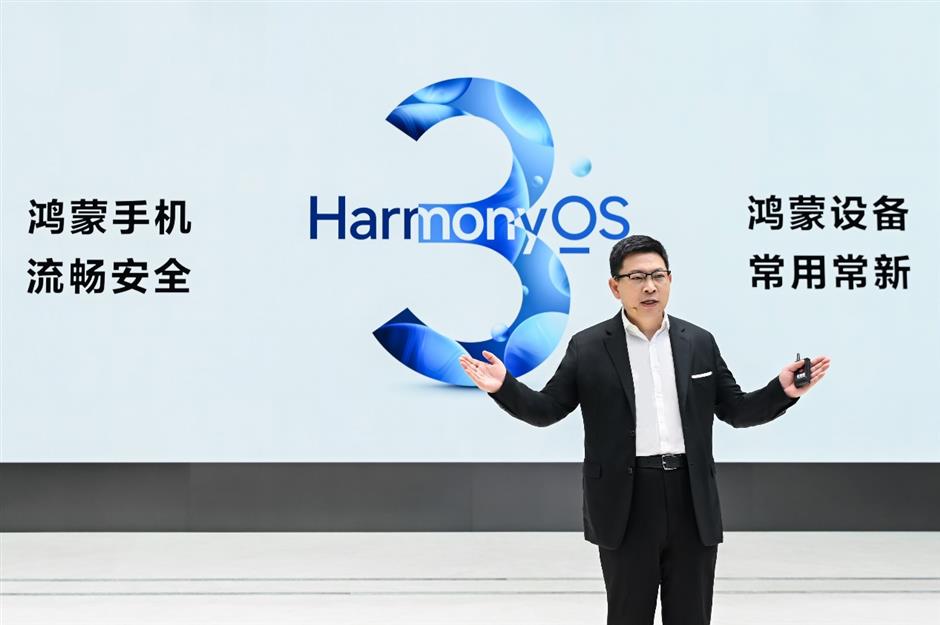 Chinese brands are expanding their non-smartphone business and ecosystems to connect a wide range of additional smart devices in pursuit of strategies to beat an industry-wide sales decline.

Firms like Huawei and Honor are developing operating systems that connect their own smartphones, tablets, laptops, TVs, headsets and other devices, including virtual reality gadgets and intelligent cars.

Huawei released its latest HarmonyOS 3 on Wednesday after 300 million HarmonyOS devices had hit the market by July. The upgraded Huawei-developed system offers better sync and interaction experiences to consumers over 12 product categories, including printers and cars.

"The HarmonyOS operating system has the widest coverage of devices in history," said Richard Yu, head of the Huawei Terminal business unit.

The system is a powerful alternative to Android and iOS and reaches out to a wider range of devices.

HarmonyOS 3, available for download in September, offers features such as remote control of a car by smartphone, and has additional privacy protection that restricts an app's ability to access private data. This is also included in the latest iPhone iOS update.

Honor, the No. 2 smartphone brand in China in Q2, has released new products all based on its Magic OS system.

"Honor now offers a distinction from the traditional design that limits a single product to a single scenario by serving multiple scenarios with a combination of products," said Zhao Ming, Honor's president.

In the second quarter, Honor ranked No. 2 in the Chinese smartphone market with 18.3 percent, following market leader Vivo at 19.8 percent. Oppo, Apple, Xiaomi and Huawei make up the ranking positions, according to research by Counterpoint.

The whole market experienced a sales slump in 2022, providing challenges to all smartphone brands.

According to Counterpoint, Chinese smartphone sales declined 14 percent in the second quarter, the worst since 2012.

Therefore, leading brands, including Huawei, Honor and Xiaomi, have set out to develop their non-smartphone business and systems to better connect a range of devices.

Honor plans to expand into virtual reality devices in the future. It will launch policies for developers to access the Magic OS technology in both domestic and overseas markets, Zhao added.