A high school in Hangzhou has introduced a facial recognition system in its classroom to increase engagement and facilitate teaching administration.

The “smart classroom behavioral analysis system” has been on trial in two Year 10 classes at Hangzhou No. 11 High School since March this year. It belongs to the smart campus system that the school launched in 2017.

The smart campus system is being applied in several locations including the use of facial recognition in the campus canteen, classrooms, vending machines and library. A speech recognition system has also been introduced so it can translate a teacher’s speech into text for those who are not able to take notes in class.

In an open day event held at the school on May 15, vice president of the school, Zhang Guanchao, gave a demonstration on how the system worked to education professionals and several tech companies.

The three cameras, installed at the front of the classroom, scanned the room every 30 seconds to capture students’ facial features and behavior. The system camera identifies the faces of each student and registers class attendance within seconds on a terminal open to the lecturers. 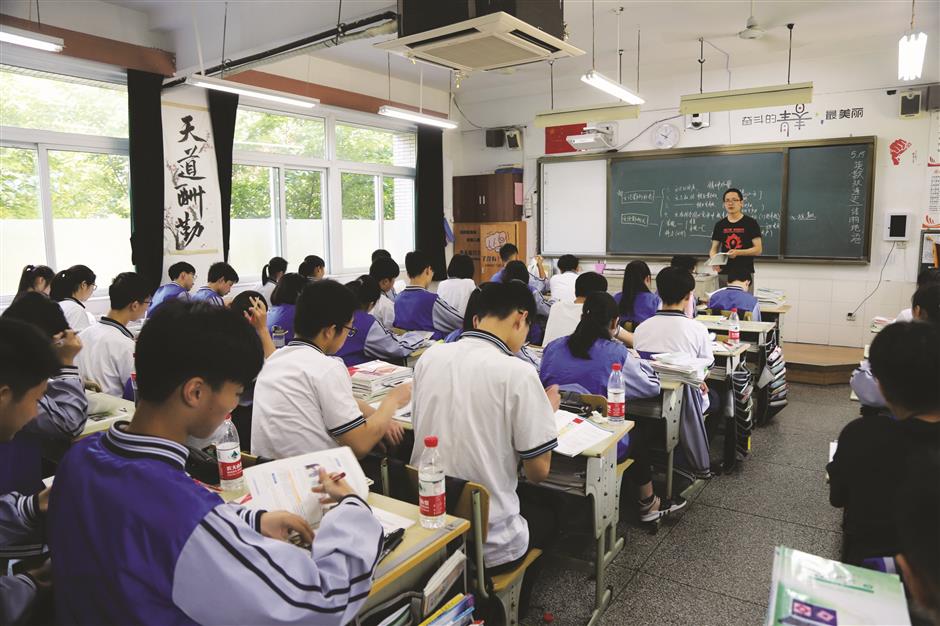 Students in a classroom equipped with a surveillance camera at Hangzhou No. 11 High School

The smart system also tracked down students’ performance in class, such as reading, writing, listening, and behaviors such as raising hands, standing up or leaning on a desk. It also collects their facial expressions to see if students are afraid, happy, sad, surprised or angry among others.

The system can use this information to record a curve on the overall attentiveness of the class from analyzing the combined data. And it would further alert the teacher when a student’s performance drops below a level pre-set in the system.

“The main purpose is to facilitate management in class under the condition of a course selection system, where teachers know less about their students than in a fixed cohort,” explained a staff member from the president’s office, who only identified herself as Wang.

She emphasized that it was not a surveillance operation on students and the attentiveness data would not be used for assessing students.

“It is only a reference to our teachers, as they can compare the data between the same course taught by different people, so that they may adjust the way and the content they teach in class,” added Wang.

Zhang, the vice president, moved to allay public fears over an intrusion of privacy and said they would not record facial images of students, only codes and data were collected and reflected.

He also pointed out that data would not be saved on any cloud servers. The analytics were only accessible to course instructors, mid-level management staff and top administrators of the school, with different levels of permission to the system. 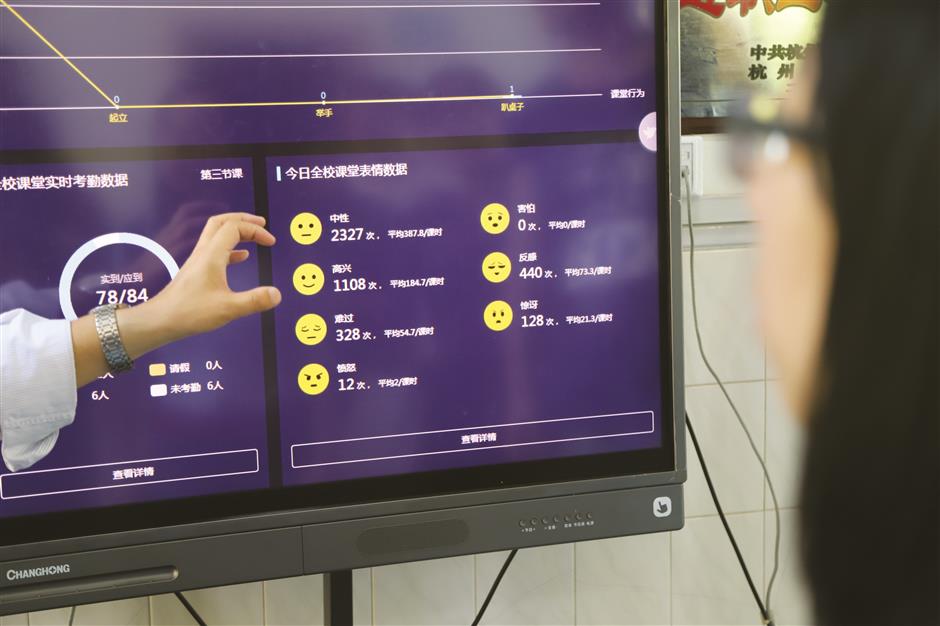 A teacher monitors students' facial expressions in class by the surveillance system to see if they are afraid, happy, sad, surprised or angry among others.

It is not the first time that facial biometrics have been used in education in China. In 2016, Wei Xiaoyong, a professor in computer science at Sichuan University in southwest China, developed a program to read emotions of his students attending lectures.

But other than showing the overall attentiveness curve, his tool displayed the curve of each student, which could indicate precisely at which point the level of interest began to decline or rise.

His use of facial recognition in registering attendance was even earlier, dating back to 2011.

Wei told the media the real value of such a system was in its data mining. With effective data collected through the system, researchers of sociological, educational or psychological backgrounds would be able to verify certain assumptions that might improve students’ academic performance and promote personalized teaching.

In 2016, the IE Business School in Madrid, Spain launched the WOW (Window on the World) Room in their online MBA programs. It made mobile learning and teaching possible by projecting the lecturer in hologram and joining students live online from all corners of the world.

The emotion recognition system was employed as a means of monitoring student participation via the cameras on learners’ tablets or mobile phones.

“Facial recognition is an established technology today. It has gone through development for more than 50 years,” said Chen Xi, a professor from the School of Management, Zhejiang University.

Chen said a facial recognition system based on deep learning could reach an accuracy of 99 percent.

“The issue of privacy is not just a problem of the technology. It depends on the people who use it and how they use it,” added Chen, who suggested the system should not be targeted on a specific person and possible data leaking should be considered in its design.

Hangzhou Bureau of Education started the construction of the smart campus among member schools in 2015. To date, 190 schools, including kindergartens, primary and middle schools, have been selected as demonstration schools for their use of smart technologies.

Since 2018, the Hangzhou No. 11 High School and Hangzhou No. 14 High School have been using facial recognition in checking students’ daily attendance. No.11 School is the only one to endorse the emotion reading and behavioral analysis in class.

In a written reply to Shanghai Daily, Hangzhou Educational Technology Center, which supervises the informatization work of the primary and secondary schools, said that the new technology will not be officially adopted and promoted before a proper assessment procedure is taken, including the relevant authorities soliciting public opinions. 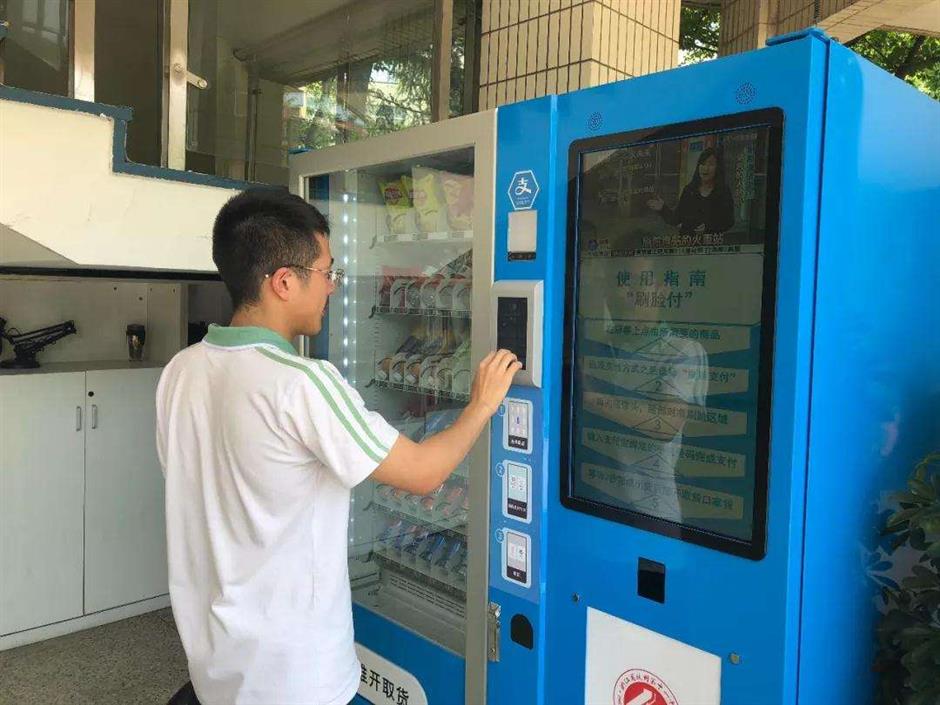 A student buys things from a vending machine by using facial recognition technology at Hangzhou No.11 High School.