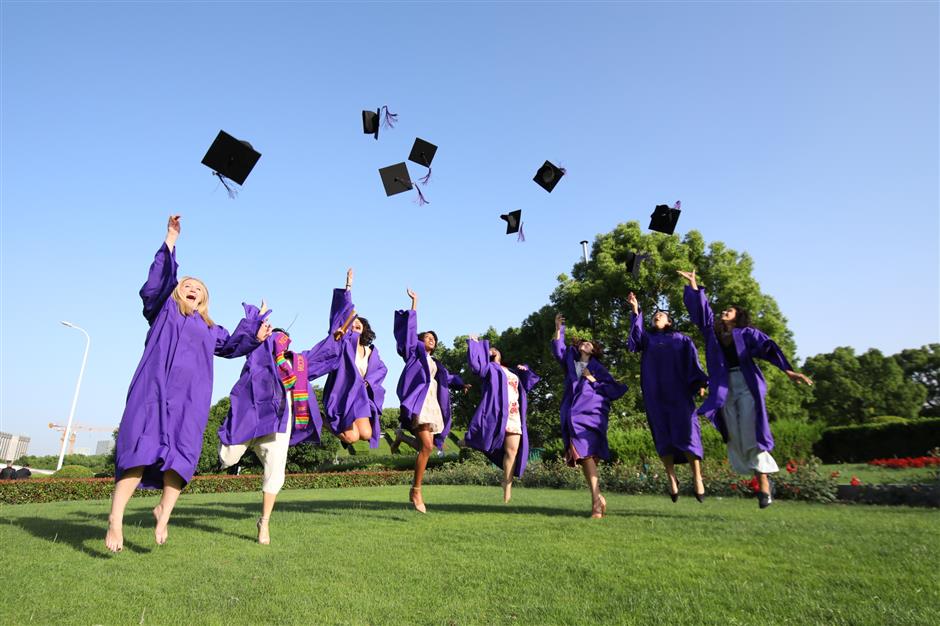 The class of 2018, which included 265 students from 35 countries, 134 of them Chinese scholars, is the second group of NYU Shanghai graduates to pass with flying colors, after last year’s class.

Some of them have already landed jobs in top-flight companies and intergovernmental organizations, such as Amazon, Alibaba, Bank of America Merrill Lynch, IBM, L’Oreal, Morgan Stanley, Standard Chartered and Tencent, while others have earned coveted postgraduate scholarships, including one Schwarzman and two Yenching scholars. But some foreign graduates are intending stay in China after graduation.

Greece-born Louis Demetroulakos graduated a year ahead of schedule and will work for Hellas Group of Companies as a business development manager, splitting his time between Shanghai and Athens.

“I will be working to bridge two of the world's most ancient civilizations together with gastronomy and hospitality,” said the Global China Studies major from Boston of America.

He used to dig up pieces of porcelain in his backyard when he was around 5 years old, which he believed were from China. His interest in China deepened during high school, where he took a Chinese history class, which ultimately led him to apply to his dream school, NYU Shanghai.

“I hadn’t told my parents, so the acceptance letter came as a surprise to them,” Demetroulakos said. “They were worried about me moving so far away, but I had prepared a 3,000-word essay for them explaining why I really wanted to make this move and why I thought I should be here.”

Demetroulakos chose to major in Global China Studies and admitted it has changed his perspective and given him a good toolkit to look critically at different situations.

“I love learning how past traditions in China can influence how people behave today in business situations,” he said. “It has made me much more sensitive to the people that I'm working with.”

The combination of in-depth local business knowledge and cross-cultural awareness has helped him stand out in applying for jobs.

“NYU Shanghai has equipped me with the cross-cultural tools to navigate the global workplace,” Demetroulakos said. “I say with all certainty, that NYU Shanghai is the best decision I've made in my life.”

Another NYU graduate Nofar Hamrany was named a 2019 Schwarzman Scholar, an honor that will support her further study for a master’s degree at Tsinghua University in Beijing.

The 25-year-old Israeli, who majored in economics and minored in Chinese language, became interested in China and political leadership when she was serving in the Foreign Relations Division of the Israel Defense Forces between 2011 and 2013, responsible for coordinating military activities with foreign forces to resolve incidents along the Israeli-Egyptian border.

“During my military training, I learned about China’s role in the Middle East and its growing relations with Israel,” she said. “I wanted to understand more about this rising global leader. That’s why I chose to attend NYU Shanghai and I am looking forward to learning more as a Schwarzman Scholar.”

She aims to bring questions of scarcity, international relations and technological innovation to the forefront of conflict resolution and security efforts in the Middle East research. She plans to continue this on the Schwarzman program at Tsinghua University.

Two other graduates, Zoe Jordan and Amit Gal-Or, have been selected as the 2018 Yenching Scholars, an award that supports outstanding young scholars to pursue an interdisciplinary Master’s program in China Studies at Peking University.

This September they will join 120 scholars from around the world in the fully-funded residential program to examine China’s past, present and future from both Chinese and international perspectives, with a particular emphasis on China’s development and role in the world.