Duke Kunshan University, a Sino-American university jointly set up by Duke University in America, Wuhan University in China and the city of Kunshan in Jiangsu Province, hosted a convocation for its first cohort of 266 undergraduates on August 14.

The students include 175 from the Chinese mainland, 10 from Taiwan and 81 international students from 26 countries, such as America, UK, France, Italy, New Zealand, South Korea, Serbia, Ethiopia and Pakistan.

“The arrival of the inaugural class of undergraduate students is one of the most memorable events of Duke Kunshan since its establishment in 2013,” said Liu Jingnan, Duke Kunshan’s chancellor. “This comes at the end of a long journey of academic preparations by Duke Kunshan, Duke University, Wuhan University and the Kunshan government.”

“This convocation marks an important moment for Duke and Duke Kunshan: the realization of our goal of building a world-class university in China,” said Duke President Vincent E. Price. “I am particularly proud of the richly diverse and academically accomplished students who will begin their studies at Duke Kunshan this year, the innovative and distinguished faculty, and the many people at Duke, Duke Kunshan, and around the world who have made this visionary idea a reality.”

Duke Kunshan was granted accreditation approval by China’s Ministry of Education in September 2013 and officially opened in 2014 with master’s degree programs. Now with its first class of undergraduates, Duke University becomes the only top 10 university in the United States to establish a joint venture university and offer bachelor’s degrees in China.

The core of Duke Kunshan’s undergraduate education features an integrated and multi-disciplinary curriculum, with an effective blend of Chinese, American and global techniques and values and a culture of academic excellence and freedom.

It draws from the liberal arts tradition of Duke, with students declaring their majors before the end of their second year. Before this, students choose courses from a number of disciplines in order to explore and develop their personal academic interests. Students can choose from a wide variety of curricula, and they have access to field trips and entrepreneurial internships.

They will also undertake their own research projects, all of which will allow the students to delve deeply into their specialized subject.

A total of 15 majors have been approved by the Chinese Ministry of Education, including material science, political economy, environment science and biology, while more majors are under development. By the time the inaugural class of students have to declare their majors, it is hoped there will be about 20 majors at Duke Kunshan.

On graduation, the students will receive a Duke degree and also a degree from Duke Kunshan University, which is approved by China’s Ministry of Education.

Teaching the undergraduates will be 22 new faculty members hired from an initial pool of 1,300 applicants from around the world. In addition, 11 members of the Duke faculty will also teach the undergraduates this year. The faculty was directly involved in the creation of an interdisciplinary curriculum designed to address real-world issues from a variety of academic perspectives.

Future plans call for more than doubling the size of the campus, increasing the class size to 500 students and employing 120 faculty by 2021. 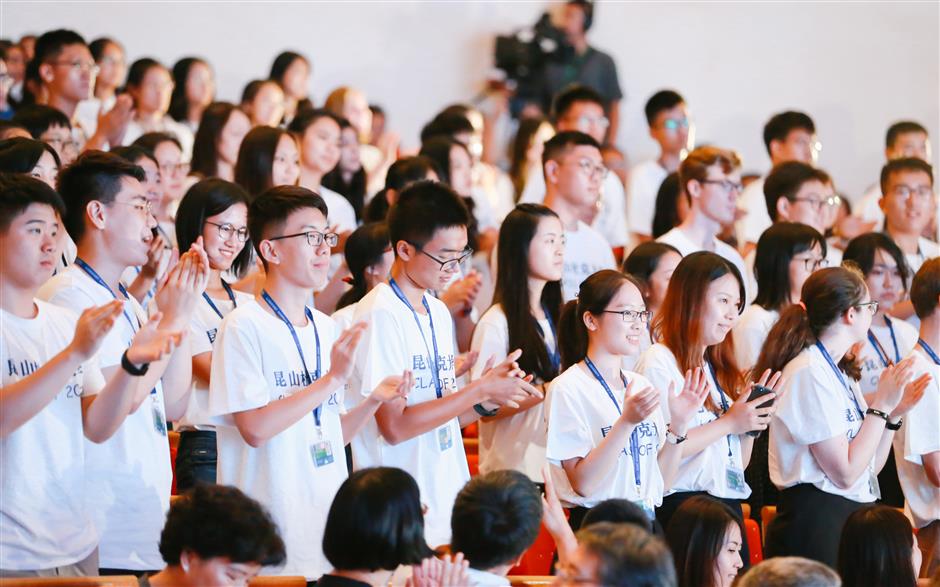 The students of Class 2022 are also excited to begin their study at Duke Kunshan.

Spencer Reeves, from New Canaan, Connecticut in the United States, said he chose to study at Duke Kunshan because he wanted to receive a world-class education, and also wanted to be educated by the world.

“The 27 countries from which we come are all so different, I can only imagine the great things that can come from this,” said Reeves. “We are not only going to learn from the terrific faculty here, but also from one another – about culture, history, language, food, and much more. Without a doubt, everyone in this class will go on to do great things for the world that we share.”

Reeves started to take Duke Kunshan as an option for his undergraduate study plan in 2014 when he was at his mother’s Duke reunion in North Carolina. He bought a T-shirt at the store — a shirt for the Global Learning Semester.

“The logo on the shirt shows Duke Kunshan at the center of a compass, a great ancient Chinese invention, an intersection of schools and cultures. The tagline on the shirt reads: Chart Your Course,” he said.

Cao Mingfeng, a student from Shanghai, said he treated Duke Kunshan as a transitional platform between China and the international environment which he was not quite familiar with yet.

“And I’m interested in bio-medicine, in which Duke is very strong, so I’m really looking forward to the future study here,” he said.

Zhou Xudong, acting mayor of Kunshan, said the first class of undergraduate students were of milestone significance for the development of the university.

He said Kunshan would build a national first-class industrial science and technology innovation center with international influence in which Duke Kunshan University will play an important role as the core area.