That English learning should not be exam-oriented is perhaps agreed by most parents. Parents would not like to see their children who memorize vocabulary, learn grammar and do tests lack the ability to appreciate original English books, watch English cartoons or communicate with native speakers.

Judi Paul, founder of US online education company Renaissance Learning, developed its K12 reading software in 1984 to help her child. The software turned out to be a success and became a commercial proposition. By 2014 the company had clients across a third of US schools and about 60 countries around the world.

Leveled reading guided by Renaissance’s Accelerated Reader quiz and its Star Assessment test is popular with young English learners in China. Among its promoters are librarians, teachers, educators and parents. Here’s what some of them have to say. 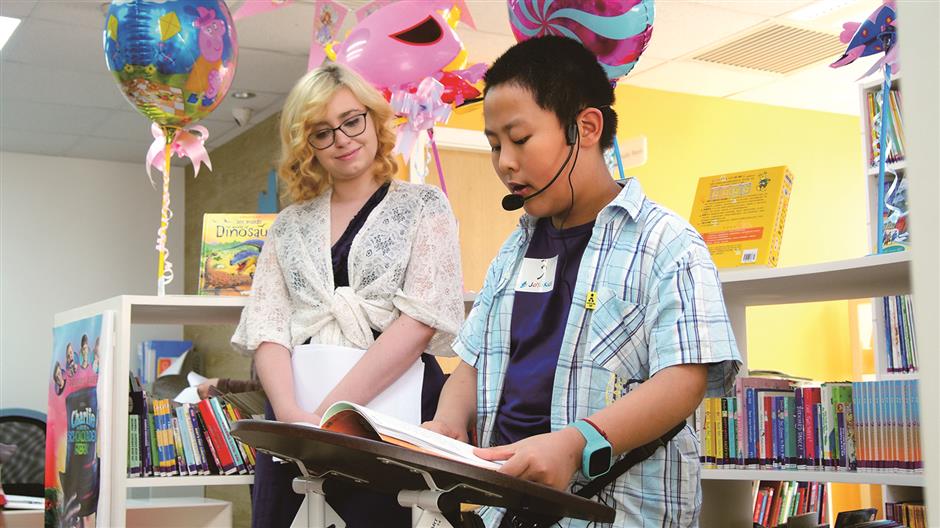 Zhang Li, a former aerospace engineer and now a full-time housewife, opened her family library to the public in 2014. Her Nebular Children’s Library has a collection of 14,000 English books, among which 4,000 are leveled according to Renaissance’s Accelerated Reader categorization. The borrowing service has expanded beyond Shanghai to the Yangtze River Delta region.

Zhang, who has two children, has been collecting books since her first son was born 12 years ago. Like many Chinese parents who have high expectations for their children, she bought picture books and reading material for her newborn.

Her collection grew to include picture books, leveled readings and thick original novels, comics, dictionaries and audiobooks. It turned out that her collection was so abundant and carefully selected that it was better than many of the domestic children’s libraries she had visited.

Motivated by that fact and eager to introduce good books to other parents, Zhang and her family categorized all the books they had and gave them covers marked with reading levels.

“Reading becomes difficult when parents don’t know how to judge the outcome. But AR solved the problem by categorizing books according to their difficulty and reflecting children’s reading outcomes in numbers,” said Zhang.

Running a library was difficult. Sometimes Zhang would end up in the red. Packaging alone cost tens of thousands of yuan. To ensure hygiene, Zhang and her family disinfect each returned book and have already worn out one sterilizing cabinet.

Her efforts paid off since not only her own children but those using her library all developed an interest in reading. One child member has borrowed nearly 2,000 books over the past three years.

“Family education plays an important role when children are doing the leveled reading, for few children in China have the advantage of attending a bilingual kindergarten or having a native speaker talking to them around the clock. It largely depends on parents to carry out the reading project. When a child begins to show English listening and speaking abilities, a foreign teacher’s help becomes obvious,” said Zhang.

“To carry out the reading plan, parents also need to be persistent,” she added.

The boy, a student from a public primary school in Shanghai, started to study English at the age of 5. At 6 he could listen and read English books. Around 7 or 8 he had no problems communicating in English. 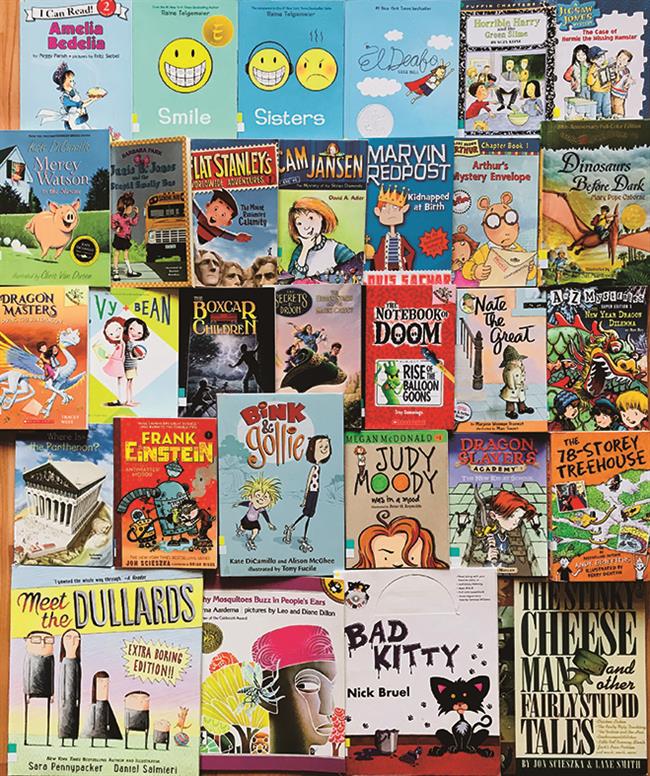 Part of the book collection from Nebular Children’s Library

By the time he was 9 he had finished reading JK Rowling’s “Harry Potter” series. At Grade 4 he gained a Renaissance Learning Grade Equivalent reading score of 9.7, which means a reading ability equivalent to that of a native speaker in the seventh month of 9th grade.

“I help my son achieve this by letting him read original English leveled readings. All the money parents often spend in sending their children to English training schools was spent by me in buying children’s English books,” said Huang.

“In 2011 when Enoch was 5 years old, channels to acquire original children’s English books were quite limited. I could only buy them online from other countries. Sellers put books into boxes and sold them at certain price per box, giving us buyers no selection choice. Or I bought books personally when I visited other countries. My suitcases were filled with children’s books instead of brand-name cosmetics,” Huang said.

Then Huang met Kerren Zhang, a mother using the same English study method through reading leveled books, and the two founded the Shanghai Joyokids Children’s English Library with 3,500 English books they had in July 2014. The number of the books in the library had expanded to over 22,000 by the end of last year.

“Kerren’s English is very good, while I represent most Chinese parents with limited English ability. I succeeded in my child’s English education. So the way of learning English through reading original leveled books can be applied in other families,” said Huang.

She says even a mother with limited spoken English ability and imperfect pronunciation can teach her children English.

“No English teaching expert will spend the same effort on a child as his/her mother is willing to. And no English teaching expert will understand so thoroughly about a child as his/her mother knows about him/her,” said Huang. “Besides, children are way smarter than you think they are. As long as a child doesn’t only listen to his mother speaking English, he will always pick the best pronunciation he hears around him. That’s a child’s talent.”

“We recommend children read books under the same topic or subject at one time. Traditional English training schools would teach their students one lesson on animal sounds and the next lesson on a totally different subject. But that way of language learning is not effective,” said Huang. “Different children have different interests in reading. For a child who is growing his permanent teeth, a parent may choose a book on tooth changes. For a girl who likes princess stories, a parent may choose books on princesses.”

Joyokids awards “Millionaire Certificates” to its readers every year. Children who read one million words of original English books will receive a certificate at the end of the year.

The founders of Athena Academic English established the institute because of a successful library program at HD Ningbo School, Elite K12 Education’s first bilingual school in China, in 2014.

The program helped newly enrolled HD students improve their academic English skills in three to six months. Parents living in the community, though their children hadn’t attended the school yet, wanted to share the library resources. The school authority agreed. But more and more families came and their resources gradually failed to meet the need. So the school thought about establishing more community libraries. Hence the Athena Academic English Learning Center came into being.

Ding said the focus of the library-turned English learning center is still thrown on the students, with teachers playing the role of guides, inspirers and monitors. 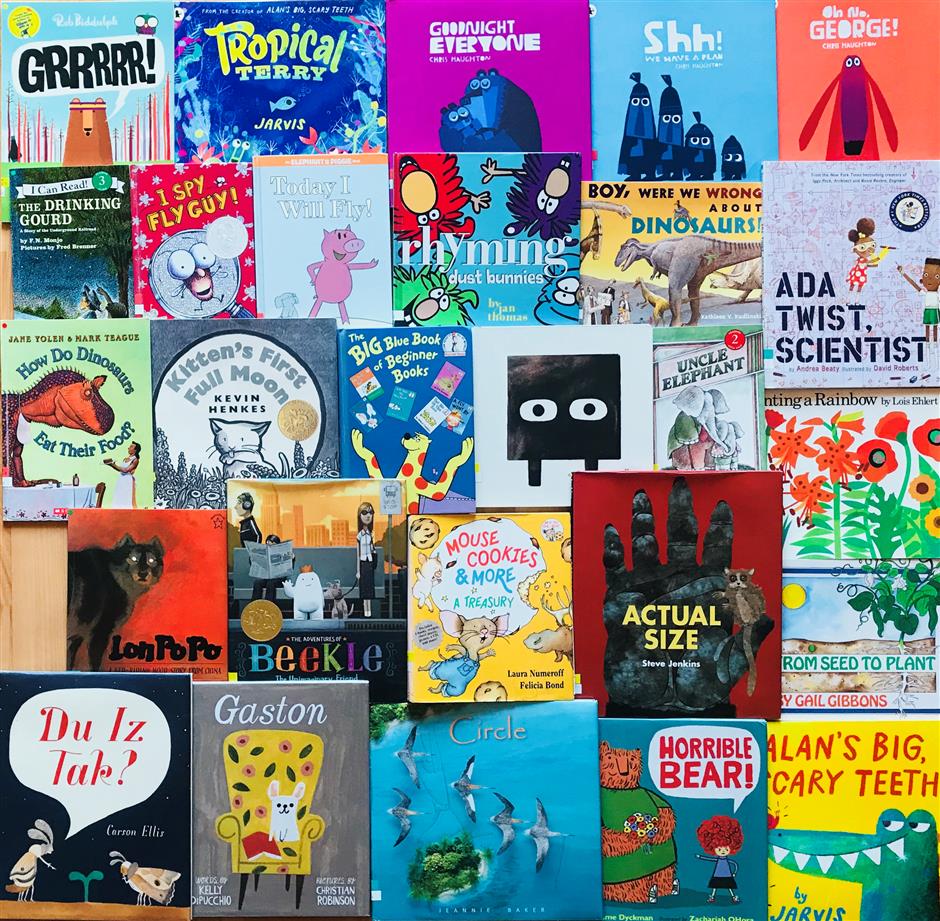 Part of the book collection from Nebular Children’s Library

“Teachers guide students to pick books according to their different reading levels. They encourage them to read diversely and bravely. Teachers also group students with roughly same reading levels into one class. Each lesson will focus on one reading skill or strategy, so students can then apply it when reading independently. Teachers will also interview students to check their understanding of books they read and ask critical thinking questions to develop their high order thinking skills,” said Ding.

The center provides students with a collection of over 5,000 books organized by genre and reading difficulty.

Luo Dingding has a 19-year-old son who is at the University of British Columbia in Canada. Though excellent in spoken English, he had problems with reading and writing when he was a senior high student. The problems persisted after he went abroad. Luo learned from her son’s experience that being good at spoken English alone is not enough, and reading and writing are perhaps the biggest challenges facing Chinese students wanting to study abroad, so she decided to sent her 8-year-old daughter Elaine there.

“Elaine felt happy every time she came to study here. What’s more, to write a book report of hundreds of words is now a piece of cake for her,” said Luo.

“We just hope our children will no longer struggle to learn English, but instead acquire English and an unfamiliar culture naturally through reading. They will become people who are able to communicate and cooperate cross-culturally,” said Jasper Pan, CEO of Athena Academic English.