Former Chinese gymnast and now an entrepreneur Li Ning recently spoke about how “sports make anything possible” at the Shanghai University of Sport.

In fact, “Anything is possible” is the slogan of the sportswear company named after him.

Li shared his experience of his transformation from an Olympic champion to a successful entrepreneur following China’s reform and opening-up policy.

Born in 1963, Li started practicing gymnastics from the age of 8. He is the only athlete in gymnastics with more than 100 gold medals from various events.

In the 6th World Cup Gymnastics Competition in 1982, Li won six out of the seven men’s gold medals on offer and came to be known as “the Prince of Gymnastics.”

He also won six medals, three golds, two silvers and one bronze at the 1984 Summer Olympics in Los Angeles, which was the first Olympics in which the People's Republic of China participated.

With expectations high from the public, Li went to the Seoul Olympics in 1988 but returned empty-handed after making crucial mistakes. It later came to light that he was struggling with injuries but that was not enough to satisfy his legions of fans, some of whom sent him bullets, ropes and blades after the event. 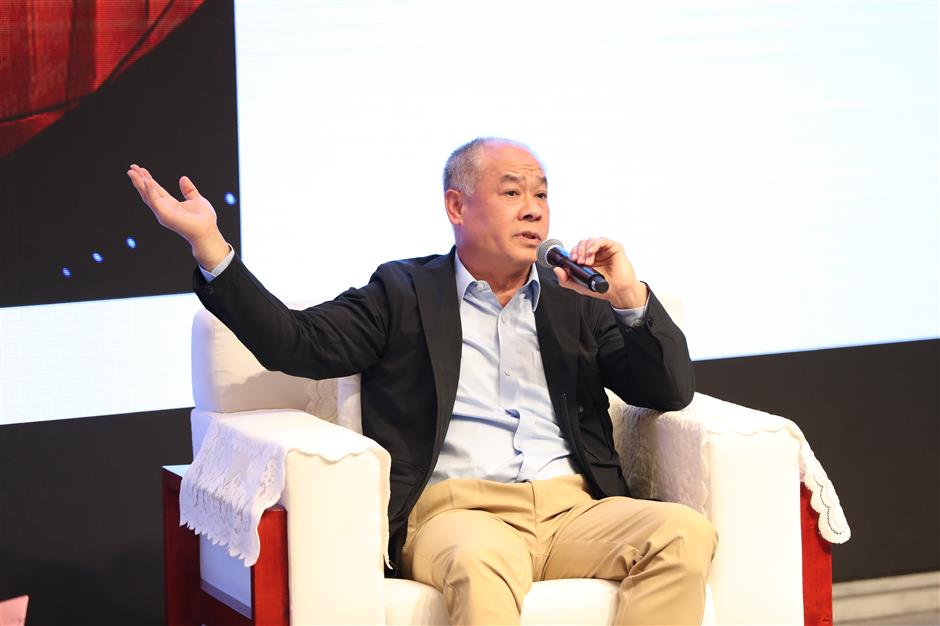 Former Chinese gymnast and entrepreneur Li Ning recently delivered a talk on “sports make anything possible” at the Shanghai University of Sport.

“Of course I was upset at that time because I was the captain of the Chinese gymnastics team and it was the biggest failure for China in the competition since we returned to the Olympics,” he said. “But it was a natural decision to retire because a competitive sport is closely related to age and form. When you are off-form, it’s natural to retire and there will be new champions soon. Actually, the failure made me a stronger man.”

Li said he planned to open gymnastics schools but it needed money, so he joined in Jianlibao Group, a soft drink producer, and later founded a sportswear company in 1990, which he named after himself. It was said that was an effective way to save advertising costs.

The company also supports him in running sports schools and related facilities all over the country.

Li remains chairman of the company's board of directors. “Li Ning” is now a famous brand in China. He was ranked as the 789th richest person in China by Hurun Report last year with an estimated fortune of 5 billion yuan.

Li also was the first Chinese to be inducted into the International Gymnastics Hall of Fame in 2000.

In 2008, he lit the torch at the opening ceremony of the Summer Olympics in Beijing after being hoisted high in the air with cables around the rim of the stadium. He was back in limelight again.

Looking back at the past 40-odd years, Li said that it was China’s reform and opening-up that brought back the spirit of competition, both in sports and business, and make it possible for him to be a successful athlete and a successful businessman.

“In the same way, only after the opening of the economy in 1978, the market competition and the establishment of ‘Li Ning’ was possible, and the development of the enterprise was achieved with competition playing a key role,” he added.

“Competition is always necessary because only in a competitive environment can you realize your dreams. Of course, it should be a healthy competition instead of a vicious competition. It should push the other competitor to improve itself.”

Li sees sports as his dream and is committed to extending its influence to the development of China. To him, a sport with strict rules allows everyone to compete fairly and help accelerate the pace of development.

“I think sports is a way of education and indoctrination as it teaches us to accept rules, to respect the opponents, to take the defeats, and to communicate with others, which cannot be learned merely in class but are of critical importance to the younger generation,” he said.

Li hopes that his brand can instill a sense of optimism and perseverance in the younger generation.

However, doing business is not as simple. Li revealed that his company suffered more than 3 billion yuan in losses about six years ago due to a lack of unique products.

He used to be only responsible for planning, instead of the daily operation of the company. But the loss pushed him to take charge as the chief executive, which meant he had to learn all business operation skills and lead the company back in the black.

“It is time for us to reposition our business model, transform our products, and seek new business ideas,” Li said. “Today, we are still innovating our products and the industry. We now no longer treat sports as sports only. It’s a kind of fashion and a necessary supplement to life.”

In order to cater to the preferences and aesthetics of young people, Li altered his business strategies.

“The idea of ‘young,' in fact, changes along with the progress of the times, development of economy and advances in technology,” Li pointed out. “As a sports brand, we are constantly pursuing innovation.”

“You may not be able to succeed all the time, but as long as you try, the experience is valuable and helps you to grow up,” he said. “Anyway, sports can always give you the passion and energy and makes anything possible.”

Former Chinese gymnast and entrepreneur Li Ning interacts with students after delivering a talk on “sports make anything possible.”