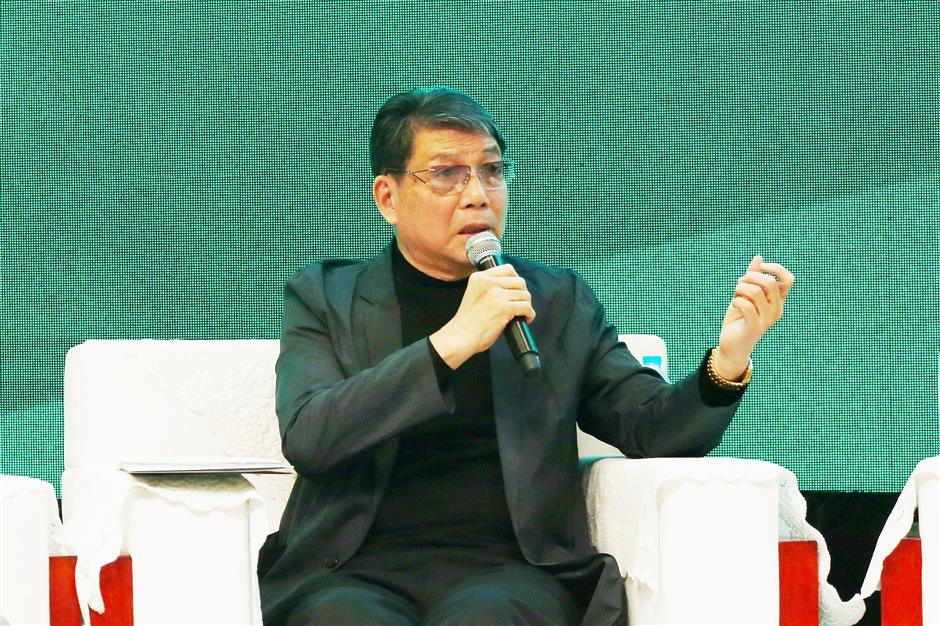 Veteran soccer coach Xu Genbao talks to students at Shanghai University of Sport about his long career in the sport.

Veteran soccer coach Xu Genbao, along with Shanghai SIPG players Wang Shenchao, Cai Huikang and Lu Wenjun, were recently invited to Shanghai University of Sport to talk about their success in the 2018 Chinese Super League, where they ended Guangzhou Evergrande's monopoly since 2011.

Xu, 75, was a national team coach from 1966 to 1975 and coached Shanghai Shenhua and Dalian Wanda in the 1990s, leading both teams to the Jia-A League championship.

He established the Genbao football base on Shanghai’s Chongming Island in 2000 to train young players, aiming to build "a Manchester United of China.”

In 2005, he established the Shanghai East Asia football club in cooperation with Shanghai Dongya Sports and Culture Center Co. The club won promotion to China League One in 2008 and to the Chinese Super League in 2013. He sold the club to Shanghai International Port Group in 2014 and a U-19 team to Shanghai Greenland Shenhua.

Shanghai SIPG were crowned Chinese Super League champions at Shanghai Stadium in November, and Wu Lei, the CSL’s top scorer, was named Player of the Year.

Xu said he was glad to see students of his academy achieving success, but what couldn’t be forgotten was what was behind the victory — tough training but a happy life together with the young players over the past 18 years.

He told the students why he established his football academy.

“I was watching a match between China and Japan in 1999,” he said. “Although it was a 1-2 loss, there was huge gap between our team and the Japanese team. So I decided to help China cultivate football stars at that moment in 10 years.”

The Chongming government agreed the use of a piece of land for 15 years, but he had only 8 million yuan (US$1 million), which wasn’t enough to build up a football base, so he took out a 23 million yuan loan.

“I don’t know what I was thinking because it meant I had to pay 1.36 million yuan in interest every year, a huge burden for me,” he said. “Fortunately, we also built a hotel, which could support the operation of the football base.”

He said the current youth football training system that hired coaches from different countries for children of different age groups may not be a scientific or wise decision.

“Different countries have different training models and I think it is better to have coherent ideas in all age groups,” he said.

Xu also said that although his team had made great achievements in China, the national team’s performance was not yet good enough. However, he believes that one day China can gain a foothold in Asian soccer and even the World Cup. He’s hoping his students will take over his duties and cultivate more talent to revitalize soccer in China.