Shanghai Community International School Pudong class of 2019 senior, Victor Veloso, has made SCIS history by being the first student to be offered a spot in a National Collegiate Athletic Association Division II athletics program. Following in the footsteps of fellow SCIS graduate, Simon Wu (SCIS PD ’18), Victor is the second student-athlete in a row at SCIS to be signed by a divisionally ranked NCAA soccer team in the United States.

Upon graduation, Veloso is set to travel to California and join Notre Dame de Namur’s soccer team, the Argonauts. We talk with him about his perseverance to follow his passion and future plan. 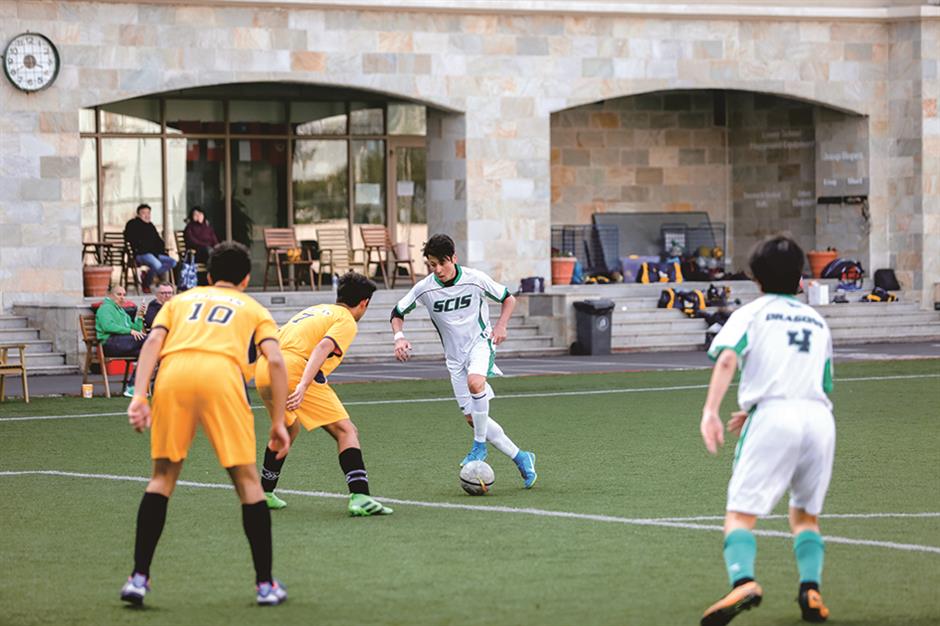 Q: How many schools did you reach out to in total?

A: I sent out 947 emails, not to 947 schools but I had to introduce myself many times to each school to prove that I am a good fit for them so I tried to talk to as many schools as I could.

Q: So, in the end, you decided to sign with Notre Dame de Namur University?

A: Yes, it’s a really good DII school and they reached out to me very fast. They were very straight to the point, let me know everything I had to do to be part of the team and to be part of the university. They accepted me and came up with a scholarship offer through the video I sent them, which was a little surprising for me and coach Vic. Every other school I contacted wanted me to travel to their school so they could see me play.

Q: How long have you been playing soccer?

A: I’ve been playing since I was a kid, but not solely focusing on soccer alone. Around 8 or 9 years old, I started focusing my attention on soccer. I played in youth academies and sports teams in the hope that it would take me to a better place. When I moved to Shanghai, I started playing with the school here at SCIS and I also join a local club in the city, playing alongside adults.

Q: Looking back, what would you say was the most challenging part of the whole process?

A: Having to introduce myself to universities as an international player was really hard because the only things they could see was my resume and video. A video is really easy to make and to make yourself look good and so it was difficult to prove myself to these universities and convince them that I would be a good fit for their program.

Q: You brought up SCIS as playing a role in the application process, how much did SCIS help?

A: First of all, SCIS introduced me to how the whole application process was like. They helped with setting up an account with the NCAA clearinghouse to be eligible as a student-athlete. They helped prepare me with how I should be approaching universities. Also, having Wu (SCIS Pudong Class of 2018) doing the same thing I’m doing right now and playing at the college level helped me see what I should and shouldn’t be doing.

Q: From an academic perspective, I’ve witnessed the growth in you over the time you’ve been here, with soccer as a driver, how did it impact your academics in the classroom?

A: Coming from Brazil, with the English I had, SCIS was a bit challenging to start with, especially getting good grades and being together with everyone. So, the first months were a bit of a struggle, but as soon as I made up my mind to follow the university path I decided to focus more and to give everything I could. So, I tried my best to be better inside and outside of school, in sports and in life. SCIS helped me develop my English skills, which are much better today than they were before.

Q: What position are you hoping to play?

A: As I reached out to the school, I told them the positions I play here: right winger (forward) or a left back (defender) because of my left foot, and also a right midfielder. I would prefer to play in my original position, as a forward, but I’m willing to play anywhere they ask me to play.

Q: You mentioned camps and 900 plus e-mails, can you give us an approximate number of how many schools you contacted and how many sports camps you attended?

A: The campus I went to were mainly to know about the schools, I didn’t focus on just “I want to go to that school, so I’m going to that camp for that.” I wanted to know about the application process, how the athletes were and how the world was there. I went to three camps in Chicago, Pennsylvania and California. It helped me a lot to get a better understanding of how the university world works and to see as many schools as I could because other schools were visiting the camps. I was able to talk to a lot of coaches and understand better what it is they are excepting from the players.

(The story is contributed by Mikael Masson Perez, marketing and communications officer at SCIS.)