Yellow the color of good parenting for fathers 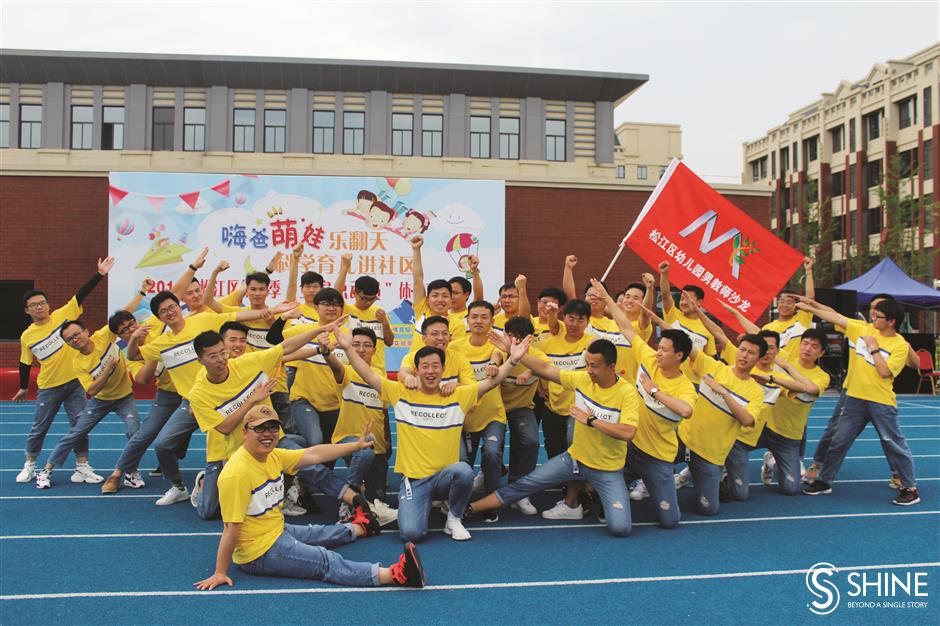 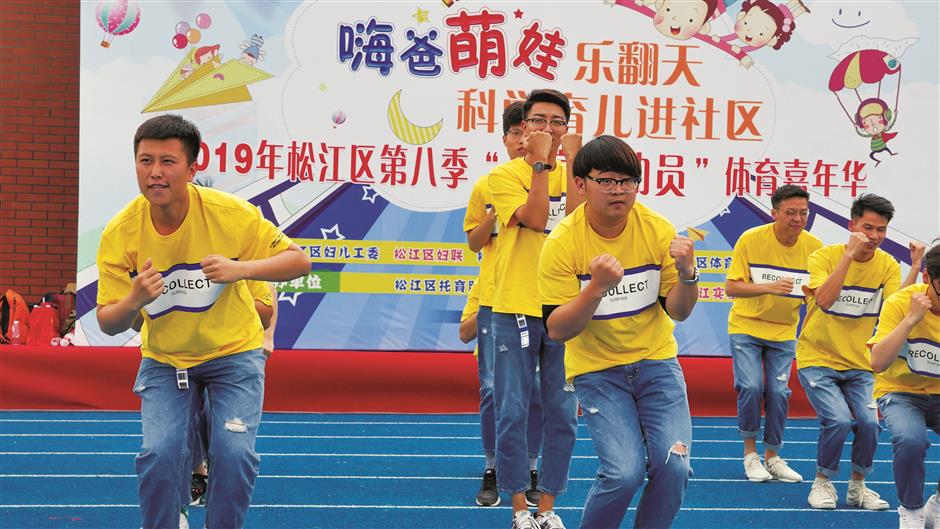 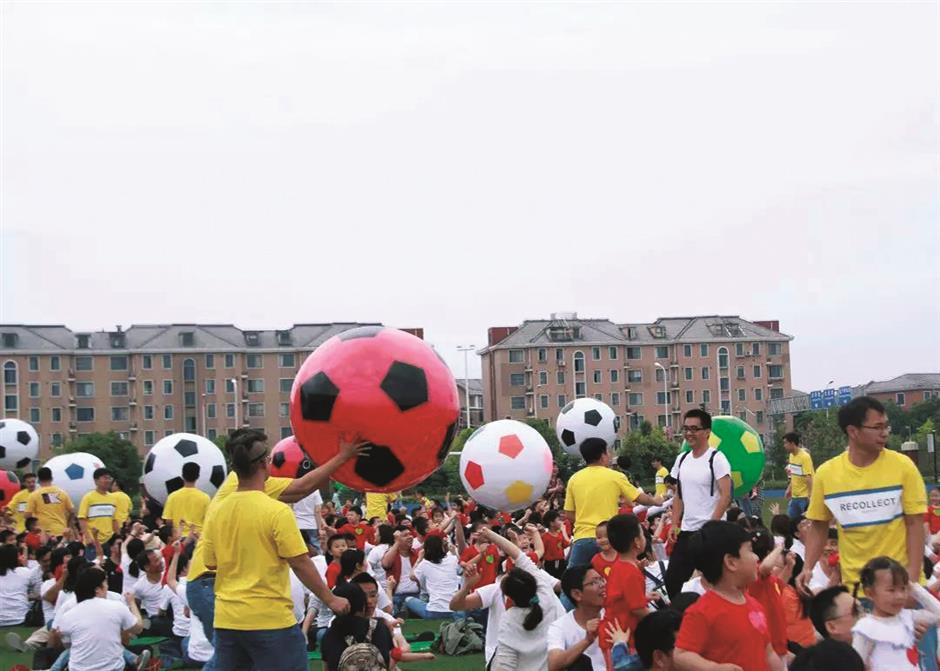 Large beach balls bounced up and down over a sea of excited children and their parents sitting in the playground.

Large beach balls bounced up and down over a sea of excited children and their parents sitting in the playground. A group of young men in their 20s or 30s, wearing yellow T-shirts and blue jeans, stood among the crowd. As they caught the balls and threw them higher toward the sky, cheers reached a new high.

The young men were members of the Songjiang Male Kindergarten Teachers Association engaging families in activities aimed at raising the awareness of the role of fathers in parenting and early childhood education.

When Li Qing, a 37-year-old senior member of the association, arrived in Songjiang to begin his career as a teacher at Dongjing Central Kindergarten in 2006, the number of male kindergarten teachers in the district was in single digits. Now the association, founded in 2012, has more than 40 members.

The district proposed seven or eight years ago that every kindergarten in Songjiang should have at least one male teacher.

“So far in China men play a much less significant role in the upbringing and teaching of preschool children aged between 0 and 6. Fathers are busy with shouldering financial responsibilities of a family, leaving the burden of caring for children to mothers. At school the backbone of preschool education practitioners are female teachers, too. But children who lack a male influence in their preschool years may grow to be less courageous and less curious about the world as female carers tend to be very protective,” said He Linfang, deputy chief of the Preschool Education Department of Songjiang Education Bureau.

The founding of Songjiang Male Kindergarten Teachers Association is also a way to help the teachers themselves.

“Most of the male teachers are from provinces or cities outside Shanghai, their social range tends to be limited within their own kindergartens. In addition, almost all of their colleagues are of the opposite sex, so the boys usually don’t have an emotional outlet to express their feelings. After the founding of the association, our boys are happy as they now have a sense of belonging. You know, between males, they gather and drink beers to handle their frustration; they gather and talk about things delighting them, then the next day a brand-new idea come into their minds. Those are males’ way of dealing with things,” said He.

Xie Wenhui, from Sijing No. 4 Kindergarten, is captain of the team. He cares about his members as the ailment of one member’s mother and the living conditions of another member are all issues that worry him.

“When the association was founded in the second half of 2012, we had 23 members and we held activities together, usually about how to launch sports activities for children. As the team expanded with more male teachers joining in preschool education, we divided the team into several groups according to group members’ different interests,” said Xie.

Though the male teachers may vary in interests or personalities, what is in common to them is their deep feelings for their young students and the kids’ affection for them.

“We all have this feeling: In kindergarten, our kids treasure us as if we were stars. Especially when a sports activity begins, the kids will wave at you enthusiastically. Some will even come close to you and say ‘hello.’ The reasons: Kindergartens have few male teachers and secondly, the kids really like their male teachers,” said Chen Junwen, 25, from Songjiang University Town Kindergarten.

For 25-year-old Li Dianyuan, who has three years’ teaching experience, his attachment with the children is a promise to dine with them till their graduation day.

“Yesterday was the garden party day for our third-year students. They toured the campus and played games prepared at every classroom. Then they had buffets at a big conference room when all of a sudden a kid said: ‘Mr Li, I would like to dine with you.’ Then every kid I had taught said they wanted to dine with me. I was very much moved and promised them from tomorrow I would dine with them at our own classroom till their graduation day,” said Li from Renle Kindergarten.

Zhou Jie, 28, from Longyuan Kindergarten, recalled the first year after he was recruited as a kindergarten teacher.

“Some parents had concerns. But at the end of the year they said they felt totally trustful toward me and acknowledged my ability in caring for the kids,” said Zhou. “Kids would miss me when I was on an errand away from campus and they would feel exuberant when I was with them.”

The parent-child activities Songjiang authorities launched in the district’s communities and towns through November are an effort to encourage fathers’ participation in parenting and earlier childhood education.

“Fathers’ influence lies in forming children’s braveness, willingness to explore the outside world and good social skills. A father also plays the role of assuring security in a child’s psyche. He dares to play more games when accompanied by his father,”said Zhang, father of a 3-year-old.

“A father is the role model for his children. A boy will learn the masculine attributes from his father, whereas a girl will form her judgment toward males based on her understanding about her father,”said Li Qing.

“No matter in schools or in a family, males help with children’s overall cognition development and a lack of it may cause problems,” said Zhang Yu from Baiyun Kindergarten.

For Chen Junwen, both genders are important. “In a family where both father and mother fulfilled their roles of parenting, a child would develop a more complete thinking pattern. So was his school life. If at school he met both female and male teachers, he would absorb strengths of both genders and grow more comprehensively,” said Chen.

“I would call for fathers to accompany their children effectively. By ‘effective companionship,’ I mean fathers interact and befriend with their children. If you are good at sports, you may play football with your kids. In other words, you use your advantages to spend time with your kids. And of course you need to be more tolerant during the process, as I know mothers can have very high expectations when bringing up children,” said Xie Wenhui.

The male kindergarten teachers association, supported by Songjiang authorities, is holding a series of parent-child activities in communities in the district through November for fathers.