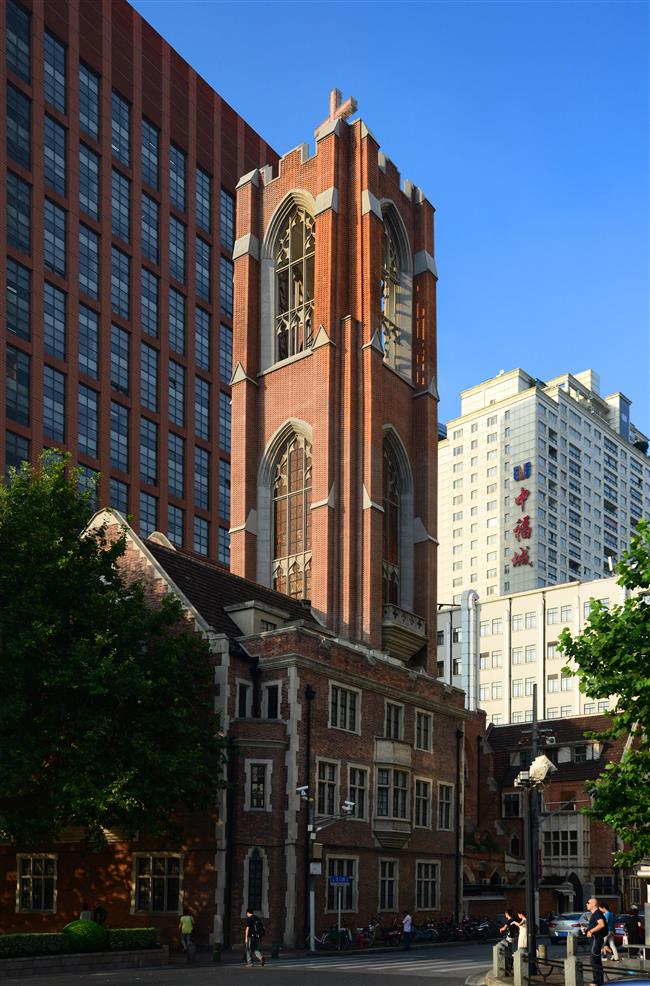 A recent photo of the Moore Memorial Church after a restoration to repair the golden windows and cracks on the facade. Designed by Hudec in 1929, the church has been a landmark at the People’s Square.

The Moore Memorial Church was a “golden church” in the memories of old priests. The pointed arch window was embellished with yellowish stained glass, which reflected vague sunlight even on a cloudy day and thus ensured a mysterious, religious atmosphere of “an always sunny church.”

After a restoration to repair the golden windows and cracks on the fa?ade harmed by neighboring highrises, the church reopened to the public in the spring of 2010.

“Amazed by the revived beautiful church, many Christians burst out in joyful tears at the opening ceremony when 80-year-old architect Zhang Ming was introducing the restoration on the altar,” recalls Zhang Gang, a longtime manager of the church.

This is one of the two surviving local churches designed by Laszlo Hudec. F.L. Hawks Pott’s 1928 book “A Short History of Shanghai” described Shanghai as a center of Protestant missionary work soon after the city opened port in 1843.

“The efforts of the missionaries were exerted in founding churches, schools and hospitals. Naturally as Shanghai developed into the largest and most important treaty port, it became the headquarters of most of the missions carrying on work in China,” Pott wrote.

“It was in this period (around 1930) that Laszlo Hudec received his first commission for churches, more than 15 years after the religious buildings erected in Hungary with his father and at the Siberian prison camp,” says Luca Poncellini, an architectural scholar and author of Hudec’s biography. 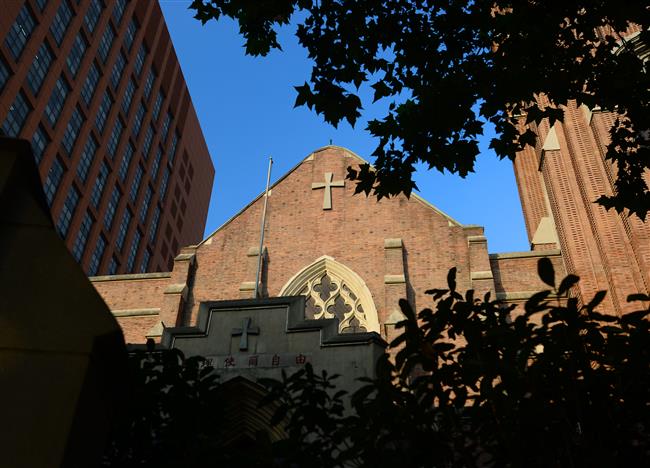 Located at Hankou and Yunnan roads, the church was originally built in 1887 by American missionary C.F. Reid, who belonged to the Southern Methodist Church. It was renamed Moore Memorial Church after American follower J.M. Moore made a large donation to the church in 1890 in memory of his daughter.

The church came to be used as a place for social and informal gatherings in 1917 by stretching its open time. By 1925, the number of followers had increased to more than 1,200 — far too many for the church to handle.

With more donations and fund-raising activities, the construction work for a new church finally kicked off at Xizang and Hankou roads in 1929 on the former site of the Mctyeire School for Girls, where the famous Soong sisters had studied.

Hudec believed in the Lutheran Church. As the chief architect of Shanghai Societas Jesus, he had designed the New German Lutheran Church (now demolished at the site of the current Hilton Shanghai hotel and Hotel Equatorial Shanghai), as well as churches for other religious schools.

Poncellini indicates that Hudec faced a complicated task involving various requirements: A hall with a capacity of 3,000 people was needed for the Eucharistic ceremonies, as was a small ambulatory and an open-air pavilion for concerts and other events.

“Laszlo Hudec’s design introduced here an unusual surface pattern, obtained by setting back or forth some of the bricks layered on the facades, which succeeded in adding some visual dynamism to the wall surfaces,” Poncellini says. “The final plans completed in June 1929 introduced significant changes compared with the first sketches made in 1926.”

The layout was innovative other than the traditional Latin-Cross form for Western churches. It is essentially composed of five parts, including a nave that could house 1,200 people in the center, and four other sections that dealt with issues relating to society, education, management and entertainment in the four corners.

An old building of the former McTyeire School was preserved at the northeast corner. The main entrance was on Xizang Road facing the former Race Course. There were two inner courts inside the church. 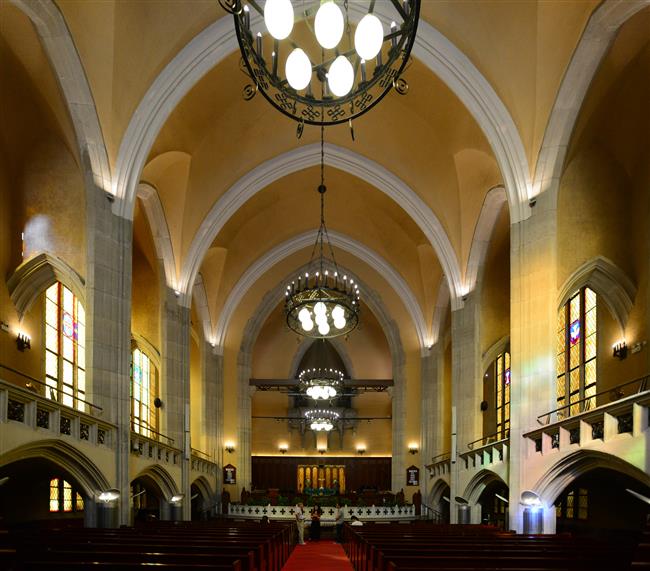 The grand nave of the church can hold 1,200 people in the center with four other sections in the four corners.

Around 1,500 Chinese and foreign followers from as many as 10 nationalities attended the opening ceremony in the spring of 1931. The Shanghai Evening Post said in its review, “The style adopted for the new church is known as Collegiate Gothic, and great care has been taken to preserve the richer traditions of the Old World cathedral architecture although equal pains have been taken to make it thoroughly modern.”

The two-story hall had an open space in the eastern end with exquisitely patterned wooden seats for the choir. Enclosed on the three sides, the seats on the second floor were arranged in a layout similar to a classic Western opera house.

The Gothic vaulted ceilings finished with stone ribbings. The interior walls were in rough amber-colored stucco, and the ceiling of the auditorium was lined with acoustic-celotex sound-proofing panels. It’s noteworthy that the church was entirely fireproof, had a central heating system and other modern sanitary appliances.

Manager Zhang Gang recalls that the church suffered twice severe damage — the first one was when it was used by the Japanese army as a horse stable during China’s War of Resistance Against Japanese Aggression (1937-45) and the other was when it turned into a school’s gymnasium during the “cultural revolution” (1966-76).

“To make room for activities, the original US-made wooden seats had been moved away, whose beautiful pointed arches for decoration had been cut off. We put them back in place now and thanks to the neat cutting, they still look beautiful,” says Zhang, recalling the altar was hanged with Chairman Mao’s portrait during the “cultural revolution.”

The altar, which was also demolished during that period, was revived too, according to a photo donated by a local Christian, who was one of the kids in the chorus in the photo.

“We redesigned and rebuilt the base, architraves and wooden railing of the altar strictly according to original patterns and symbols of Hudec,” says Guo Qiwei, who was architect of the project when he worked for the Shanghai Zhang Ming Architectural Design Firm.

“Despite damage, the church was still in good shape due to its high quality of design and construction. So we just worked on how to preserve it, but added with some innovations,” he says.

“The church was warm in winter and cool in summer before the 1990s, when it was not flanked by high buildings yet,” says manager Zhang, explaining Hudec’s decision not to use air conditioning in the 1930s. “Every priest was assigned a lounge for napping in the nave during summer afternoons. But it was suffocating after high-rises blocked the wind from both sides.” 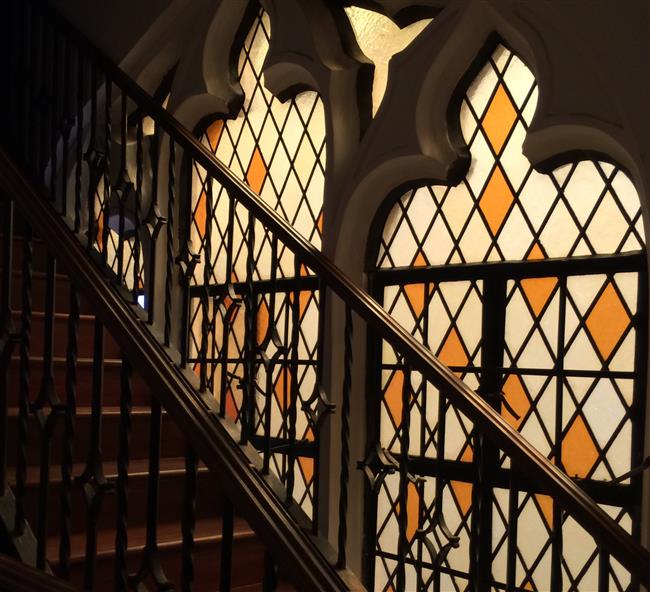 The yellowish stained glass reflects vague sunlight even on a cloudy day and thus creates an always sunny, golden church.

In this restoration, Guo’s team artfully concealed air conditioners inside elegantly designed wooden boxes along the wall. Acoustic panels and an electric organ were also added for a better sound effect.

The facade of the church showed a Collegiate Gothic style with Romanesque manners in some parts. The external walls were adorned with scarlet bricks in a textured pattern, which were repaired by hands with brick powder.

The church boasted a 42.1-meter-tall bell tower, which was one of the highest in the city at that time. The peak of the church was installed with a 5-meter-tall neon-light cross with a motor on its base, which had been a signature of People’s Square.

Architect Zhang Ming designed a crystal cross during the restoration, which can swirl, looks crystal-clear in daytime and glitters with scarlet lights at night, making it a glistening church in the heart of Shanghai.

“Most churchgoers of Moore Memorial Church are old local people who have moved far away, some of whom still came with help of their children,” Zhang says. “Our church also sees an increasing number of well-educated young Chinese joining in, who enjoy candle-lit services here. We hosted more than 200 baptisms in the first half of this year.” 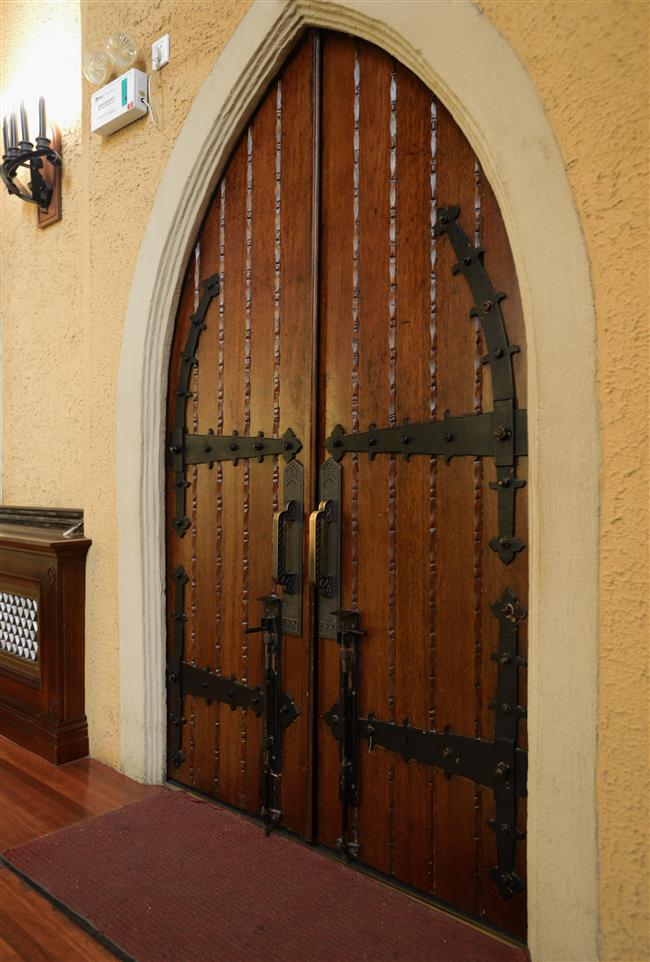 Tips: The church is open on Saturdays and Sundays. I would suggest you visit the other surviving Hudec church, Sieh Yih Chapel, at 1 Kele Road, Shanghai’s only Catholic church topped with a Byzantine dome which Hudec designed in 1929 and completed in 1931.