A shining 'star' built with class in Spanish style 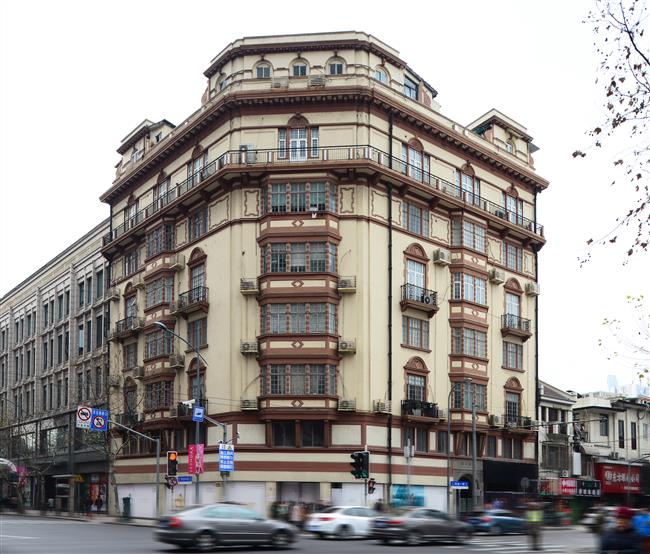 The Estrella Apartment Building, standing at the corner of Ruijin No. 1 Road and Huaihai Road M., is a dignified construction detailed in Spanish style.

Estrella means “star” in Spanish, which seems an apt name for the Estrella Apartment Building designed by Laszlo Hudec in 1927.

Perched at the corner of Avenue Joffre (today’s Huaihai Road) and Route des Coeurs (now Ruijin No. 1 Road), the 7-story building that serves both commercial and residential purposes was a true “star” in the 1920s.

The construction looks dignified and restful, detailed in Spanish style with Renaissance and Baroque elements. The lower two floors compose the plinth while the third to sixth floors are punctuated with shallow balcony decorated with protruding windows and cast-iron patterns. The top of the building is composed of continuous balconies and cornices.

Strong Spanish elements are featured all over the edifice, ranging from the patterns on the window lintels, the bamboo-like thin columns set as the glazing bars of the protruding windows, and the geological patterns made of mosaics on the ground and on the wainscot.

The contrasts between creamy walls and the red-brick molding showcase a tone of traditional Eastern European architecture.

Italian architect Luca Poncellini attributes Hudec’s use of Spanish motifs largely to the cut-throat competition of Shanghai's real estate sector, where “architectural exoticism was providing the building a sort of extra value, from a marketing point of view.”

“The impressive Estrella Apartments block rises out from the surrounding environment made of smaller constructions ... its style follows the Spanish tradition and it was built in the center of the French district carved out from Chinese soil,” reviews the scholar who authored “Laszlo Hudec.”

“The most interesting thing is that Laszlo Hudec had the chance to apply everything he had learned from Spanish architecture from his long travels in Spain and southern Europe in the early 1920s,” Poncellini says, adding that there were many hand-drawn sketches of Spanish historical buildings collected in Hudec’s archives.

From rickshaw to Estrella

The property was developed by China Realty Company development agency, which was foundered by merchant Alberto Cohen.

After moving to Shanghai from Constantinople before 1910, Cohen made a fortune from the rickshaw business and later devoted his attention to real estate, which promised fast returns and consistent profits.

When his Estrella Apartment Building was erected in 1929, the merchant was reckoned as one of those “who have contributed to the progress of Greater Shanghai” by Jewish English magazine Israel’s Messenger. The same magazine published a series titled “Modern Shanghai Jewish Contributions.”

“The City of Shanghai is developing day by day. The beautiful architectural aspects are growing apace with the advance of the Settlement’s growth and expansion,” the 1929 magazine reports. “No visitor to Shanghai from the West fails to admire it and pay a meed of tribute to the foreigners for their share of duty in developing the ‘Model Settlement.’ Jews who have lived in Shanghai ever since the port was opened to foreigners are proud of the fact that they have done pioneer work in the upbuilding for the ‘Garden City’.”

At that time, Avenue Joffre, where this “star” building sat, was the most valuable part of the then French concession, similar to Nanking Road in the International Settlement. Shops of all sizes were being built along its entire length, along with high-end residences and foreign consulates.

The middle part of Avenue Joffre was known as “Neva Road of St Petersberg” since a rainbow of Russian shops had filled the land between Rue Massenet (now Sinan Road) and Shanzhong Road (now Changshu Road). The exotic Estrella Apartment Building merged perfectly in this backdrop.

According to Shanghai city records, Avenue Joffre was flanked by apartments, tall buildings and new and old lane houses in the mid-1920s and early 1930s. Trees mixed with numerous small shops selling delicate, specialized products created a relaxing atmosphere for shopping. The city’s second shopping street other than Nanking Road had taken shape. 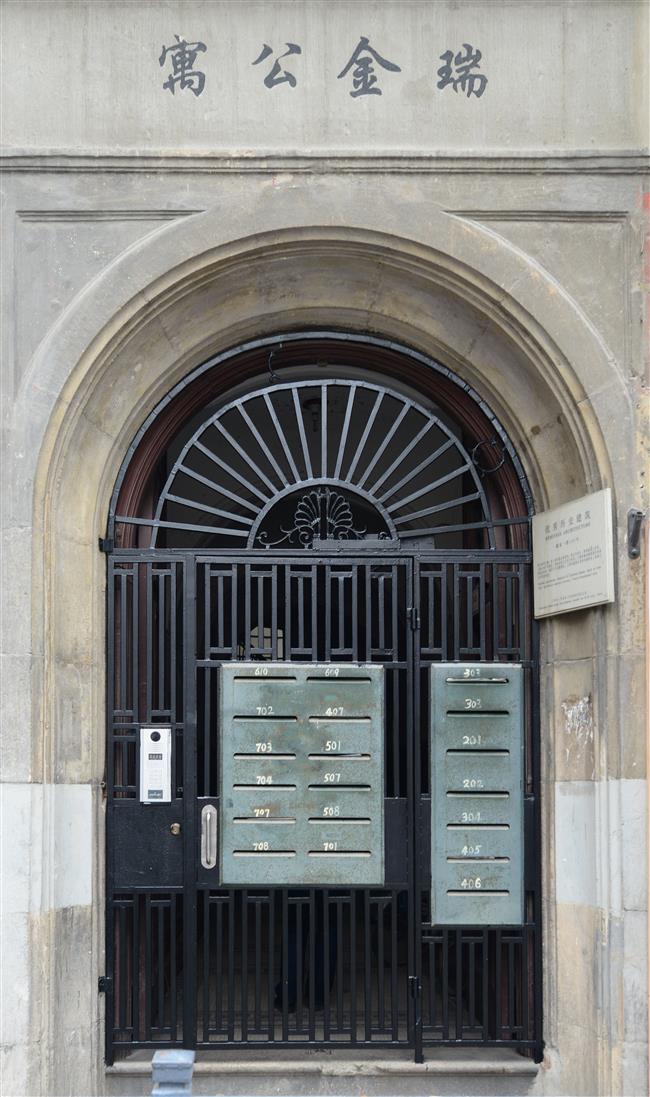 The entrance of the building on Ruijin No. 1 Road still shows architect Hudec’s original design.

A tendency to extend upward

The value of land in that district was so high that most of the new buildings had a tendency to extend upward, and the most popular type was the apartment house with shop frontage, such as Estrella Apartment Building. Its ground floor was given over to five attractive, spacious shops, some of which had been rented by old established firms soon after its completion.

The main entrance that led to the lift and to artistic, winding stairs with large, bright windows gave a very inviting impression.

Hudec not only designed but also supervised the construction, which was one of the city’s first apartment buildings equipped with all such modern conveniences as garbage incinerators, mechanical refrigerators, tin-lined closets for linen, recessed ironing boards, camphor closets for summer storage and box rooms.

The 1929 Israel’s Messenger has painted a vivid picture of the chic flats:

“All the closets are divided, part to be used in summer and part in winter, with all necessary shelves, hooks, rods, etc, to turn the duties of housekeeping into a pleasure. Even the minutest detail has been given careful study, providing, in the entrance hall, a closet fitted with hat and umbrella stands, with a door and large mirror. Each apartment is furnished with a letter box on the ground floor, near the elevator, with small holes conveniently placed so that the tenant may at once see whether or not there is any mail for him.” 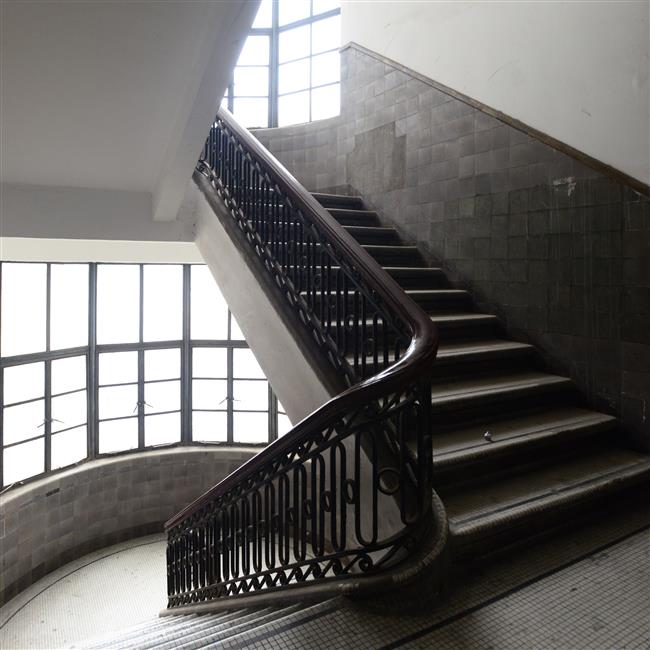 Although the interior of the Estrella Apartment Building is rather dusty, it has been amazingly well preserved with the original staircase, windows and tiled floors.

Even from today’s standards, the kitchens and the bathrooms in the dream apartments are not outdated.

“The kitchens are fitted with gas or electric stoves, large modern sinks, white enameled cupboards, with divisions for flour, sugar, dishes, etc, and an attached pantry contains the mechanical refrigerator, of Kelvinator manufacture, and a small balcony at the back facing the garbage incinerator.”

The bathrooms were installed with “recessed bathtub in an arched bay, curtained showers, recessed soap and toothbrush holders, towel rail, tumbler holder, etc, medicine chest, and a mirror over the lavatory with an electric light on either side of it for the comfort of shaving.”

In addition, all floors throughout the apartments were of oak, waxed and polished. The rooms were bright and airy, and the entire building was fitted with steel casements. This property would seem attractive to renters even today. In 1943, Route des Coeurs was renamed Ruijin No. 1 Road and Estrella also got a new name — the Ruijin Building.

Today it remains mixed-use, with shops on the lower two floors, Shanghai Yimin Commercial Investment Development Co Ltd — the building’s current owner — in the middle and long-time residents on the top floors. The interior is rather dusty but amazingly well preserved with the original staircase, windows and tiled floors. The building has served as the famous Dafang Silk and Cloth Store since the 1950s.

“During the era of planned economy, cloth quota tickets were required when buying cloth. So the queue fronting the store was so long that it often lined far up to the Cathay Flats,” says Wang Shuqing, general manager of the Yimin company, who has sifted through the firm’s archives and talked to veteran employees.

“The store which also offered tailor services was famous for its bu pian (leftover fabrics),” Wang adds. “The fabrics left by one customer could be used by the next one for making a collar, a pocket or a cuff if he/she bought the same fabrics. The cost could be saved a little. A result from the shortage of material, bu pian is a warm memory of the thrifty era, materially poor but mentally rich.”

In the 1980s Yimin company, which owned many properties along the former Avenue Joffre, purchased the former Estrella Apartment Building and leased the ground floors to retailers. Jewelry brand I Do and Zoo Cafe will be new shops opening soon.

“I have to say that the Estrella Apartment Building is not among my Hudec favorites,” Poncellini chuckles. “Although it has a very modern conception of the residential spaces, for my taste it is too much designed in style.”

“Nevertheless, it is a brilliant exercise of architectural design. The question is, ‘did the client require the Spanish style, or did the architect persuade the client to use that style?’ And in both cases, why a Spanish-looking building in the former French concession? For originality, for fashion, for distinction, for any other personal reason?”

While the question hangs over the mind of the young Italian scholar, Hudec’s “star” building shines on Huaihai Road everyday with its strong, signature Spanish motifs. 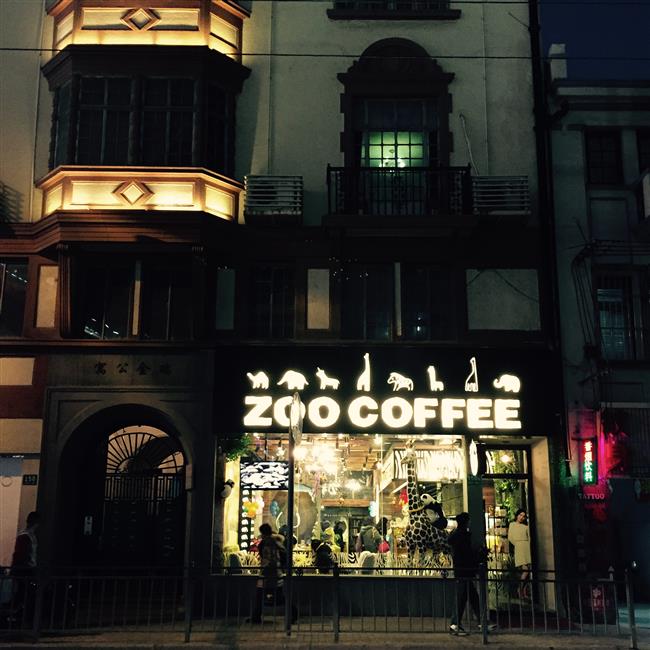 The ground floor is now open as a cafe.

Tips: The building can be appreciated from Huaihai Road M. and Ruijin No. 1 Road. The ground floors are open as a cafe and a jewelry shop. If the door on Ruijin No. 1 Road is open, you may enter to appreciate the original staircase and windows — very dusty but beautiful.